“I didn’t want to regret that decision 10 years from now, looking back at 2020, thinking I was spreading the virus instead of trying to fight it.” 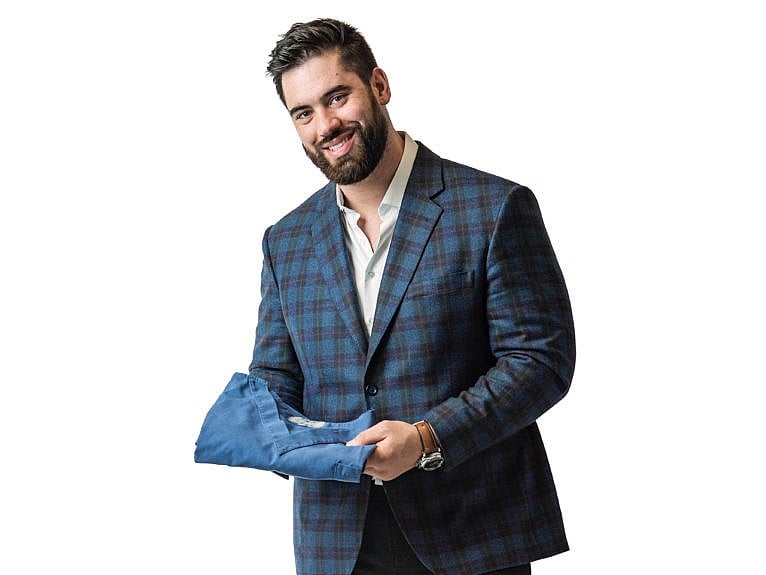 Laurent Duvernay-Tardif. This portrait was taken in accordance with public health recommendations, taking all necessary steps to protect participants from COVID-19. (Photograph by Will Lew)

Laurent Duvernay-Tardif was on the field for the final play of Super Bowl LIV, in February 2020, as confetti started to rain down. He threw his arms around Patrick Mahomes, the Kansas City Chiefs’ MVP quarterback, as cameras—followed by other Chiefs teammates, their family members and their friends—swarmed around.

There were 62,000-plus people looking on from the stands, and that crowd was nothing compared to the nearly one million Chiefs fans who showed up days later for Kansas City’s victory parade. Soon after, Duvernay-Tardif was back home in Montreal, where yet another parade honoured his status as the first Quebec-born player to win an NFL championship. It was a whirlwind of unforgettable moments, which took on greater meaning given the events that followed: “I have such vivid memories of the Super Bowl last year,” he says. “First, we won—but also, it was the last time we could get together.”

Duvernay-Tardif’s teammates call him “Doc.” The offensive lineman graduated from McGill University’s medical school in 2018, but had not yet completed his residency when the COVID crisis started in Quebec. Still, he put his NFL career on hold—deferring his US$2.75-million salary—and reached out to local health authorities to offer his help. That’s how a six-foot-five, 320-lb. star athlete wound up with a part-time gig as an orderly in a long-term care facility outside Montreal, where his duties included handing out medication, drawing blood samples and inserting urine catheters. “After seeing the impact of COVID-19 first-hand, it didn’t make sense for me to play football,” he says. “I didn’t want to regret that decision 10 years from now, looking back at 2020, thinking I was spreading the virus instead of trying to fight it.”

Duvernay-Tardif’s new teammates were exhausted by work that could be as soul-crushing as it was gruelling. In a long-term care facility, he notes, a single positive COVID test can throw the entire staff into overdrive. “You basically rush to [the patient’s] room and strip them of their belongings. They’ve been confined to their room for months, and suddenly you tell them they have to go to a red zone, which is often a cafeteria arranged with stretchers. And you know the odds of them coming back, which takes a toll on the patient, obviously, but also on everyone.”

READ: The reeve of this Manitoba county has taken centre stage among COVID deniers

As “Doc” watched football games from home—at least, those he could catch between orderly shifts and continuing his education online at Harvard’s T.H. Chan School of Public Health—he received applause for his contributions on and off the field. Sports Illustrated named him a “Sportsperson of the Year,” awarded this year to five activist athletes who also won championships; and he was co-winner, alongside soccer superstar Alphonso Davies, of the Lou Marsh Award, which goes to Canada’s top athlete. “I’ll never be as good an athlete as Alphonso. I can barely run,” says Duvernay-Tardif, laughing. “But this year it was important to acknowledge there was something bigger than sports.”