Why parental leave rules are shutting out dads 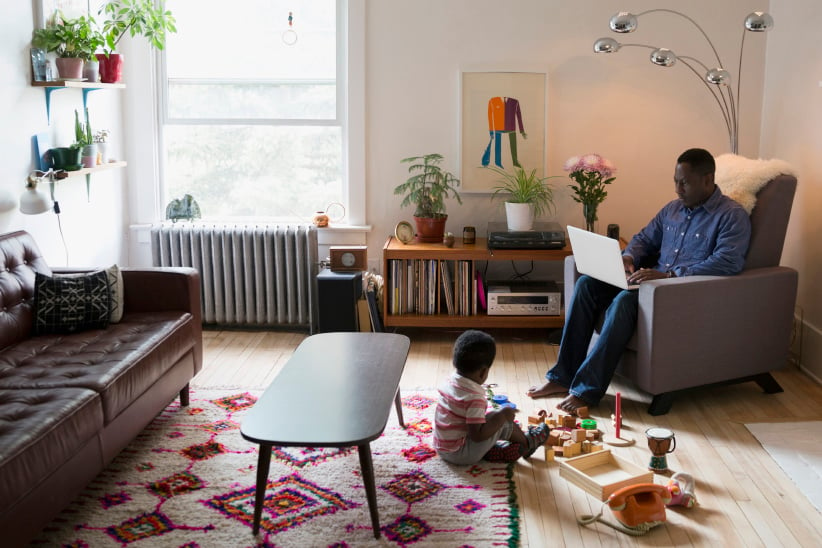 Parental leave reserved exclusively for fathers—like Quebec’s use-it-or-lose-it “daddy-days”—is often held up as a way to encourage more new fathers to take time off, eventually creating more family-friendly workplaces for everyone, and as a way to get more dads participating in childcare down the road. But a new report from the Institute for Research on Public Policy (IRPP) takes a deep dive into Canada’s maternity and parental leave benefits and finds that evidence for those claims is “mixed at best” and in fact, there are some counter-intuitive downsides to dads-only parental leave.

The report, authored by Jennifer Robson, an assistant professor at Carleton University, finds big gaps in the system, particularly for low-income families or parents who don’t work a standard full-time job employed by someone else. And encouraging more couples to share parental leave and childcare duties is still very much a work in progress.

Canada’s Employment Insurance system provides benefits to parents who take time off work after the birth or adoption of a child. That amounts to 15 weeks of maternity benefits that can be used only by the mother, and 35 weeks of parental leave a couple can divide up as they wish, with benefits covering 55 per cent of a person’s salary, up to an annual maximum of $51,300.

But Robson argues for something she describes half-jokingly as “publicly heretical”: after 46 years of the current system, it’s time to take a hard look at those mom-only weeks and how they may effectively discourage fathers from taking time off. “I wonder if there’s a bit of path dependency, where because we force moms to start the leave, it ends up treating dad’s leave as leftovers,” says Robson, who specializes in social policy, program design and household decision-making. “We often talk about parental leave benefits in Canada like it’s the mom’s entitlement. And then we ask questions like, ‘How much time are you going to give your husband?’ ” She makes a case in this report that the best way forward may be flexible, transferrable leave that parents can divvy up as they wish.

Quebec parents, meanwhile, are covered by the Quebec Parental Insurance Program (QPIP), choosing from a “basic plan” providing 55 weeks of benefits at a lower weekly rate or 43 weeks at a higher rate. Similar to the federal program, the first 15 or 18 weeks is reserved for moms only, but in Quebec, fathers also receive three or five weeks for them alone; the couple shares the remaining weeks as they wish.

MORE: The collapse of parenting: Why it’s time for parents to grow up

Other jurisdictions, including Sweden and Germany, have also introduced chunks of parental leave just for fathers. However, Robson finds this isn’t terribly effective in encouraging more equal leave and childcare. Research in Sweden shows that while 90 percent of fathers take at least one of the 480 days of paid leave available to couples after a child arrives, 78 per cent is still taken by mothers. What’s more, fathers are most likely to use that paid leave (which is available until a child turns eight) to extend vacation time. “Are we really changing workplace culture if we’re introducing reserved daddy-days, but in practice it’s playing out as a way to extend or cover off vacation time?” Robson asks.

In Quebec, since QPIP came into effect in 2006, couples are much more likely to report that both partners collected parental leave benefits (59.4 per cent in 2014, compared to 4.4 per cent in the rest of Canada). But the IRPP report finds that Quebec parents were more likely to share leave in the first place (14.1 per cent in 2005, compared to 5.8 per cent elsewhere in Canada). That poses a chicken-and-egg conundrum, Robson says: are jurisdictions where dads already take more leave and help with childcare more likely to introduce dads-only leave, or does that policy actually drive a change in behaviour?

A 2014 German study she found unpacked exactly that, examining parental leave and couples’ behaviour and workload at home in eight countries, including Canada, the U.K., Germany and Sweden. The study authors separated out country-specific cultural characteristics by controlling for things like typical hours spent on housework, childcare and cooking, as well as the female employment rate. “When you left those cultural factors, it kind of looks like leave for dads makes a difference,” Robson says. “But then once you control for those cultural factors, it actually turned out it was the countries with shareable leave that saw an increase in the amount of time spent caregiving by dads, or at least a shrinking of the gender gap in hours spent.” In countries with dads-only leave, fathers actually spent less time on childcare once those cultural factors were controlled for.

There’s also an inequality problem when it comes to parental leave, Robson says. Higher-earning and more educated dads are more likely to take time off, which could be due to holding jobs that offer the hours and income to qualify under EI, and to different workplace cultures. Outside of Quebec, people with incomes above $60,000 will frame it as a choice: mom wanted to take the time off. But among parents making less than $40,000 a year, one in five say the reason a spouse isn’t taking leave or collecting benefits because they’re not eligible.

Back in the fall, the federal government launched consultations on potential changes to Canada’s parental leave benefits, including the possibility of extending a lower rate of benefits for 18 months—an idea that was popular with citizens. But, Robson warns, adopting something like Quebec’s daddy-days is not the way to go. “I think that there just isn’t solid evidence that dedicated leave encourages more dads to take leave relative to other available options,” she says. “It’s not like the daddy-days solves the workplace culture issue. What solves the workplace culture issue is time, generational experience.”