Anne Kingston: Louis C.K. and others have combined ego, id and male privilege to create a pornographic portrait of harassment by powerful men 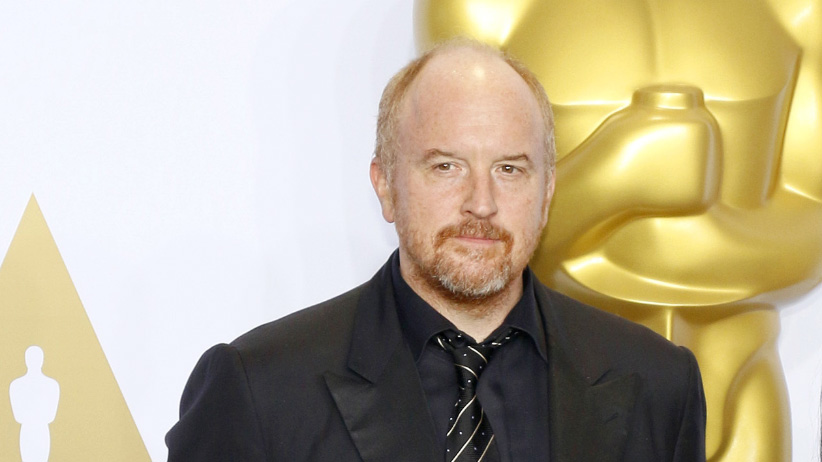 Since six women reported producer Harvey Weinstein masturbated in front of them—once into a potted plant—the list of A-list wankers has mounted daily. More than a dozen harassment charges against journalist Mark Halperin include a former female employee at ABC News reporting that the Game Change co-author played with himself under his desk while discussing her career. Former Hollywood power players Brett Ratner and James Toback both have been accused of exposing themselves and masturbating in front of shocked, frightened and disgusted women. On Friday, comedian Louis C.K., admitted to what has been long-rumoured—that he practiced onanism in front of women in a hotel room, in his office, and while speaking on the phone. The very next day brought news that actor Richard Dreyfuss harassed a former female employee with behaviour that included exposing his penis.

In retrospect, “Fearless Girl” was a timely, if exploitative, PR gambit by State Side Global Advisors, the financial giant that positioned the child opposite “Charging Bull” on the eve of International Women’s Day. The stated intent was to telegraph a progressive message—specifically, to challenge companies to add more women to their boards. If the little girl also helped sell units of the company’s new fund, SHE, then so much the better.

“Fearless Girl” was a ready-made crowd-pleaser in a metaphorical “You Go Girl!” way. New York Mayor Bill DiBlasio referred to the sculpture as “this miraculous girl” who “appears and creates such a powerful sensation because she spoke to the moment.” The little girl symbolized a new world where “women were not going to live in fear, that women were going to teach their daughters and all the women in their lives to believe in themselves,” the mayor said, a statement that should be redundant in 2017 but isn’t. 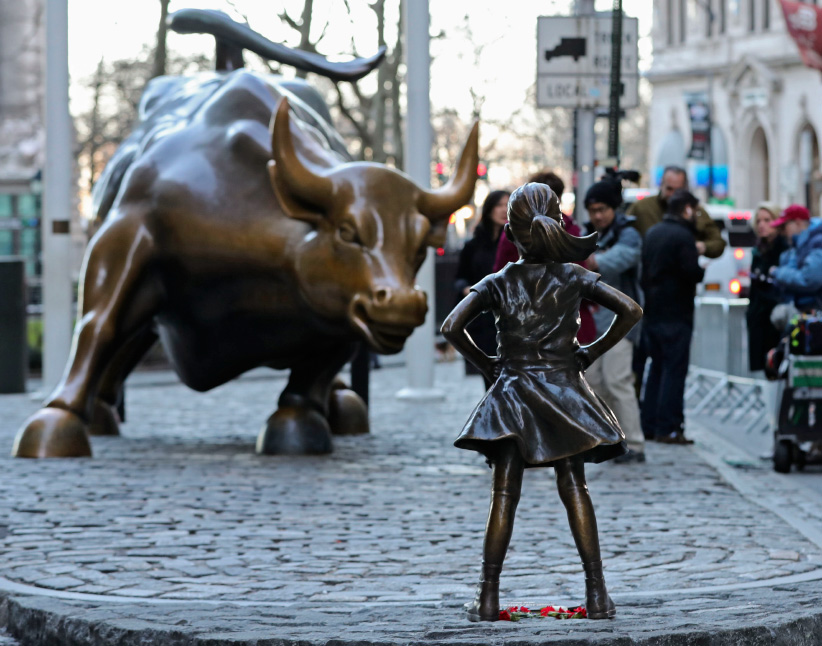 In real life, of course, sticking a little girl in front of a charging bull is child abuse, not unlike a the spectre of a 14-year-old girl “dating” a 32-year-old Alabama district attorney. Any sentient person should have looked at the staged tableau and shouted: “Run, little bronzed girl, run! This won’t end well for you.” As it happened, State Side Global Advisors’ progressive patina would turn out to be as faux as Louis C.K.’s: in October, it was discovered the firm had been ordered to pay a $5-million settlement to more than 300 female employees it underpaid.

What both images—powerful bull v. little girl; powerful, bullish man v. female employees—share, however, is an unequal power dynamic steeped in phallic visuals. The French philosopher Jacques Derrida coined the term “phallocentric” to describe societies in which the penis represents male dominance, and it certainly pops to mind here. Phallocentrism is so entrenched we don’t even notice it—if you’re brave, you “have balls”; the “seminal” is used to describe events that are pivotal or groundbreaking; Hollywood remains fixated on guns and machismo. Then there’s the Wall Street bull itself—celebrated as a symbol of Western capitalism and wealth—whose genitals have been burnished to a high gloss by tourists rubbing them for good luck.

That, in a snapshot, describes sexualized violence or harassment more broadly: asserting power through sexualized behaviour. This is a fact Louis C.K., once celebrated as a male feminist, doesn’t understand, as his statement reveals. He justified his behaviour because he asked  women for their “consent,” the comedian writes: “At the time, I said to myself that what I did was okay because I never showed a woman my dick without asking first,” an assertion that’s not true. What he didn’t understand was that the question itself constitutes harassment.

It’s apparent Louis C.K. still doesn’t understand the dynamic he exploited: “But what I learned later in life, too late”—presumably upon news that the New York Times was about to expose him, figuratively speaking—“is that when you have power over another person, asking them to look at your dick isn’t a question. It’s a predicament for them.” Again, no: A “predicament” is being locked out of your house. Having a man who’s at the top of an industry that you work in or are trying to break into asking if you want to see his genitals is aggressive, assaultive, intimidating behaviour.

RELATED: Me too: It’s not just Hollywood, it’s Canada

Dreyfuss also doesn’t get it. The actor said he’s “horrified and bewildered” that a former employee is reporting harassment, though he didn’t deny it. Like Anthony Weiner, now serving 21 months in prison for texting images of his genitals to a minor, Dreyfuss believed putting his privates on display was a treat for women. Exposing himself was “part of what I thought was a consensual seduction ritual that went on and on for many years,” said Dreyfuss, whose son Ben recently reported that Kevin Spacey groped him years ago. Dreyfuss needs to be told that if you’re engaged in a “consensual seduction ritual” that goes on “for many years,” it likely isn’t consensual.

The only thing that distinguishes a Weinstein or a Louis C.K. or Richard Dreyfuss from the more common creepy, exhibitionistic masturbators who lurk in subways or theatres, and often prey on children as young as “Fearless Girl”, is their privilege: their money and their fame has insulated them from consequence, until now. Now a growing battalion of women who’ve paid a steep price—in intimidation, in careers being sidelined, in being unable to make art the world has never seen—are angry and fighting back with another power unit Hollywood understands: money. Gal Gadot has said she won’t participate in Wonder Woman 2 if Brett Ratner is attached to it. She’s only one voice in a growing chorus that finally realizes they can’t face down human charging bulls alone.