Why the escalator etiquette of 'stand right, walk left' is wrong

Whether riding escalators or merging traffic, people feel they know what's fair—and it's messing with the work of transit operators and traffic planners 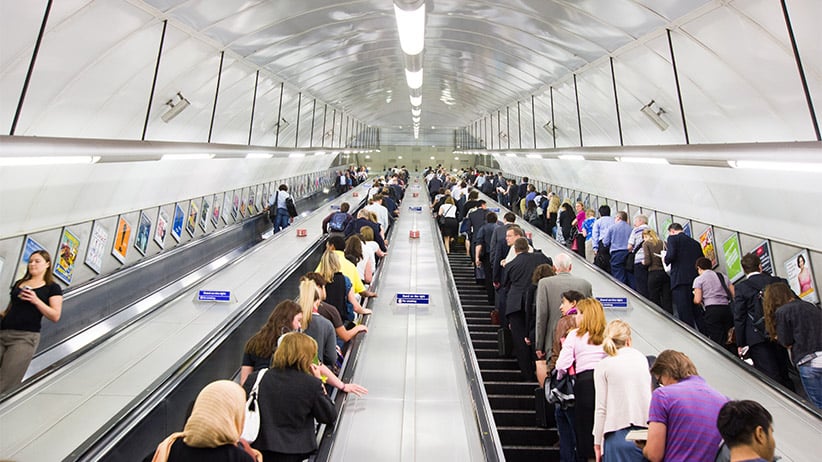 The modern escalator debuted in 1900 at the Paris Exposition—to great wonder and acclaim. Four years later, Canada had its first wooden version in a downtown Toronto department store. By 1911, the escalator was an integral part of the London subway system. And with it came proper escalator etiquette.

Stand on the right, walk on the left. This familiar rule allows folks who’d prefer to let the machinery do all the work relax to one side while those in a hurry squeeze by on the left. It seems eminently fair, since all levels of patience and energy are accommodated. But what does this say about human nature? And can it change?

Last month the Nanjing subway system announced a campaign to abolish standard escalator behaviour. Because the vast majority of Chinese commuters prefer to stand, the equipment is wearing unevenly. “About 95 per cent of the escalators have severe damage on their right side,” the Nanjing Metro stated on their social media account, according to the South China Morning Post. “Standing on the right and walking on the left is no longer recommended.” The newspaper reported numerous objections to the move. “If I don’t stand to the right, others will see me as rude,” said one commuter.

Escalator etiquette is also under threat in Britain, where operators of the London Tube have come to the same conclusion about user preferences as their Chinese counterparts: more people stand than walk. Rather than worrying about wear-and-tear, however, their plan to end the stand-right, walk-left habit is meant to increase throughput; standing on both sides of an escalator allows for a possible 30 percent increase in total capacity. Despite convincing mathematical arguments, however, plenty of folks have complained about the change. The ability to scoot past tourists and other laggards is a deeply ingrained tradition among Londoners. A similar campaign in Japan in 2014 was widely ignored.

In 2007 the Toronto Transit Commission took down signs promoting stand-right, walk-left in their subway system for safety reasons, but there’s been no official effort to end the practice. Folks in a hurry still make ample use of the left-side pass, and everyone else accommodates them.

Resistance to changing a system that allows some people to zip past those who prefer to line-up is more than just a frustration for subway operators. It also seems deeply ironic given the difficulty transportation advocates have in trying to convince drivers who prefer lining-up to allow other cars to pass them on the right.

Consider the zipper merge, the escalator dilemma’s mirror opposite.

When road construction signs announce a lane closure, traffic must necessarily merge in response. Many drivers complete this move as soon as possible to avoid any later unpleasantness and maintain their place relative to other drivers. Unfortunately, this results in long line-ups of cars merging well before the lane actually disappears.

To avoid unnecessary congestion, traffic planners recommend merging as late as possible using a back-and-forth zipper pattern at the closure point. Merging near the obstruction makes full use of all available road space, and can reduce unnecessary congestion by as much 40 percent, according to research from Minnesota.

Pushing against these scientific arguments, however, is the perception that a zipper merge allows late-merging drivers to steal a march on those who have dutifully merged early to reduce hassles. We’ve all felt the bile of injustice rising as a hard-charging driver races past on the right to merge ahead of us. Grim warnings and hand gestures often follow.

To overcome this reaction and improve travel times, the Alberta Motor Association (AMA) last month unveiled a campaign to promote the zipper merge. “It’s OK to cheat — in fact AMA encourages it!” reads the headline. “The zipper merge goes to the core of what people believe to be fair. We’ve always been told to line-up and be patient,” admits Jeff Kasbrick, the AMA’s vice-president of government and stakeholder relations. “It seems unfair to watch someone zip past us.” He hopes drivers will embrace the concept on efficiency grounds, in spite of their instincts.

Yet a recent trial of the zipper merge in Winnipeg had very little effect on road speeds, perhaps because drivers weren’t willing to make room for late-mergers. “I’ve learned people don’t usually let you in when you just cut everyone,” Jesse Konchuk told the local CBC.

But how can two diametrically opposed habits both be considered fair?

It depends on what we mean by fairness, says Byron Williston, a philosophy professor at Wilfrid Laurier University in Waterloo, Ont. “While the concept of fairness is likely universal, what counts as fairness is culturally specific.” Notions of fairness arise out of an accumulation of habits and values that can widely vary across societies or circumstances. Plus, arguments promoting efficiency over perceptions of fairness or self-interest aren’t likely to be convincing for most people. “Nobody apart from technocrats, social planners and economists really cares about efficiency,” the philosopher observes.

In his recent book “The Fairness Instinct,” biology professor Lixing Sun of Central Washington University in Ellensburg, Wash. argues humans are born with a natural sense of fairness, the same as can be observed in capuchin monkeys and other primates. “Decisions we make about fairness are connected to our emotions, rather than careful reasoning,” says Sun. “These are instinctive and evolved reactions—we care about others.” The flip side of this instinct is that we scorn those perceived to be taking unfair advantage. “Free riders violate our caring instincts and provoke feelings of injustice,” he observes.

So why do we consider it fair to let others pass us on an escalator, but not on the road? Sun says his experiments suggest a sense of familiarity is necessary to activate our caring instincts. On an escalator, we’re close enough to see and touch one another, and so accommodation is offered. On the road, however, we’re encased in metal and glass and largely estranged. “The more people can recognize each other, the more likely we are to care,” says Sun. Possible solution to greater zipper merge acceptance? All-season convertibles.