What it means to wear a hoodie

Why the hoodie should not be a symbol of criminal intent 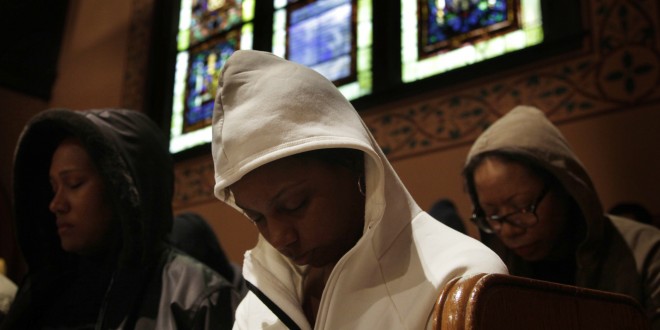 When George Zimmerman put in his call to 911 in Sanford, Florida, moments before he shot unarmed 17-year-old Trayvon Martin in his own gated community, the first two descriptors of the “suspicious” male he reported to dispatch were “black,” and wearing “a dark hoodie.”

The dangers of being black are well documented in North America. However, the hoodie, which has carried a very specific valence in other western cultures (their criminal connotations are so strong in England, New Zealand and Australia that they’re banned in various shopping centres in each country), wasn’t much of a flashpoint here in the 40-some years it’s been around. Until, that is, the Trayvon Martin shooting and subsequent Million Hoodie Marches.

Geraldo Rivera, a man best known for having his nose broken in a skinhead brawl on his own TV show in the 80s, added fuel to the fire on Friday when he commented to Fox TV that he was “urging the parents of black and Latino youngsters particularly not to let their children go out wearing hoodies. I think the hoodie is as much responsible for Trayvon Martin’s death as George Zimmerman was.”

Uproar ensued. Like the Toronto police officer whose careless comment that women should avoid dressing like “sluts” if they wanted to remain safe, Rivera seemed to be speaking out of some protective instinct. The sad point that they both failed to make was that crimes against women and young Latinos and black men will continue to happen no matter what they are wearing, and placing the blame on the victims gets people’s backs up. However, unlike Officer Sanguinetti, who was schooled in a major way by the SlutWalk, Rivera should have known better – he was speaking in the wake of the Million Hoodie March.

Daniel Maree, a 24-year-old South African transplant to New York, is a digital strategist at global marketing giant McCann Worldgroup. He’s also a black man who wears hoodies. The march was his idea. He wanted, he said, to turn the hoodie from “a symbol of suspicion to a symbol of empowerment.”

When you pack the streets with thousands of people dressed in hoodies, one thing becomes clear: even though it’s been a hip-hop staple for years, the hoodie in North America does not belong to any one subculture or youth group. Like jeans, it’s a piece of clothing that’s probably worn every postal code in the country. It is, let’s face it, sartorial fast-food, a schlubby, collegiate garment designed for comfort and convenience, and equally at home on a jogging yuppie as a school kid of any colour, but especially on teens.

I had a 15-year-old student in one of my English classes in Japan who did not like me very much. (She didn’t like a lot of things very much, except, inexplicably, the piano stylings of Richard Clayderman). She was tall and athletic looking and I remember vividly the way she would nervously pull down the sleeves of her big red hoodie over her hands. In moments of particular discomfort, she would pull the drawstrings tight on the hood, so her features peeked out from a tiny O.

The desire to evade the feeling of being scrutinized is common to both teenagers and criminals, although for entirely different reasons. A hoodie is great for this. (It’s not a stretch to argue that, in the UK, where closed circuit televisions are everywhere, yobs came to use the hoodie as protection against constant visibility.)

How do you know someone’s intent in wearing a hoodie then? You don’t.

It was this confusion, in part, that cost Trayvon his life. It’s still unclear whether or not George Zimmerman, during his 911 call, referred to Trayvon as a “f-cking coon,” – he did mutter something under his breath, but it’s not perfectly audible. Still, even without this enormous hint, it’s not hard to imagine that a large part of what cost Trayvon his life was his colour.

The Million Hoodie March packed the streets with hundreds in what might as well be the national garb of the U.S.A. A hoodie, in North America is not yet, and should never become, a symbol of criminal intent.

What people fear when they look at the hoodie is not what it shows but what they think it conceals. Which was precisely Zimmerman’s downfall. When Zimmerman saw a black kid in a hoodie, he saw a criminal. He couldn’t see that he was staring at a kid with a handful of candy.