Why the Olympics are bigger than any one athlete

The Games indulge a kind of naked nationalism, so ... wave the flag, boo the villains, wipe a tear 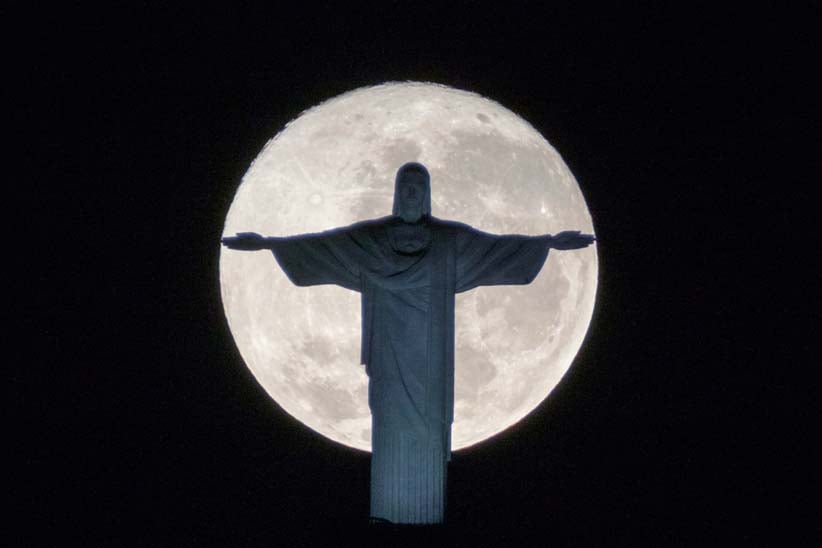 The silhouette of the statue of Christ the Redeemer stands out against the full moon in Rio de Janeiro; the city needs all the prayers it can get in advance of the Summer Olympics (Yasuyoshi Chiba/AFP/Getty Images)

War, the famous saying goes, is the continuation of politics by other means. You could say the same thing about the Olympics.

The success of the biennial sports extravaganza comes largely from the naked nationalism it inspires, the opportunity for audiences around the world to cheer on their own country’s athletes as they battle those from other nations. The expensive and elaborate pageantry this requires is made possible by a boastful urge among host countries to outdo the efforts of previous hosts in spectacular fashion. The Olympics, in other words, are the continuation of war by other, more peaceful, means. This is a good thing. It should stay that way.

With the Rio de Janeiro Summer Games beginning Aug. 5, the International Olympic Committee (IOC) faces a crisis of identity: is it an event in which individual athletes compete to see who among them is the fastest, highest or strongest? Or is it a competition between nations that happens to involve athletes? This soul-searching has been prompted by the massive Russian doping scandal. Evidence confirmed in a World Anti-Doping Agency (WADA) report last week by Canadian lawyer Richard McLaren reveals a stunning conspiracy within official Russian sporting and government agencies to operate a comprehensive national doping program that subverted international drug standards and hid the positive test results of Russian athletes. To protect the sanctity of sport, many have demanded Russia be banned outright from Rio. “It is a matter of tawdry, organized cheating,” bellowed Richard Pound, the Canadian founding president of WADA.

The Olympic committee’s carefully crafted response to these demands reveals much about how it sees itself. The entire Russian team has been disqualified on paper by the IOC, but individual Russian athletes may compete in Rio if they can prove to their respective sporting federations that they’ve never tested positive for drugs and have evidence of clean tests from reliable international laboratories. If accepted, however, they must still march under Russia’s flag.

Several Russians—notably whistleblower Yuliya Stepanova, a middle-distance runner who tested positive for banned substances in 2011 and subsequently provided WADA with crucial evidence of official Russian doping, and long-jumper Darya Klishina, who has lived in the U.S. for many years and is untainted by Russian deceptions—asked to be allowed to participate as stateless individuals under the IOC flag. This will not be allowed. “The Olympic Charter does not foresee such ‘neutral athletes,’ ” the IOC declared. Only athletes selected by their home country will be allowed at the Rio Games, even if those countries are proven and determined cheaters. By this measure, the Olympics is clearly a country-to-country competition. Athletes participate only as members of their national team.

Baffling to this conclusion, however, is a group of refugees competing in Rio under the IOC flag. This team consists of 10 athletes from refugee camps or who are otherwise stateless; five were born in South Sudan, others come from Syria, Ethiopia and Congo. Of them, only one—Ethiopian marathoner Yonas Kinde—could have qualified for the Olympics based on personal performance criteria alone. As neutral athletes, they comprise a category apparently unforeseen by the Olympic Charter when the topic is medal-competitive Russian athletes. Their presence at Rio is a sporting conundrum.

In the interests of resolving this contradiction, the IOC made the right choice in denying neutral status to disaffected Russian athletes, and the wrong decision in creating a squad of disparate refugees. Such a team may provide succour to individuals who’ve faced great difficulties in life, and it offers the IOC some positive news coverage amid an otherwise scandal-plagued games (even if Team Refugee is certain to get creamed in competition). Nonetheless, the mere presence of stateless participants violates the essential concept of the Olympics as a forum for non-violent rivalry between nations. And it opens the door to future groups of neutral athletes to be admitted for similarly provocative political reasons.

Whatever the dictates of idealism, it’s not the performance of individual athletes that gives the Olympic Games their energy and excitement—it’s the competition between the countries represented by those athletes. The Olympics succeed because they provide an opportunity to indulge in a wild orgy of athletic tribalism every two years. National pride, rather than the purity of sport, is the reason Canadians come together to whoop and cheer and stay up until ungodly hours watching their fellow citizens compete in a variety of mostly obscure sports. Eliminate this chance to wave the flag, boo the villains (you know who you are, Team Russia) and wipe away a tear as the anthem plays, and the Olympics will quickly cease to exist as a shared global experience. It will be just another sporting event enjoyed by diehard fans and ignored by everyone else.

Preserving the communal essence of the Olympics requires recognition that countries, not athletes, are the real participants of the Games.