Why this month's Maclean's magazine has two covers

Our editorial: Generational friction is cyclical. It's with that in mind, the magazine this month captured two faces of a multi-sided conflict. 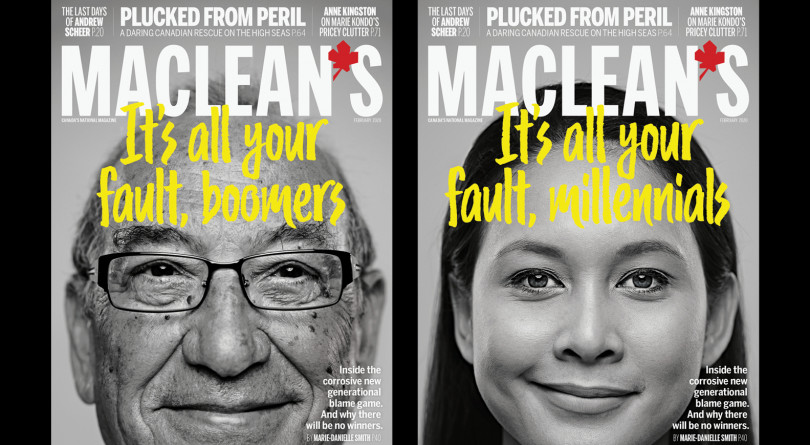 The always perceptive Heinlein is correct, of course, if somewhat limited in his ambition. Every generation not only thinks it has invented sex, but also music, art, politics, economics, morality, technology, education and the laws of social interaction, as well as the protest movements necessary to make all the change in those areas happen.

It is with this cyclical nature of generational friction in mind that the magazine this month has two different covers. “Inside the corrosive new generational blame game,” by Marie-Danielle Smith charts the current conflict between boomers and millennials, one of the defining struggles of our age. A younger generation bristles at the control still exerted by its predecessors, who in turn gripe about the changes being wrought.

COVER STORY: War of the ages

This reluctant passing/grabbing of the torch has long been a fixture of human interaction. Throughout history, youth have sought to displace their elders as the defining voice of their era, and in doing so, change society in dramatic ways. It was the boomers, after all, who loudly sought to define themselves in radically different terms from their hierarchal-minded parents—the so-called “Greatest Generation” who had survived the Great Depression and then won the Second World War. The clash between these two generational heavyweights in the late ’60s was as remarkable for its protests and upheavals as boomers vs. millennials is today.

Did everything change? Certainly not. Placard slogans such as “Ban the Bomb” and “Give Peace a Chance” were once as popular and widely debated as “OK boomer” is now. But nuclear weapons—as well as war itself—are very much with us today. And while many young hippies loudly declared their intention never to work for “the Man,” the market economy is still kicking around as well.

Of course intergenerational conflict can produce more than mere sound and fury. While popular complaints about war and capitalism may have proven themselves eternal, generational change can also deliver real, era-defining results. The ’60s, for example, were notable for major advances in civil rights, which have since evolved into our current embrace of a broad range of human rights. That decade heralded the unfettered entry of women into the workforce and new attitudes toward sex, love, diversity and personal choice—all unambiguously good things.

It is with this in mind that we applaud Generation Z for its clarity of vision in focusing so intently on the biggest and most pressing issues of our time, and in particular the crisis of climate change and the need to decarbonize the economy. But practical solutions to this emergency will not be achieved by pointless efforts at tearing away the essential fabric of society, or heaping blame on previous generations.

READ: A guide to the generations

It’s true boomers have not been the ideal stewards for future generations. Housing prices, public and private debt loads and rising inequality are all pressing concerns—let alone the ticking clock of the environment. But keep in mind also that the past several decades have proven to be among the most innovative and progressive in human history. And we desperately need to harness that boomer spirit of hopeful invention to have a chance of tackling the heroic challenges facing our millennial age.

Tackling climate change and creating a fairer, happier society are urgent, necessary tasks that demand an unprecedented degree of co-operation between generations. So OK boomer, OK millennial. Let’s get started.

This article appears in print in the February 2020 issue of Maclean’s magazine with the headline, “Why we did this.” Subscribe to the monthly print magazine here.