Why uniforms matter in the military

They’re always freighted with symbolism. But in the wake of the death of two soldiers, they suddenly mean so much more 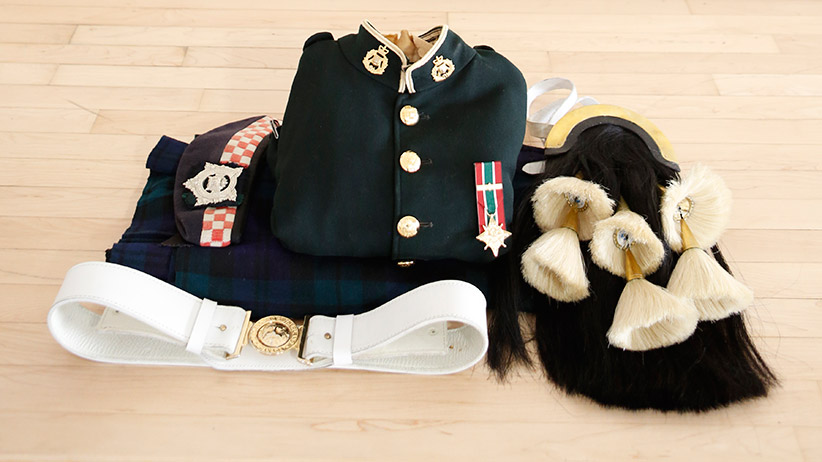 The ceremonial uniform of The Argyll and Sutherland Highlanders of Canada (Princess Louise’s) regiment. Photograph by Jaime Hogge.

Nathan Cirillo was wearing the full dress uniform of the Argyll and Sutherland Highlanders of Canada (Princess Louise’s)—kilt, sporran, tunic, hose, spats and cap—when Michael Zehaf-Bibeau shot him dead on Oct. 22, while Cirillo and fellow Argylls corporal Branden Stevenson were providing a ceremonial guard for the tomb of the unknown soldier. “In the first photos of the scene, you couldn’t see the soldier, only the people trying to help him,” says University of Toronto professor Robert Fraser, the Argylls’ regimental historian. “But his legs and the regiment’s distinctive red and white hose were visible. And the texts and emails started to come in: ‘It’s one of ours.’ ”

Uniforms matter to military men. Two days before Cirillo’s death, Martin Couture-Rouleau deliberately ran over and killed Warrant Officer Patrice Vincent. Military authorities responded by advising soldiers in Quebec not to wear their uniforms off-duty, a call repeated in Ottawa in the aftermath of the Parliament Hill shootings. For soldiers and many other Canadians, it was disconcerting. Did that advice indicate prudence or a nakedly open display of fear, one that should be countered by mass solidarity? That’s what Ottawa Citizen editor Andrew Potter seemed to indicate in his tweeted response: “Soldiers in Ottawa told not to wear uniforms to work. If we’re afraid they’ll be targeted, I’d prefer to see all of Ottawa don a uniform.”

Military uniforms and all they symbolize, from brotherhood to the modern state’s claim that its clearly set-off representatives are the sole legitimate agents of violence, now occupy a new and uneasy position in the national psyche. They’ve always been a complex symbol. And, in the wake of the two deaths—men targeted precisely because of their uniforms—Canadians are rallying to them, and perhaps looking at them with new eyes. In ordinary and orderly times—the definition of Canada usually—uniforms signal authority, but in violent times they suddenly confer fragility, an unsettling and novel situation for us. Before last week, and possibly still now, Canadians didn’t really think we were at war, not merely by virtue of sending six CF-18s to bomb targets in the Middle East and, presumably, kill people. Despite the uniforms, there is certainly no link in our minds, whatever may be in others’, between those pilots and a 24-year-old with an unloaded gun guarding a memorial. 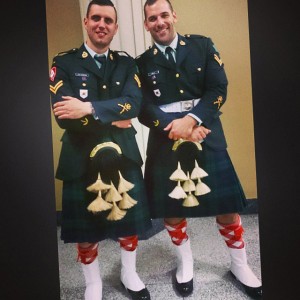 Of course, Prime Minister Stephen Harper tied them together in his brief speech after the shootings: “Attacks on our security personnel and on our institutions of government are, by their very nature, attacks on our country, on our values, on our society, on us Canadians.” And Rick Kennedy, the Argylls’ former commanding officer and now its honourary lieutenant-colonel, speaking from the regiment’s home base in Hamilton, Ont., where he was helping to plan Cirillo’s full military funeral, had no doubt that the corporal had died on duty. “That was as solemn a duty as the military has. Cpl. Cirillo was no toy soldier.”

Highland regiments like the Argylls were the making of the British Empire. “I found, in the mountains of the north,” British prime minister William Pitt told Parliament in London in 1766, “a hardy and intrepid race of men, [who] served with fidelity as they fought with valour and conquered for you in every part of the world.” Nowhere was the truth of that statement more evident than in Canada, where the Fraser Highlanders formed ranks on the Plains of Abraham in 1759, in the pivotal battle in this nation’s history.

The Highlanders have never really left here since: Canada has more “kilted” regiments in its armed forces than any other country. The awkward new—and very Canadian—term reflects the fact that they are now manned  by Canadians of every ethnic origin, drawn by the martial history and by the uniform. “The kilts and the pipes have become Canadianized,” notes historian Fraser, “and there’s only a little of Gaelic left now, mainly in the toasts. But the young guys still like the look, still like the swagger it gives them.”

Yet the British tradition, which we inherited, has never been especially military-friendly. As George Orwell noted, contrasting his nation with Germany, British officers in normal social situations habitually dressed in civilian clothes. Historically, military uniforms have been red flags not just to national enemies, but to citizens suspicious of government control. It’s impossible to imagine anyone pulling off in Canada what Wilhelm Voigt, shoemaker and ex-con, did in Germany in 1906: After acquiring a full army captain’s uniform from a number of thrift stores, Voigt commandeered a dozen soldiers in Berlin, and led them onto a train to the nearby town of Kopenick, where he arrested the mayor, seized 4,000 marks and ordered the soldiers to guard city hall while he returned to Berlin. Upon his arrest a few weeks later, Voigt became a folk hero, not least, in the U.S. and Canada, where he enjoyed a successful lecture tour, celebrated for his mockery of German military obeisance.

Canadians became more comfortable—or, at least, familiar—with their military during the two mass occasions of the nation-in-arms in the two world wars of the 20th century. The second of those saw an astonishing 10 per cent of the population in uniform, but even in those heroic times—as we see them through an almost nostalgic lens—neither military experience reached its full extent without savage and hugely divisive battles over conscription. What truly cemented the Canadian Forces in the esteem of their compatriots was their decades as UN peacekeepers (rewarded with a Nobel prize in 1988), their stellar work during natural disasters at home, and the stoic idealism they displayed during the steady, dispiriting run of casualties soldiers endured in Afghanistan, even if most Canadians had long since averted their eyes from the mission by its end. And, as the citizen-soldiers of the world wars pass away—the last First World War vet died in 2010—Canadians, whatever they think of the military as an institution, have only seen their respect grow for individual soldiers. 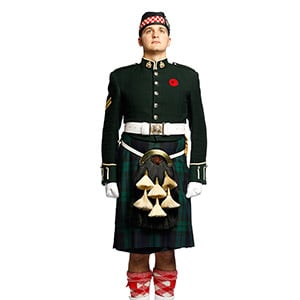 But if uniforms are ambivalent symbols for the civilian population, they are totemic for the military, especially for Highlanders. In the years after Confederation, when prosperous Scottish-Canadian civic groups, caught up in imperialistic fervour and social ambition, started petitioning the federal government—only Scots “of the better sort, who owned their own houses,” would be allowed in, the founders of the Argyll and Sutherlands assured the minister of militia in 1903—their chief obstacle was money. Then—as now, veterans’ advocates would say—Ottawa did not want to spend money on soldiers and, particularly, not on those with expensive kit. “Kilts are expensive, sporrans are expensive, the hose is expensive,” explains historian Fraser. The eventual compromise meant the reserve regiment could form, but its members were financially responsible for the very dress that makes them Highlanders—meaning, of course, that only Scots of the better sort could join.

The Argylls have a distinct tartan, and unlike Canada’s most senior kilted regiment, the Black Watch, the Argylls box their pleats while the Watch’s kilts are knife-pleated. The Argyls’ Glengarry caps are unique in their red and white dicing; other Highland regiments have black squares alternating with red. The biggest distinction beyond the kilts lies in the sporrans, explains Lt.-Col. Kennedy. “Ours has long, black horsehair with six short, white tassels—the ‘swinging six,’ we call them, for the way they move when we march.”

All those fine details matter, for reasons of recognition, esprit de corps, identity and pride. The Highlanders certainly quibble amongst themselves about who looks best, but they agree they surpass—“without a question,” laughs Kennedy—the poor drabs of the non-kilted forces. The details matter, too, because the kilted regiments remain on the financial hook to this day. “It costs over $2,500 for a regular soldier,” says Fraser, “and much more for an officer”—that’s $5,000, to be exact, which is less than the $10,000 it costs a piper—all willingly paid to belong to a storied regiment that, by any reckoning, has more than earned its way. Argylls piped the Canadian Corps across the Rhine and into Germany in late 1918 after the Great War was won, and commanded the Canadian Berlin Battalion in the victory celebrations in Berlin in July 1945. The Argyll and Sutherlands suffered 1,174 dead in the Great War and 285 in the Second. Since then, despite continuing service, including in Afghanistan, their only deaths were accidental. Until now.