Newsmakers of the day: William and Kate in the Big Apple

New York City is in adoration overdrive. And the royals just arrived. 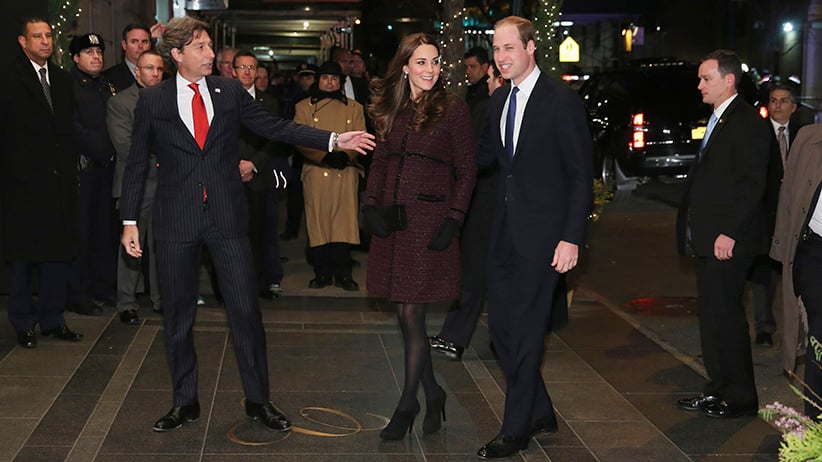 Newsmakers of the day: The Duke and Duchess of Cambridge

There’s celeb royalty, and then there is real royalty. And New York is getting a very quick reminder of why the real deal always trumps Hollywood. The Kardashians may be pursued by tabloids, but they don’t face anything like the white-hot spotlight permanently focused on Prince William and his wife, Kate. The royal couple was met by a blinding barrage of flashes on their arrival at the Carlyle Hotel in New York, their stateside base for a quick three-day visit. They spent all of three seconds—perhaps six—travelling from car to door, with a moment for photographers to get a shot. Yet the networks went live with blanket coverage that focused on the closed door of the hotel. It was almost a flashback to the “Great Kate Wait” of 2013, when the media camped outside St. Mary’s Hospital, waiting for Prince George to be born. Beside filling airtime with banter—Is George coming? Nope, he’s with Kate’s parents. Will she wander down to Soho for a bit of shopping? Extremely unlikely, given the crushing schedule.

Until Monday and Tuesday’s back-to-back events, just about the only fun was betting on the colour of Kate’s coat. Most plumped for blue (I went wild, and thought grey). We lost. It turns out she wore a maroon bespoke coat “featuring a bouclé textured print and high scoop neckline,” said its design firm, Séraphine.” Then it was a quick change for a private dinner to thank the financiers who have contributed to their private foundation. This time, I should have bet big, because she keeps wearing the same basic outfit: a black lace dress. Think I’m exaggerating? I spent five minutes on What Kate Wore and found these: Nov. 13, Oct. 23. Also these from earlier, including the War Horse premiere (also seen here). She’s got enough black lace for a dedicated closet. It’s obviously a look she likes: She was modelling a tiny black lace number in 2002, when Prince William first noticed her. The rest, obviously is history.

There are plenty of events in the next two days. One hopes she has exhausted her black-lace enthusiasm.

Kensington Palace has released information about the Duke and Duchess of Cambridge’s programme ahead of their visit to the U.S.:

Sunday, Dec. 7
The Duke and Duchess of Cambridge arrive in New York

Monday, Dec. 8
World Bank, Washington: The Duke of Cambridge will attend the International Corruption Hunters Alliance conference, followed by a working lunch. The Duke will be accompanied by Mr. William Hague. The Duke will give a speech at the conference focusing on corruption surrounding the illegal wildlife trade.

Northside Center for Child Development, Harlem: The Duchess of Cambridge, accompanied by the First Lady of New York City, will visit the centre, which fosters the healthy development of children and families by providing high-quality mental health and educational services. The Duchess and First Lady will take part in gift-wrapping with volunteers and will meet students undertaking a craft-making exercise.

Lunch at British Consul General’s Residence, New York: The Duchess of Cambridge will meet members of the British Community in New York from the culture, arts, hospitality and business sectors.

Conservation Reception at British Consul General’s Residence, New York: The Duke of Cambridge, accompanied by Secretary Clinton and Chelsea Clinton, will attend a reception co-hosted by the Royal Foundation and the Clinton Foundation, in recognition of the conservation work carried out by Tusk and United for Wildlife partners: Wildlife Conservation Society; Conservation International; and The Nature Conservancy.

NBA Basketball game (Brooklyn Nets vs. Cleveland Cavaliers), Brooklyn: The Duke and Duchess of Cambridge will attend an NBA Basketball game to support the ongoing collaboration between the Royal Foundation, United for Wildlife and the NBA.

The Door/CityKids, New York: The Duke and Duchess of Cambridge will visit The Door to see the work they carry out in partnership with the CityKids Foundation. Both organisations offer services to young people to help them reach their potential. Their Royal Highnesses will tour the youth organization and view arts performances by the young people.

Creativity is GREAT Reception, hosted by NeueHouse, New York: The Duke and Duchess of Cambridge will attend a reception at NeueHouse celebrating the wealth of British Talent in the Creative Industries based in New York.

Innovation is GREAT Reception, hosted by Shutterstock at The Empire State Building, New York: The Duke of Cambridge, accompanied by The Mayor of New York City, will visit the observation deck at the 86th floor, attend the technology-themed reception; and present the winners of the GREAT Tech Awards with trophies.

St. Andrews 600th Anniversary Dinner at the Metropolitan Museum of Art, New York: The Duke and Duchess of Cambridge will join this event, which will support scholarships and bursaries for students from under-privileged communities, new student sports facilities in St Andrews, investment in the university’s medical and science faculties and a lectureship in American Literature at St. Andrews.