Perhaps the coronavirus is showing us that in the 21st century, cash is no longer king 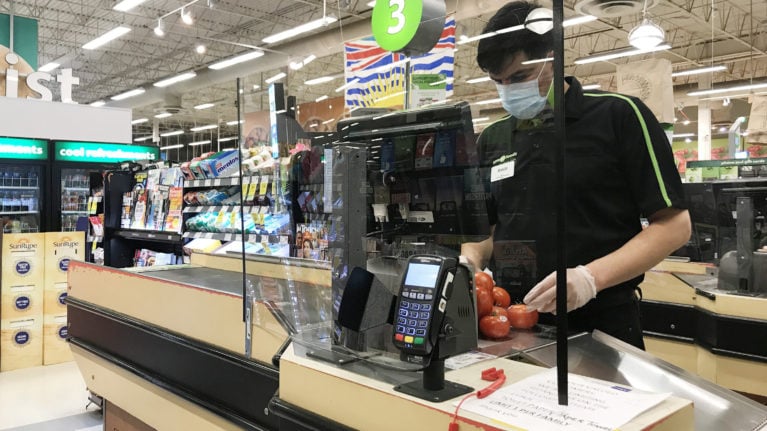 A plexiglass barrier is pictured creating a barrier to protect a cashier at a grocery store in North Vancouver, B.C. Sunday, March 22, 2020. (Jonathan Hayward/CP)

The counter at Yomna Albanna’s Les Moulins Lafayette has the now familiar trappings of retailing in the age of COVID-19. The west-end Toronto bakery and café has a plexiglass screen next to the cash register, with a bottle of sanitizer and the electronic payment card reader nearby. The tableau is completed with a hand-lettered sign: “Debit and credit card only.”

Albanna isn’t dogmatic about the implied no-cash policy: her older customers prefer bills and coins. “Not everybody has a debit and credit,” she says, “so I don’t make a big deal about it.” Many others, however, now use only plastic, even for a $2.95 cup of joe. The reason isn’t hard to fathom: “They don’t want to deal with the money.”

This story is playing out in a growing number of retail establishments. Card readers are displayed prominently, and in some venues, wiped down with disinfectant. Better still, many are now contactless, meaning consumers can pay without touching anything at all.

Data from payment organizations confirms the pandemic has accelerated Canadians growing disinclination to use cash. According to Interac, the number of debit contactless tap card transactions jumped four per cent since the beginning of the COVID–19 crisis, and the average amount spent rose 17 per cent. The volume of first-time Interac e-transfer payments since the end of March has soared, with a 62 per cent spike compared to the same period last year.

The rush away from notes and coins has been so pronounced that even the Bank of Canada, which is responsible for the $92 billion in legal tender in circulation, weighed in this month, cautioning retailers not to stop accepting cash: “Refusing cash purchases outright will put an undue burden on those who depend on cash and have limited payment options,” the Bank said in a statement to the CBC.

Still, one can wonder why Canada shouldn’t follow countries like Sweden and move towards the goal of becoming all or mostly cashless. Sweden saw the phase-out of cash (it’s not completely gone) as part of a broader policy to digitize its economy. The Scandinavian country also sought to surface parts of its underground cash economy by creating new tax credits for some cash-based services, like babysitting. With the Canadian government moving to toughen up its anti-money-laundering laws, it seems to make sense to roll back the amount of currency in circulation.

Canada isn’t so far behind Sweden, where cash accounts for 13 per cent of transactions. Only 15 percent of Swedes use cash, as NPR reported last year. The Bank of Canada reports that the value of all Canadian point-of-sale cash transactions plunged 54 per cent since 2009. A 2019 Bank of Canada methods-of-payment research study found that nine per cent of Canadians no longer use cash money.

The Canadian Payments Association, whose members are advocating for the modernization of our payments system, has also documented the “sharp decline” of cash in favour of ordinary or contactless bank cards, e-transfers, smartphone-based systems like Apple or Google Pay and pre-paid cards. Even Chinese payment technologies like Ali Pay and WeChat Pay are widely in use in Canada.

Perhaps the pandemic is showing us that in the 21st century, cash is no longer king. Quite the contrary. After all, if a bill was last handled by an infected person, it’s possibly toxic, ergo all those no-cash signs.

But as consumers become accustomed to using tap cards, many in the post-COVID-19 world may realize that notes and coins have become as archaic as the paper tickets or tokens that transit agencies the world over have replaced in favour of electronic fare cards. Think about the other benefits. Cheques go the way of the dodo. Counterfeiting, bank heists and convenience store robberies become increasingly rare. Fewer outrageous ATM fees draining your bank account. It sounds appealing.

MORE: Taxpayer bailouts for big corporations should be a last resort

Indeed, this cashless pandemic, says Walid Hejazi, a professor of economic analysis and policy at the University of Toronto’s Rotman School of Management, “is a call to action for policymakers towards a lower reliance on cash. Everyone should have the ability to make payments using touchless technology.”

Even for the defiantly cash-phobic or cash-agnostic, it’s not difficult to think about transactions that would be difficult or impossible to manage without lucre: a $20 bill for the kid who shovels the sidewalk; the swear jar; that under-the-table repair job on the toilet in the basement.

Then, of course, there’s whatever people give to homeless individuals. Toronto street nurse Cathy Crowe says that almost as soon as the pandemic’s emergency measures came into effect, homeless people noticed that pedestrians were no longer carrying cash. Donations of gift cards soared, she says. But “you learn how much people who are poor and homeless are buying stuff in stores,” Crowe adds.

The Bank of Canada’s official view is that notes and coins are inexpensive (no transaction fees), easy to use, provide privacy and security, and are always viable in emergencies (e.g., a massive blackout). It also notes that while 99 per cent of Canadians, including the very poor, have bank accounts, many are “under-banked,” (bank fees are so high they tend not to use plastic).

Hejazi, who is also the director of Rotman’s Business of Payments program, says that policymakers aren’t pushing for a more cashless society out of a concern for the very poor. “There will always be some demand for cash.” Rather, the less obvious subtext involves the giant and viciously competitive market for payment forms.

Most consumers don’t spend too much time thinking about the industry of paying. Instead, they think about paying, and have their preferred formats: Paypal, plastic or Apple Pay, or whatever. But suffice to say that the various players—Interac, the credit card giants, etc.—are all vying for billions in fees and jockey with one another to become the mode of choice for consumers.

What’s also less well acknowledged is that the Bank of Canada is not a disinterested bystander; it, too, has skin in the payments game. Through an ancient concept known as “seigniorage,” central banks earn interest on the bank notes they put into circulation. So much that the revenues covers the Bank of Canada’s $533 million operating costs, with plenty left over (it all goes back into government coffers). The question is, if all the entities in the payments world are profiting, including the national agency that prints money, which system is best for Canadians in terms of ease of use and security?

While a spokesperson noted in response to my questions that seigniorage provides the lion’s share of the Bank of Canada’s income and guarantees its independence, the institution’s financial reliance on seigniorage tends not to show up in policy papers on the importance of bank notes. Rather, as a February 2020, Bank study points out, the decision to phase out cash in favour of a digital currency will only happen if we reach some kind of “tipping point,” with a growing consensus among consumers and businesses that cash will be either discouraged or not accepted.

Sweden has hit that tipping point, and Hejazi says that countries like Belgium and China are not far behind. Canada still officially likes paper money, as well as cheques, the commercial utility of which have also been called into question at a time when people can’t go into the office to sign, mail or collect them.

The looming question, however, is whether the pandemic has prompted enough consumers to swear off coins and notes to force policymakers to respond. Back at Yomna Albanna’s café, she wonders if her customers will revert back to cash once public health authorities have sounded the viral all-clear.

Last year, the Bank of Canada published a breezy post on its blog about why the reports of the death of cash were, as the old saying goes, greatly exaggerated: “It’s the preferred payment option for small-value purchases like a cup of coffee or a muffin. In fact, the lower the value, the more likely it is the buyer will choose cash.” As the past six weeks have proven, Albanna’s customers might beg to differ.