For some living south of the border, the ability to be shocked by gun violence feels like a distinctly Canadian attribute 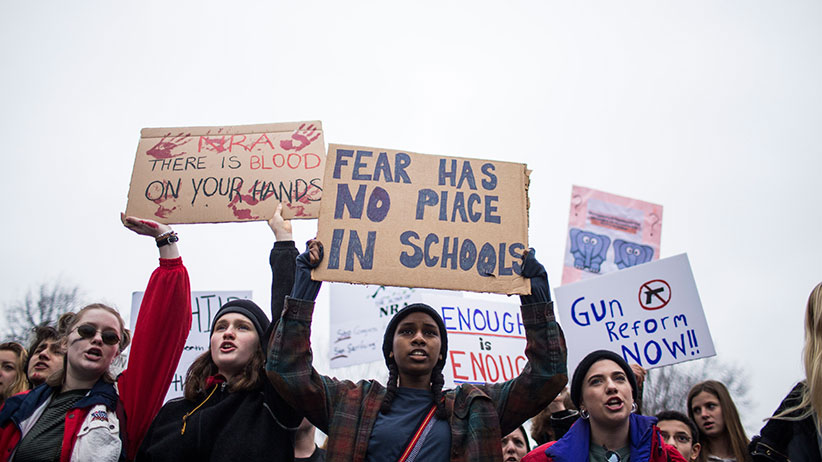 Demonstrators hold signs during a “lie-in” demonstration supporting gun control reform near the White House on February 19, 2018 in Washington, DC. According to a statement from the White House, “the President is supportive of efforts to improve the Federal background check system.”, in the wake of last weeks shooting at a high school in Parkland, Florida. (Photo by Zach Gibson/Getty Images)

When Ron Piovesan moved from Toronto to the United States for work in 2001 he never considered the country’s gun culture as a reason to stay home.

It was only after he had kids that the relentless headlines about gun violence — like the recent school shooting in Parkland, Fla., that left 17 students dead and this week’s incident at YouTube’s headquarters in San Bruno, Calif. — really started to weigh on him.

“These things add up, and I don’t know what the tipping point is, but you get to a point where you think, ‘I don’t want my kids to be scared anymore,'” says the father of two, choking up as he describes how his children have experienced frightening lockdown drills at their elementary school.

“It hits you in a much deeper place and a much more profound place when you have kids who are actually in school — and then that problem becomes a lot more real to you.”

Still, the 46-year-old tech executive isn’t planning to uproot his family and return to Canada.

READ: How to be a sensible parent in gun-crazed America

“For the moment, I’m choosing to stay and try to make a difference in my community,” says Piovesan, who led a successful campaign last year to stop a gun store from opening in San Carlos, Calif., where he lives.

It’s a sentiment shared by attorney Dawn Robertson, who moved with her family to San Francisco just over four years ago when her husband Mike Beltzner was hired to work for Pinterest and more recently Facebook.

They have not considered moving back to where they previously lived in Toronto, but have become increasingly distressed by the prevalence of shootings in the U.S.

“It’s one of those things that even when it happens you still feel like it can’t happen to you,” says Robertson, 41. “But I think certainly since Parkland and most recently with YouTube being close to us, we’re increasingly concerned — as people who can’t vote here — that we’ve got a major public safety issue living here that is suddenly certainly a concern for us and for our children.

“It does weigh quite heavily on us. It’s not enough to make us turn around and move but certainly it’s something that does give us pause.”

Zoe Kevork, an immigration lawyer and co-president of the Southern California chapter of Canadians Abroad, says gun culture is something that’s frequently overlooked when Canadians consider a move south.

“People do think of us as being so similar … we’re right across the border, we watch all the same television, we have so many things in common culturally,” says Kevork.

“But you really start to realize there are some significant cultural differences which you probably didn’t expect when you made the move down here.”

READ: How American kids brought the gun reform fight to the streets of Washington

Kevork, who has lived in the U.S. for 14 years, says she’s still shocked when a mass shooting makes the news, but finds Americans are no longer as shaken as they once were.

“I’m happy I still get shocked by it because they’re so acclimatized to it here, it’s just a part of life. The ability to be shocked I think is what makes us Canadian right now,” she says.

Piovesan says he wouldn’t be surprised if some of the Canadians taking advantage of the great opportunities in Silicon Valley and elsewhere in the U.S., do start to reconsider their options at home.

“I do think where a lot of people thought, ‘Oh I’m never going to move back,’ I do think as things appear to get progressively worse in the United States there will be a tipping point for many people where people think it’s not worth it anymore.”