He was ‘just one of those guys looking for adventure,’ and a best friend to everyone—especially his son

William Bradley Kuhl was born on July 12, 1967, in Lethbridge, Alta. His parents called him their “centennial project.” He came 16 years after his brother George and 17 years after his sister Cindy. He grew up in a small, white bungalow close to Highway 4 in Milk River. A precocious child with a love of nature, Brad would spend time outside staring at insects and carting around garter snakes. 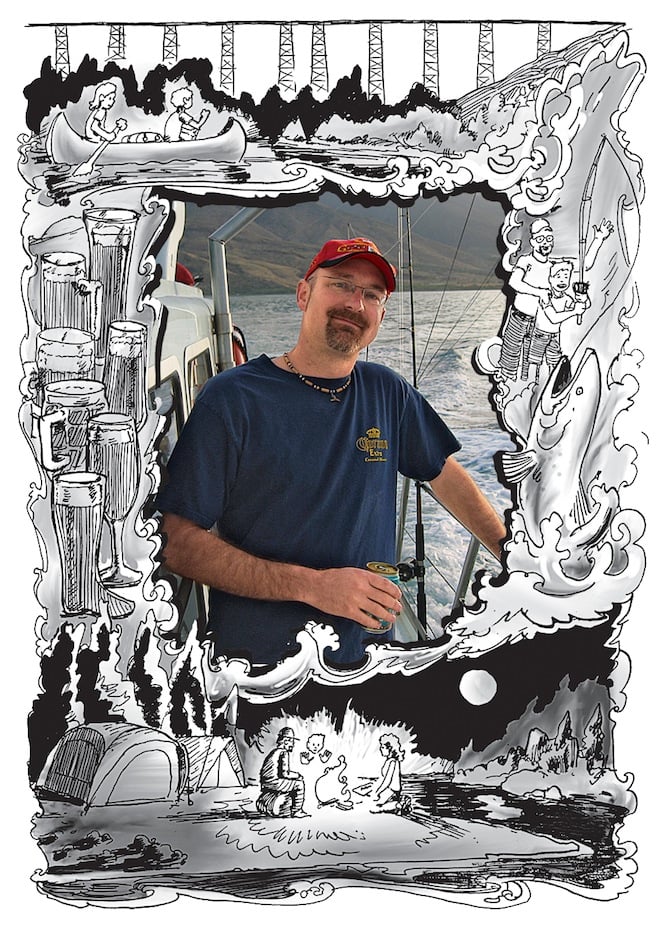 His parents, Ken and Lee, separated when Brad was 10, and he moved to Lethbridge with his mom. Sometimes she would call him “Willy B. Kuhl”—it drove him nuts. Brad loved the outdoors. “He was just one of those guys looking for adventure,” says Rob St. Onge, a close friend. At 14, the two would get dropped off with a canoe and camp gear in Fort MacLeod, 50 km west of Lethbridge, and paddle home along the Oldman River.

Brad, who had early dreams of becoming a pilot, collected model airplanes that friends weren’t allowed to touch. But he also loved cars and trucks. Growing up, he would sit on the side of the road getting semi-trailer trucks to honk. Brad got his first real car in high school: a ’74 saddle bronze Super Beetle. He quickly upgraded to a plum-purple Firebird dubbed the “Firechicken.” “He was kind of hell on wheels in that for a while,” says George. The cars went well with his ’80s rocker mullet.

Brad studied geography at the University of Lethbridge. After graduating, he was offered an urban planning job in Medicine Hat, but the company faced a budget crunch and let him go before his first day. Brad just rolled with it—nothing really fazed him. He moved to Calgary, where he got a job as a delivery driver and learned the city inside out. At 27, he cut his long hair for something more professional, but kept things fresh with frequent changes to his facial hair.

He found work digitizing utility maps with QC Data, a data maintenance company. On April 24, 1995, a new employee named Michelle Istvan showed up for her first day of work. She was a quality assurance specialist, meaning she would look for Brad’s mistakes. They quickly became the office pranksters—wrapping their co-workers’ staplers and phones in Christmas paper or tape. Brad was more social than Michelle. “He could talk to anybody about anything,” Michelle says. “And he made you feel like you were the most important person in the room.” Eventually, their friendship blossomed into something more. QC Data chose to put them on separate shifts; Brad didn’t like that he had to drive across town to see her, so six months into their relationship, he moved into a tiny apartment with Michelle. Their stuff could hardly fit up the stairwell.

Instead of splurging on a wedding, the couple bought a bungalow in Calgary’s northwest in 1999. Three years later, they had a son, Connor Wolfgang Kuhl. Brad liked to call him “Wolfy” or “the boy.” He and his son loved going to car shows, camping or just exploring local construction sites. Brad still loved to paddle, and often took the family rafting on the Milk River. Brad was especially proud the day Connor caught his first fish, a rainbow trout.

In 2008, the family bought their dream home. Brad plastered Connor’s bedroom wall with licence plates from his old vehicles. A new home and young family didn’t distance Brad from his friends. Every summer, there was a boys’ paddling weekend—rafting, fishing and relaxing.

Brad loved to travel. Once, on a trip to Paris for a wedding, Brad wrote a book for Connor, who’d had to stay behind, illustrated with drawings of trains and the Eiffel Tower, to show Connor the adventures the two would take together one day.

From his extensive travels, Brad developed a palate for foreign—mostly German—beer. On his 40th birthday, friends were asked to bring Brad a beer he had never tried before. Most failed, but it didn’t matter. Brad was just happy to be with his friends. “I felt like I was his best friend,” says Errol Dubuc, “but if you talked to anyone else, they would have felt the same thing, too.”

On July 2, 2012, Brad went whitewater rafting with three friends on Calgary’s Bow River. As the four went through the Harvie Passage, a dangerous, fast-moving section of the river, the raft flipped. When Brad emerged from the water, he could not see the third rafter, so he went back out to look for him. Hypothermia set in, and Brad drowned. His friend eventually made it to shore 300 m downstream. Brad was 44.