With one small patch, history is made on NBA All-Star weekend

It’s no wonder the average NBA team is worth more than a billion dollars when the only thing not sponsored on All-Star weekend appears to be the city of Toronto itself. Saturday night’s events included the Taco Bell Skills Challenge, the Foot Locker Three-Point contest and the Verizon Slam Dunk contest—branded, all.

But it is the relatively small patch of advertising Kia affixed to the left shoulder of the All-Star players’ jerseys that could drive the biggest change for sports advertising in North American leagues in the future.

Kia’s partnership with NBA All-Star weekend invaded new territory long ago—it was 2011, after all, when NBA star Blake Griffin jumped over a Kia Optima en route to win the Dunk Contest. This weekend, however, the auto manufacturer will make history by becoming the first sponsor with an on-jersey advertisement with one of the four major North American sports leagues. Experts say this could mean jersey sponsorship trickling into regular season NBA games, pro football, baseball, and even the NHL.

“It’s not a matter of if, it’s a matter of when we’re going to see [corporate] logos on jerseys in North American sports,” says Cheri Bradish, chair in sports marketing at Ryerson University’s Ted Rogers School of Management. “From a strategic marketing perspective, it drives incredible brand loyalty. It’s the first point of reference that will become noticed from a corporate investment between a consumer and a brand.” 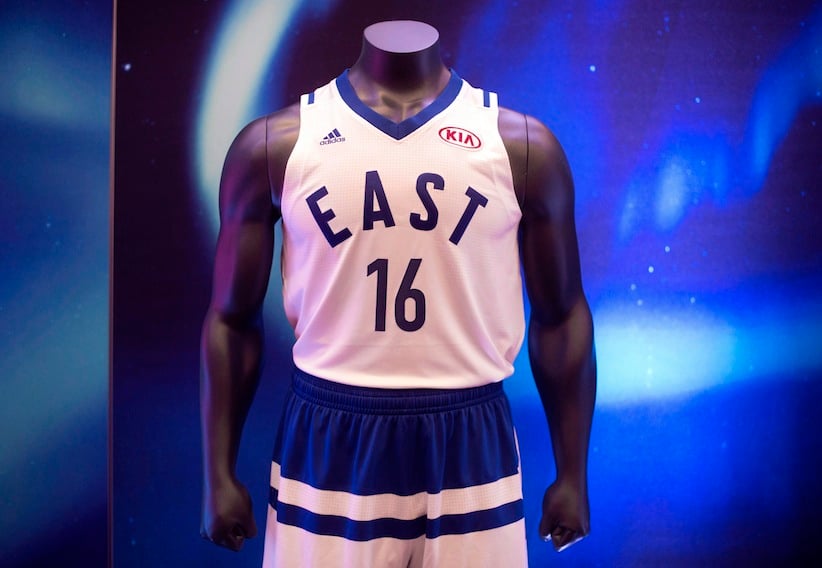 The uniforms for the 2015-2016 NBA All-Star Eastern team are unveiled in Toronto on Wednesday, December 2, 2015. THE CANADIAN PRESS/Darren Calabrese

It also represents huge profit potential for the leagues. Though the terms of Kia’s deal for the All-Star jersey sponsorship weren’t disclosed, NBA commissioner Adam Silver suggested five years ago that on-jersey advertising for the league could easily reap an extra $100 million for NBA owners per year. Kia’s current arrangement could simply help the league warm their fans up to the idea. Advertising has been on practice jerseys for years, plus NBA team owners will meet in Toronto this Sunday, where one topic reportedly up for discussion will be putting corporate logos on game jerseys.

It sounds like a simple stamp of approval—who wouldn’t want a few extra million dollars?—but branding and business expert Tony Chapman says pulling it off would require untangling a web of legal issues. “You might have a sports team that sells Adidas, and then the league wants to do an overall deal with Puma,” he offers as a hypothetical example. And the folks at Coca-Cola would be none too pleased to see a Pepsi logo across LeBron James’s team jersey when Coke is paying James millions. 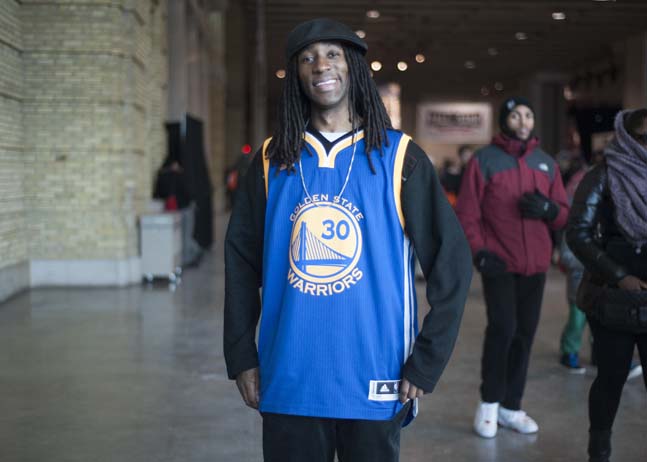 Then there’s the question of whether accepting millions in advertising is what’s best for the league’s brand. As a sports fan, Chapman says he prefers an uncluttered jersey—and he’s not alone. After watching an NBA All-Stars practice, Montreal native Karim Youssef said he appreciates the old-school players and jerseys—like the Larry Bird Boston Celtics jersey on his back—but the new All-Star uniforms don’t appeal to him. “Honestly, I don’t like it that much because of the Kia sponsorship on it,” he says. “I prefer to keep jerseys clean—NBA only.”

Merchandising is such a huge business for sports teams that few would want to give fans any reason not to make that purchase. But if it were someone’s favourite team, would a jersey ad really stop them? Companies pay millions to have their logos emblazoned across jerseys of Real Madrid or Manchester United. And one would be hard-pressed to say that a fan of soccer star Cristiano Ronaldo isn’t going to buy his new jersey because there’s an airline company advertising on the front.

That wasn’t always the case. In 1974, the English club Kettering Town came onto the pitch with their sponsor, Kettering Tyres, written across their chests. Many critics demanded the logo be removed and TV networks went a step further by not showcasing teams wearing corporate logos, but that pushback only lasted until 1983. Teams weren’t about to give up on the extra cash, and the critics had to accept the sport’s new reality. So when Major League Soccer added teams in Montreal, Vancouver and Toronto, BMO and Bell logos were included on the front of jerseys without a fuss. The CFL also recently started on-jersey advertising, without much pushback. Now the NBA is giving it a test drive.

“Will fans notice? I bet you at the end of the game not too many people will remember there was a logo or a car company on [the all-star jersey],” says Chapman. “But over time, if you were to see that constantly, you would start associating that league with that brand.”

Besides the potential fan pushback, Chapman says there is an economic argument for sports leagues—at least those that aren’t desperate for cash—to keep the jerseys clean of any advertising. “It’s the NBA logo that should be dominant on their jersey because it adds so much value in so many different levels for the owners in terms of long-term benefit,” he says. “That value of the brand transcends itself not only to memorabilia, which is hugely profitable, but also the value of TV contracts and the value of your overall franchise.”

Then there’s the slippery slope of accepting even more jersey sponsors. Once one corporate logo appears on the front, why not try two?

In Europe, hockey jerseys are covered in ads, so much so that when Toronto Maple Leafs legend Doug Gilmour played in the Swiss league during the NHL lockout, he was reportedly asked to step off the ice to adjust his uniform to make sure a brand logo was prominent enough—on the socks.

North American sports jerseys may be the last bastion of non-commercialization. But no more: this weekend, Kia gains a big toehold. One that measures 3.25-by-1.6 inches.