Canada's queen of the slopes 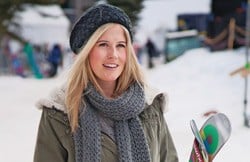 Sarah Burke died on January 19 of the injuries she suffered in a training accident. Below is the profile of Burke Maclean’s published last spring.

Sarah Burke is among the planet’s best skiers. She has chops enough to also have been named one of the most influential of the past 35 years by Powder magazine—and sex appeal enough to have made Teen Vogue and the men’s magazine FHM, where she appeared au naturel, with just a pair of crossed skis for cover. But in Canada, the Midland, Ont., native is an unknown. Burke, dubbed the “female Shaun White” after the snowboarding god, was nowhere to be seen at the Olympics. Her sport, halfpipe skiing, is a bit much for the International Olympic Committee—she hits the pipe the same way snowboarders do, spinning and flipping above its 22-foot walls, but on skis—and for much of her career, the 28-year-old has not only been shut out of the Olympics, she’s had few women’s events to compete in at all.

In Aspen, Colo., late last month, however, she was in her element. There was huge buzz about Canada’s queen of the slopes at the Winter X Games, the one weekend a year the posh resort town gets mobbed by gravity junkies and party-hearty snowboarders—the kind of people who think nothing of jumping 300-foot gaps on snowmobiles, or triple-flipping face-first off the lip of an icy halfpipe. This is where the sport’s counterculture gets the major league treatment, and its heroes their 15 minutes of fame. “It’s the biggest event of the year,” says Burke. “The most people and energy and the biggest party.”

In 15 years, the X Games, the brainchild of an ESPN exec looking to create an outlet for skateboarding and snowboarding, has become the world’s pre-eminent action-sports festival. Like the Olympics, it boasts summer and winter versions, and stirs up its share of nationalist tub-thumping, Aussie face paint and inflatable Boxing Roos. These alternative games, however, target a younger, faster crowd—the Olympics, but with a hip-hop soundtrack and jaw-dropping aerial moves.

And the crowds do come. A record 115,000 people packed the base of Buttermilk Mountain to catch the 2011 event live, up 40 per cent over last year, and 40 million Americans tuned in on TV. On the Saturday, more than 30,000 fans, most young, some copping the thug styles of freestyle skiers—long, baggy jackets and matching elephantine pants, or the bright bandanas worn train-robber style by snowboarders—began lining up five hours ahead of the superpipe final to catch Shaun White’s post-Vancouver return to competition. Many were close enough to high-five competitors as they skied out through the base corral—a relief, to athletes, from buttoned-down World Cup events held in remote European ski towns. “I remember hitting a wall,” said 17-year-old U.S. freeskier Devin Logan, who was competing in her first Games. “I could just hear all the fans on one side, screaming and cheering for me. It was the craziest feeling—I’ve never felt that before.” 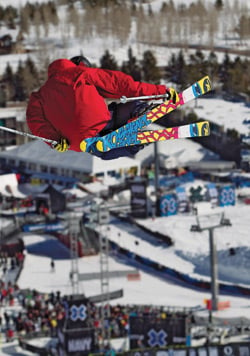 On the other side of the mountain, where 450-lb. snowmobiles arced gracefully across Aspen’s bluebird skies, the air grew thick with the sweet smell of super-oxygenated racing fuel as, one by one, snowmobilers tore up steep, icy ramps, caught 100 feet of air, then twisted and somersaulted as their sleds flipped beneath them. “It’s the Super Bowl of snowmobiling,” says Paul Thacker, an Alaskan rider who broke his back training for these games, and has yet to regain feeling from the waist down. “They’re pulling tricks no one has ever seen or done before.”

Snowmobiling is widely seen as the Games’ hottest event, perhaps partly because of the risk factor. “The mindset of the Moto dudes is just different,” says ESPN host Sal Masekela. “Every other sport has an exit strategy. In Moto X, there’s no exit strategy except the hospital.” Fans, many dressed in ankle-length pit coats, Arctic Cat toques and Carhartt overalls, made the pilgrimage from Nunavut and Florida to catch the world’s best sledders. None is more famous than Tucker Hibbert, the Gretzky of the snowmobile circuit. After winning his fifth consecutive gold in snocross—riders race side by side on a tight course with obstacles and steep jumps—he grabbed the mike to “thank the good Lord Jesus Christ—I love you so much.” Hibbert, an Idahoan raised on a potato farm, and his wife, Mandi, also his manager, were paraded out, like king and queen of the mountain, in a slow 20-man snowmobile procession. 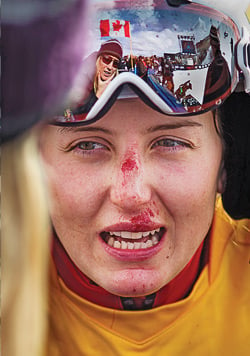 Ten years ago, the X Games looked nothing like this. “There were no tents, no towers,” chuckles X fan Taylor Frank. “We’d go down to the Aspen Inn and drink keg beer on the patio.” These days, the multi-billion-dollar franchise boasts some of the most saleable names in sports. Shaun White, the second-most powerful man in sports according to Bloomberg Businessweek—ahead of Tiger Woods and LeBron James—launched his appearance at X by announcing a multi-year deal with BFGoodrich Tires. Aussie snowboarder Torah Bright announced the biggest-ever sponsorship deal for women in action sports, with Roxy. None of this is lost on the athletes. “It’s the best event of the year,” says Canada’s Kevin Hill, who won silver in boarder­cross. The sport, in which six riders race side by side, dodging and darting around each other and gates in the full-throttle race for the bottom, is known as “NASCAR on ice,” and boasts snowboarding’s highest injury rate. “The crowd’s huge, the exposure’s huge, the courses are better—I love it,” concurs his teammate, Chris Del Bosco, a Vail, Colo.-raised dual citizen recruited to Canada’s fledgling ski cross program three years ago. “These Games,” says Del Bosco, who went one, one, two and one in his last four international races, “are just as important as the Olympics.”

For Sarah Burke they certainly are. The 28-year-old was born into a family of skiers, and started skiing at Barrie’s Horseshoe Valley Resort as soon as she could walk. At 16, two years after making her competitive start on moguls, she made the move to freeskiing—”snowboarding on skis,” as she explains it, with the same fashions and sensibility—and picked up her first sponsor, Salomon, the ski gear behemoth. Within two years, she’d mastered both superpipe and slopestyle (skiers rack up points going down a course filled with rails and kickers), then in 2007 become the first woman to land a 1,080-degree spin—yes, three full rotations. “Ever since I was a kid,” says Burke, “I just thrived off someone saying, ‘No, you can’t.’ Doubt sets this fire inside me, and makes me want to prove everyone wrong.”

When Burke began competing, she was matching the double corks and jumps the boys were throwing, but she was often barred from competing against them. Sometimes, she’d be promised the chance to forerun—to ski the course ahead of the competition—only to be yanked at the last minute. “I’d be heartbroken,” she says. “I remember making phone call after phone call to my dad.” She kept pushing, swamping event organizers with emails and phone calls—she was “really annoying,” she’ll admit—and eventually, organizers began adding women’s contests to the circuit, including Winter X, in 2005, and offering equal prize winnings. In Aspen, that’s $25,000 for gold. Within a few years, Burke had become the face of freeskiing. Her sponsors grew to include Whistler Blackcomb, Roxy, which carries a signature Sarah Burke purple ski jacket designed by her, Monster Energy, the drink (the loudest presence on the hill), and Smith Optics, the goggle manufacturer.

Now she may get her chance on the Olympic circuit after all. The path from Winter X to Olympic glory is by now well-trodden. The so-called “X-ification” of the Olympics began in the ’90s with freestyle skiing and snowboarding. Vancouver’s success with snowboard halfpipe and ski cross in 2010 silenced any lingering naysayers. X, clearly, marks the future of the Games. In a mind-bending bit of Olympic fast-tracking, the very unextreme IOC appears poised to add three more X mainstays—ski and snowboard slopestyle, and ski halfpipe—in time for the Sochi Games in Russia. The final decision will be announced in April by IOC president Jacques Rogge; odds they’re in are “extremely high,” according to IOC sports director Christophe Dubi. There is already a preliminary go-ahead.

This is fantastic news for Canada. Already, Canadian athletes have owned this other, alternative podium. Burke, for starters, has won every major pipe and park competition in the world. And she wasn’t the only Canuck to light up the slopes in Aspen. Montrealer Kaya Turski, who graces the cover of this month’s Skier magazine, won her second straight Winter X gold in slopestyle skiing. Kelowna, B.C.’s Kelsey Serwa grabbed gold with one of the most spectacular finish-line crashes in the competition’s 15-year history, hurtling 150 feet on the final fly-away to maintain her first-place position. And Canadian teen sensation Sebastien Toutant and his best friend, Mark McMorris, went one and two in snowboard slopestyle. Shaun White, who used to own the event, didn’t even make it past the qualifiers, ceding the platform to the Canadian kids, the sport’s next greats. Eighteen-year-old “Seb Toots,” as he’s known in the snowboard world, also pocketed a silver in Big Air, one of the weekend’s most anticipated events, and was named Winter X Athlete of the Games in his debut. (An old crowd this is not. J.J. Thomas, the “old man of the pipe,” is all of 29. Boarders of his seniority were dubbed “OGs”—”original gangsters.”)

Drama and spectacle are offered up in spades. In one memorable, and reckless, moment, Colton and Caleb Moore, brothers from Texas, hopped on a single snowmobile during the best trick competition and performed the world’s first two-man backflip (judges disqualified them, ruling it an individual sport). As Serwa, who sported bloodied lips, a raspberry on her chin, and a sprained knee and wrist, made painfully, thrillingly clear, the world’s top action-sports athletes lack a few basic human emotions, fear chief among them: “I figured if I flew off the booter, I’d still cross the line first,” she said, having been lifted up from the snow, white as a sheet. “I knew the girls were right behind me.”

As at the Olympics, there is no shortage of poignant moments. One of the weekend’s loudest ovations went not to Shaun White, who took his fourth superpipe gold, but to fellow American Kevin Pearce. Pearce, once White’s nearest competitor, sustained a traumatic brain injury just weeks ahead of the Vancouver Olympics. His competitive days have all but finished—the 23-year-old has had to relearn to walk and talk—but the beloved rider made an emotional return to Aspen to cheer on his pals in the pipe. Their warm embrace left his parents in tears.

“It’s a mental game,” Burke admits. “And I’ve got a really bad imagination.” Two years ago, Burke broke her back on her final trick at Winter X. Her last season was a mess. Not only was her back shot, her shoulder kept dislocating and, for the first time, she missed the podium at Winter X, placing sixth. But in July, she underwent surgery on her shoulder, and spent most of the season recuperating. In fact, she was on skis just nine days this season, including the competition day, before grabbing the gold—her proudest moment yet. “It was such a struggle to get back to where I was,” she says. There’s only one medal, in fact, that could outdo it, she says. And an Olympic medal is the only one she’s never won. Sochi is in her sights, she says. “It’s definitely where I’m looking to go.”