Time was, the drink seemed decadent all on its own. A West Coast festival has changed that. 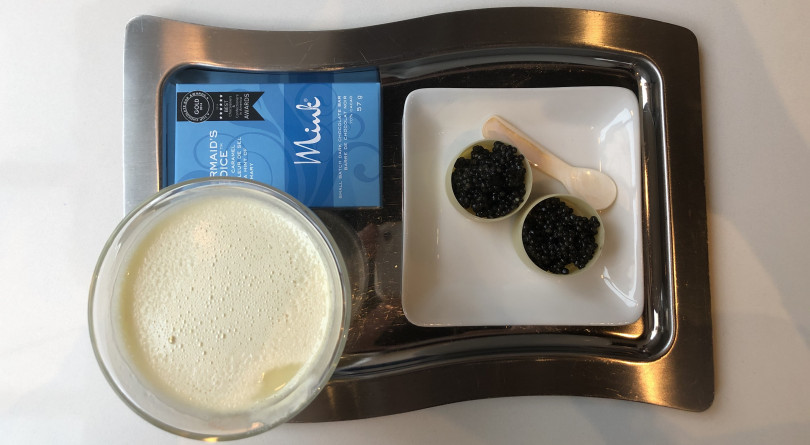 Sturgeon live in the water. So do mermaids. Daryl Hannah once played a mermaid. She’s also married to Neil Young, who is Canadian. So it’s full circle, really, as Marc Lieberman explains it, for a hot chocolate called “The Legend of Daryl Hannah,” featuring a “Mermaid’s Choice” chocolate bar and paired with sturgeon roe, to be served at a chocolate café in Vancouver.

You can count on one hand the people who have ordered the beverage, says Lieberman, who owns Mink Chocolates. That’s because it costs $98. It’s a limited-time offer, part of the 10th annual Vancouver Hot Chocolate Festival. If you prefer to spend less, the same shop offers a hot chocolate garnished with “Canadian-farmed, organic, gluten-free, non-GMO, free-range, whole roasted crickets” instead.

The caviar is a rare product, locally-sourced from the Sunshine Coast. It is salty. Like the sea that mermaids live in. The drinking chocolate is white and silky and sweet. Like … Daryl Hannah? To dig in with the delicate mother-of-pearl spoon is to imagine oneself staring into the middle distance from some Los Angeles penthouse. And to feel deep, deep shame. Who do I think I am? Why is it so delicious? What am I doing?

RELATED: A walk down the Canada Food Guide Memory Lane

Well, this chocolatier knows what he’s doing. He knows some will balk at the price tag. He gleefully invites it. (“I strongly suspect that a politician spending $98 on one hot chocolate would be a career-ending move,” says Aaron Wudrick, from the Canadian Taxpayers Association, when I ask for his opinion.)

Lieberman delights in “getting a rise out of people.” In 2015 his offering was called the “Flu Shot,” an over-size syringe full of ganache and Bailey’s to be consumed then disposed in a sharps container. Someone called the health department on him. He still laughs about that. “How can you take things so seriously?”

The festival’s founder Rhonda May is quick to reassure you that prices at the festival are generally reasonable. “For most people, a hot chocolate is just a small affordable luxury.”

She started it in 2011 with a handful of businesses, including Mink, as a way to cure January blahs. “Christmas is over, the weather’s bad, you might have a cold, you’re out of money,” she says.  The festival donates some of its proceeds to local charities, and gives people something fun to do that’s not too expensive (unless you buy a Daryl Hannah).

Most options in the $6 to $8 range. Still considerably more than the styrofoam cup you get for a toonie at the local arena—or for free during a current promotion for skaters at Robson Square’s outdoor rink—although to some that’ll taste just as good, because it reminds them of childhood and hockey and national identity. “If powdered chocolate from a can is fine for you, fine. Nobody’s saying that’s right or wrong,” May concedes.

Swiss Miss this is not. Exhibit B: Soirette Pastry Boutique’s “tipsy unicorn,” an unctuous vortex of chocolate, strawberry and peach schnapps, is topped with a mountain of whipped cream, from which emerges a bright pink chocolate “horn,” sprinkles and a large fluff of pink cotton candy, presumably the mane. It comes with a sparkly macaron and costs less than a cocktail.

RELATED: Dr. Chocolate teaches marketing and the pleasure of food

It tastes like liquified birthday cake, or puréed Poptart, or the soggy bottom of a berry pie (but in a good way).

The same shop offers a beverage inspired by international saviour and alien-frog-eating bon-vivant Baby Yoda, the nameless green child from Disney’s The Mandalorian. The whipped cream is sage-tinged, the cup wrapped in a piece of cloth, just like his wee garment. 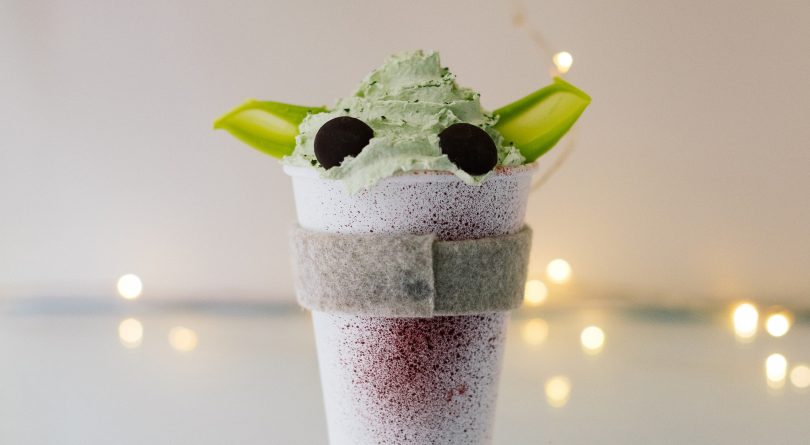 “He’s not the most attractive little guy,” says May—I bite my tongue and allow her to finish, despite strongly disagreeing—“but the children love him. And getting a hot chocolate that looks like a baby Yoda is just a thrill for them.”

Last year, inspired by a Time magazine cover illustration of Donald Trump’s suited body in a pool, with his head just floating above the water, local chocolatier Thomas Haas designed a blond truffle—“fake and hollow,” according to the description—that could be dropped into hot chocolate to melt and disappear. The drink was called “You are Fired.”

There’s something here for everyone. For the adventurous foodies. For the Star Wars fans. For the political statement-makers. For the people—in a city that features ostentatious wealth on one corner and hopeless poverty on the next—whose guilt over caviar is lessened by a built-in charitable donation to Downtown Eastside women.

And for the Instagrammers. Especially for them.