Ice cream 2.0: How technology is creating the perfect scoop

Modern technology has made it easy to concoct delicious, all-natural ice cream at home 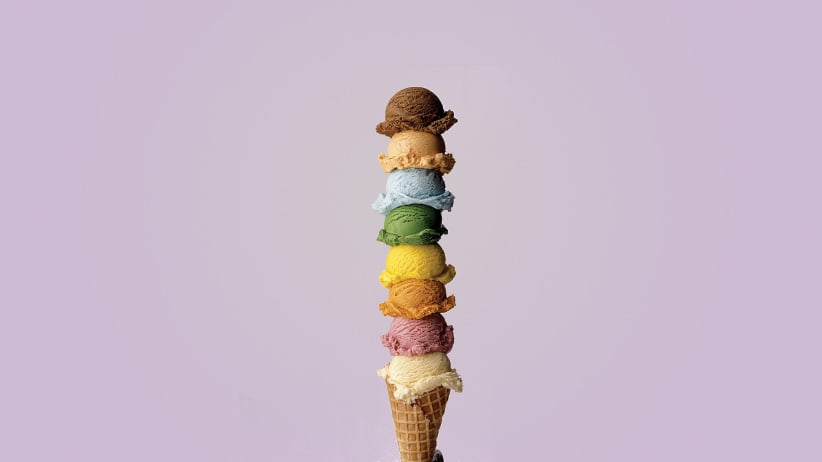 Ice cream is one of those unusually great, powerful culinary ideas that has flourished just about everywhere, developed differently in every market and, regardless, always remained recognizable for what it is. The French like theirs churned swiftly from a custard base built with generous lashings of cream. The Italians use a milkier base, and instead derive their gelato’s richness from a slower churn and a less aerated result. The Japanese favour distinct flavours, sometimes savoury (say, red bean), and occasionally piscine (like squid ink, eel and jellyfish).

And there are others—like children and hipsters—with a collective taste for huge cones of soft serve, dipped in everything but the kitchen sink, best consumed live on Instagram.

All considerably different, but all still ice cream. Except for the soft serve, which—delicious as it might be on a summer night—is unfailingly a chemical-laden and entirely artificial concoction. Every popular ice cream stop in the country buys this industrial base in bulk. In the lineage of ice cream, soft serve is an American aberration.

Genuine ice cream as we know and love it—which is to say, laden with dairy—is also a fairly recent invention. But like so many good things (such as, say, domesticated ducks), it goes back to the ancient Chinese, who were enjoying iced drinks at least a couple of millennia back. The Arabs acquired the trick in trade, mixing sweet, fragrant fruit syrup—or sharbat—with snow when they could. This landed in Europe in the 13th century courtesy of Marco Polo, but it took another 500 years for the slush to acquire its creamy richness, courtesy of eggs, cream and a French chef in the employ of Charles I of England.

The basic formula has persisted, but the method of putting it together has evolved in leaps and bounds, especially recently. At my house I have three ice cream machines, each representative of an era.

The first of them was manufactured by Husqvarna of Sweden about a century ago. It consists of a metal drum attached to a hand crank set over a wooden bucket. Fill the drum with ice cream base, and the bucket with ice, salt the latter to accelerate the cooling of the custard, crank like mad, and eventually the base will turn to slush and, finally, ice cream.

Now, the machine seems a bit like an abacus, a handsome curiosity that actually functions well—as long as you are equipped with the right skill set and commitment. Having neither, I replaced it 15 years ago with an electric model from Cuisinart, which in addition to dispensing with the hand crank did away with the salted ice in favour of a gel-filled sleeve.

At the time, all that seemed like a breakthrough. In optimal conditions the machine worked nicely. But in anything less—like if your custard was not thoroughly chilled, or if the churning tub did not spend the requisite, uninterrupted 48 hours in a very cold freezer—the end product was less ice cream than it was cold, foamy custard. In the development story of the domestic ice cream machine, that Cuisinart was the Commodore 64. But note, if you bought one and it long since fell into disuse, it is time to shop again. For the domestic ice cream machine has now gone iPhone.

For the past few weeks I have been experimenting with a new model from Breville called Smart Scoop. It is fully automated and equipped with an internal compressor, so that no parts need chilling, and it is ready to go at the push of a button. All you have to do is make your base, chill it well, and you are half an hour away from perfect, smooth, rich ice cream. Strawberry, made with a fresh purée of field-harvested local berries. Vanilla chocolate chip, made with hand-chopped Valrhona dark chocolate, grass-fed organic cream, farm eggs and Tahitian vanilla bean. Or my favourite, praline, with a 50/50 split of hazelnut and almond paste churned into the custard.

The odd thing about making ice cream at home is that for that first half-hour or so after the freshly churned ice cream comes out of the machine, it has the same smooth and creamy mouth feel as soft serve. It just tastes a lot better, because of the clarity of its flavour and the absence of chemical aftertaste. Thereafter, for about a week if you’ve made it stabilizer-free—and two or three if you mixed in a little gelatin or agar or some other natural stabilizer—you’ve still got a perfect tub of all-natural ice cream. That’s right: ice cream that’s good for you. If you want some exercise, too, you can borrow my Husqvarna.