By Community Foundations of Canada October 7, 2022 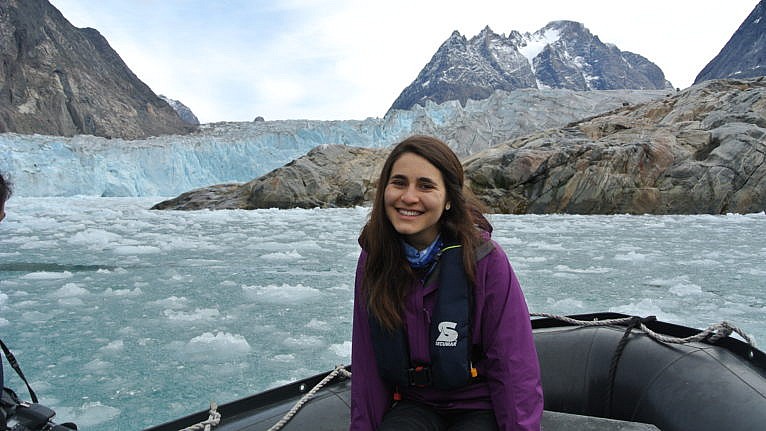 Thanks to the connections she made as a Queen Elizabeth Scholar in India, B.C.’s Marina Melanidis was also able to join an expedition to see the impacts of climate change in the Arctic.

Studying abroad had always appealed to Marina Melanidis, but financially, it was out of the question.

At 19, she was living with her parents to save money and making 90-minute trips by bus and train to the University of British Columbia, where she was studying global perspectives on natural resources conservation.

While searching for co-op programs, she spotted a posting to be a Queen Elizabeth Scholar at the Wildlife Institute of India. She leapt at the opportunity. After an interview, she was selected, and in little more than a month, she was on a plane. It was her first major trip without her parents.

“I went to India for four and a half months, and it was one of the most incredible, challenging, rewarding experiences of my life,” says Melanidis. “I directly attribute a lot of where I am now to that experience and my relationship with Queen Elizabeth Scholars.”

The program is an invaluable part of the legacy of Queen Elizabeth II, who championed global connections through her work with the Commonwealth. Founded in 2012 to mark the Diamond Jubilee, Queen Elizabeth Scholars is a made-in-Canada initiative that promotes international student exchange and civic engagement through project-based scholarships. To date, more than 1,000 scholars have completed placements in 59 countries. The Rideau Hall Foundation leads the program in collaboration with Community Foundations of Canada (CFC), Universities Canada and Canadian universities.

CFC President Andrea Dicks says the global connections forged by Queen Elizabeth Scholars are particularly important now. “The pandemic has shown us that our world is smaller than we think,” Dicks says. “This program fosters a global culture of community. When people come together, we can solve big problems. To face the challenges of the future, we need to draw on our collective capabilities and foster global leaders.”

For Melanidis, the program generated other unexpected opportunities. Two years after her trip, thanks to connections she made in India, she joined a Students on Ice expedition to see the impacts of climate change in the Arctic.

In 2019, her international experiences spurred her to launch Youth4Nature, a youth-led, global non-profit that works to educate, empower and mobilize young people to find solutions for ecological and climate crises. Today, Melanidis serves as development director, having recently defended her master’s thesis in UBC’s forestry department.

It’s a different career than Melanidis imagined at the start of university, when she thought she’d become a scientist. “I thought science was the answer,” she says. “After learning from people in India, I realized we can have the best science in the world, but if we’re not thinking about people — how the ways we address the climate crisis and biodiversity loss impact them — we’re not going to solve anything.”

“Education allows us to rethink what is possible,” says U.K.-based Canadian philanthropist Victor Dahdaleh, whose namesake foundation is a major contributor to the Queen Elizabeth Scholars program.

“My global education changed my perspective and gave me the confidence, connections and understanding to build a business and life with a global view,” Dahdaleh says. “The Queen Elizabeth Scholars program makes that invaluable opportunity accessible to young people today.”

Melanidis’s journey is proof positive. Today, she encourages students to make the most of their post-secondary years by looking for opportunities beyond the classroom. “There are so many that are literally only for university students. My biggest piece of advice would be to just go for it.”

For more information about the Queen Elizabeth Scholarship, visit queenelizabethscholars.ca.