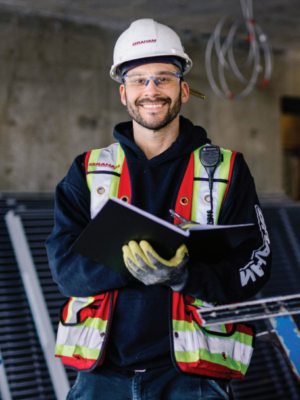 As more baby boomers retire from the construction industry, demand will grow for the next generation of skilled workers.

TALK TO ANYONE in construction and they’ll say everyone needs workers. Some industry experts believe the demand for skilled tradespeople will soon rise to dizzying heights. So, the industry is eager to encourage the next generation of workers to consider a career in the construction trades, says Alisdair Dickinson, vice-president of human resources for Graham, a leading North American construction company. “It doesn’t matter how many executives you have, if you don’t have tradespeople, you have no business,” he says. Dickinson says the construction industry’s reputation for job security and good pay makes it attractive, and the work is becoming more technologically and environmentally sophisticated. “This is a good place to go and make a difference, and earn, and have a rewarding Career.” Here, then, are five concrete reasons why it’s a great time to consider a career in construction-related skilled trades.

The rosy job outlook
While construction workers have traditionally lived in a boom-and-bust cycle, the coming years should be more consistent. According to the industry association BuildForce Canada, a steady flow of new construction projects and the retirement of tens of thousands of baby boomers each year will mean a shortage of around 29,000 skilled workers by 2027. Translation: it’s a great market for workers.

There’s a clear path to get trained and to get paid while doing it
Skilled tradespeople say the best way to get started is to find out what trades are most in demand. The federal government’s skilled trades information portal says carpenters are currently at the top of that list, with more than 17,000 job openings expected between 2021 and 2025. Boilermakers, bricklayers and welders are also highly sought after across several Canadian regions. Or simply try your hand at a trade that appeals to you. “The one piece of advice I think I would give to anybody looking at a trade is: Just find something that you’re marginally interested in and try it, you know?” says Stephen Buhler, a journeyman machinist who works for the University of Alberta on projects with researchers and students. “If you figure out you don’t like it, then try something else — especially when you’re young.”

Once you’ve settled on a trade, you’ll typically find an apprenticeship via an employer or union willing to offer on-the-job training. You can explore such opportunities on the federal government’s Job Bank website. Then, you’ll alternate between hands-on work and technical training in a more formal setting — and get paid for both. Once you’ve built up the required number of hours, you’ll get your “ticket” as a qualified journeyperson.

Canada has 55 trades that offer Red Seal credentials, which are recognized in every province and territory and allow you to look for jobs coast to coast. In some provinces, you’ll take an exam to earn your Red Seal once you reach the qualifying number of hours. The federal government offers financial support for apprentices working toward that certification.

Construction work is getting cleaner and greener
Some people assume that as soon as you’ve got your ticket, you’ll have to make a beeline for the oilpatch. But trades work on projects that help lower greenhouse gas emissions is becoming more available, says Luisa Da Silva, executive director of Iron + Earth, a not-for-profit that empowers fossil fuel and Indigenous workers to contribute to climate solutions through retraining and other activities.

A 2020 report from the Canada Green Building Council said the sector added 164,000 jobs in 2018 and could create 1.5 million more by 2030. “Right now, particularly in Alberta, there’s an absolute boom for renewables,” Da Silva says. “I speak with companies every single week and they’re looking for skilled workers.” More conventional construction projects are going greener, too, says Dickinson — that’s one way Graham stays on the leading edge in the industry. “Everything that we do now has that sustainability lens on it,” Dickinson says. “We want to be seen as an organization that drives the change, and changes the way we do things.”

Construction is going high tech, too
Dickinson says the construction industry is also adopting new technologies — an attractive prospect for those who want to work with digital tools as well as physical ones. “I think what’s going to happen over the next few years is that the definition of trade is going to evolve. Information technology teams are a fundamental, key part of the delivery of our projects. We need a broader spectrum of [skills].”

Construction work now involves 3-D modelling, virtual reality and other digital tools, depending on the project. There are machines that make work safer and more comfortable, such as robots that can be sent down a pipe to weld in a tricky-to-reach spot, Dickinson says. 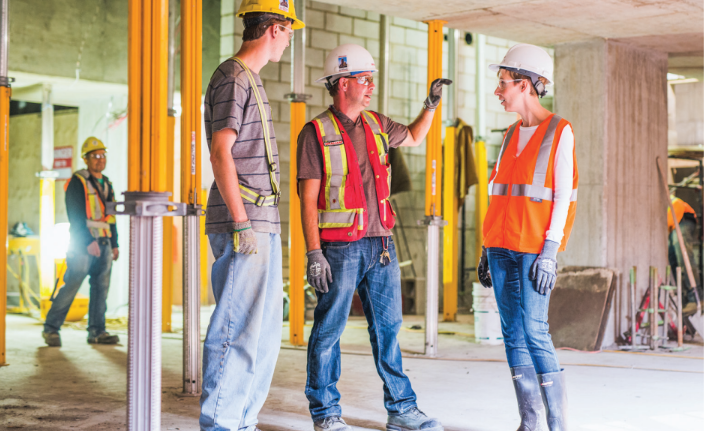 People who work in construction love the challenge and the job satisfaction
Tyler Carmichael wanted to work with rebar in part because it sounded like a challenge. Now he credits it with turning his life around. “I chose ironwork because basically I knew nothing about it and I knew it was going to be hard,” says Carmichael, who works for a small company in Calgary. He was right. “Sure, it’s hard. Rebar is an unforgiving trade,” he says. But it’s challenging in a way that has given him a discipline and focus that he could have never imagined when he was growing up in tough circumstances in Aklavik, N.W.T. “I’m 29 years old right now and I wish that I got into it sooner, because there’s room for progression, both in jobs and financially, but also mentally, physically, emotionally. I really stand behind my choice of joining the trades.”

Carmichael says he finds deep satisfaction after a job is done, seeing what he built. That’s a sentiment shared by almost everyone who works in construction, including Dickinson, who started his career “on the tools,” as he says. “The construction industry is one of the best places to get that feeling of enjoying every day going to work,” he adds. It’s all about the satisfaction of making something solid and useful. “You’re leaving your mark on the world.”

* While Graham does not directly employ craft and supervision in Canada, it works closely with a select group of allied subcontractors to ensure a positive work environment where skill development and career growth are supported.