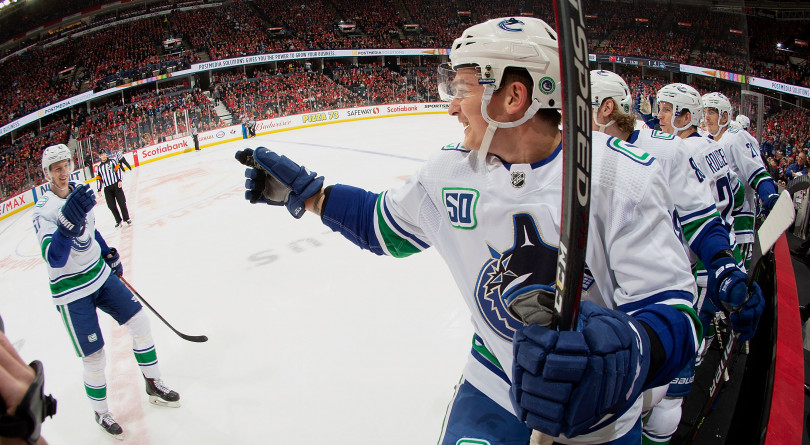 Jake Virtanen smiles after a goal against the Calgary Flames at Scotiabank Saddledome on Dec. 29, 2019 in Calgary (Gerry Thomas/NHLI via Getty Images)

As of this writing, the Vancouver Canucks are on a five game wining streak, including four important games against division rivals. With 46 points in 40 games, the Canucks are by no means a dominating team, but they have been mostly consistent so far this season and have the benefit of playing in the weakest division in the league: As of this writing, a 93-point regular season could be enough to secure the top seed in the Pacific Division. It would be the lowest total for a division winner since the NHL changed its playoff format (Last year, the playoff threshold in the eastern conference was 98 points.)

The Canucks have the highest goal differential of all Pacific Division teams and third highest in the West after the Blues and Avalanche, which partly explains their favourable projected position according to the model. Here is the point progression and projection for the Vancouver Canucks: 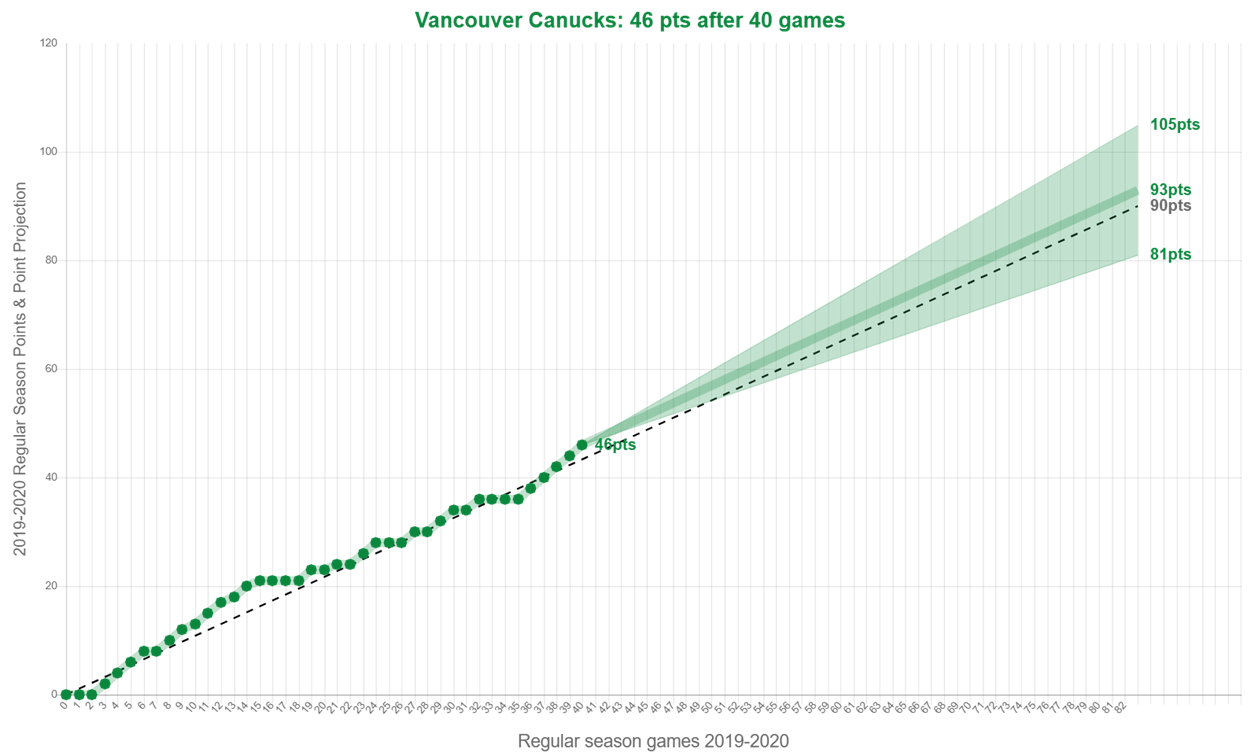 (On the graph above, the dotted line indicates the playoff threshold in the Western Conference.)

If the Canucks manage to win the Pacific, one of their potential first round opponents could be the Winnipeg Jets—which would be their first match-up since 1993.

Speaking of the Jets, while they may not be on pace to match their 99-points record from last season (which then ended in the first round against eventual Stanley Cup champion Blues), they have played much better in the second quarter of the season than in the first. In October, the Jets’ record was a poor 6-7-0. Since then, they have played at a playoff pace of 16-8-3. 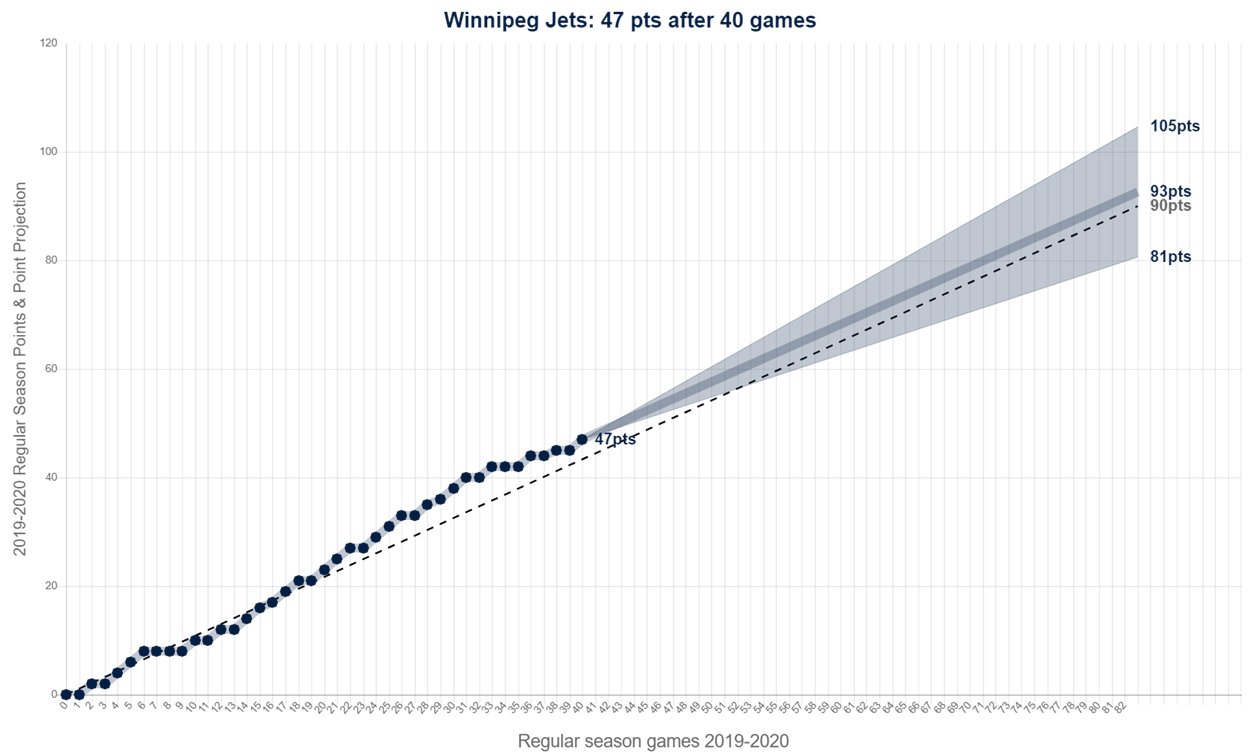 The Jets must also deal with a much tougher division than Vancouver: as it currently stands, the fourth-placed Jets hold a points percentage (.587)  higher than any Pacific Division team, which explains why the Central Division could send five of its seven teams to the playoffs (Blues, Avalanche, Stars, Jets and Predators).

In fact, the easier path for Winnipeg—should it qualify for the playoffs at all—would be to finish as the first wildcard (WC1) in the West, since it would be transferred to the much weaker Pacific division bracket.

Here is a look at the Western Conference projection: 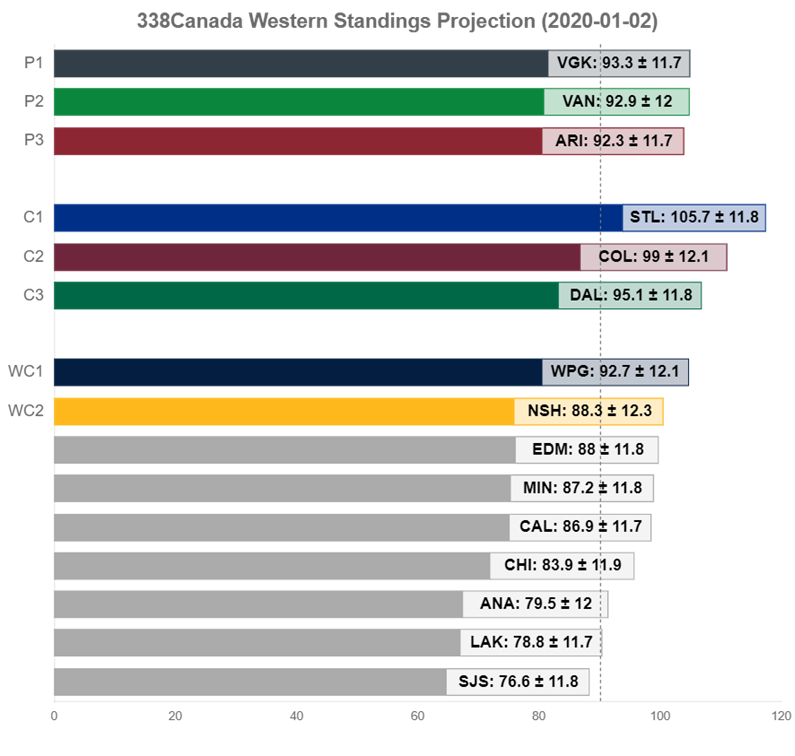 Some observations from the standings’ projections:

What about the Alberta teams?

The Edmonton Oilers began the season by winning 10 of their first 15 games (10-4-1) and held top spot in the Western Conference. Since then, the Oilers have played much below the level of a playoff team with a record of 11-13-3. Edmonton still holds the last playoff spot as of this morning, and the 338Canada model has Edmonton on the playoff bubble. 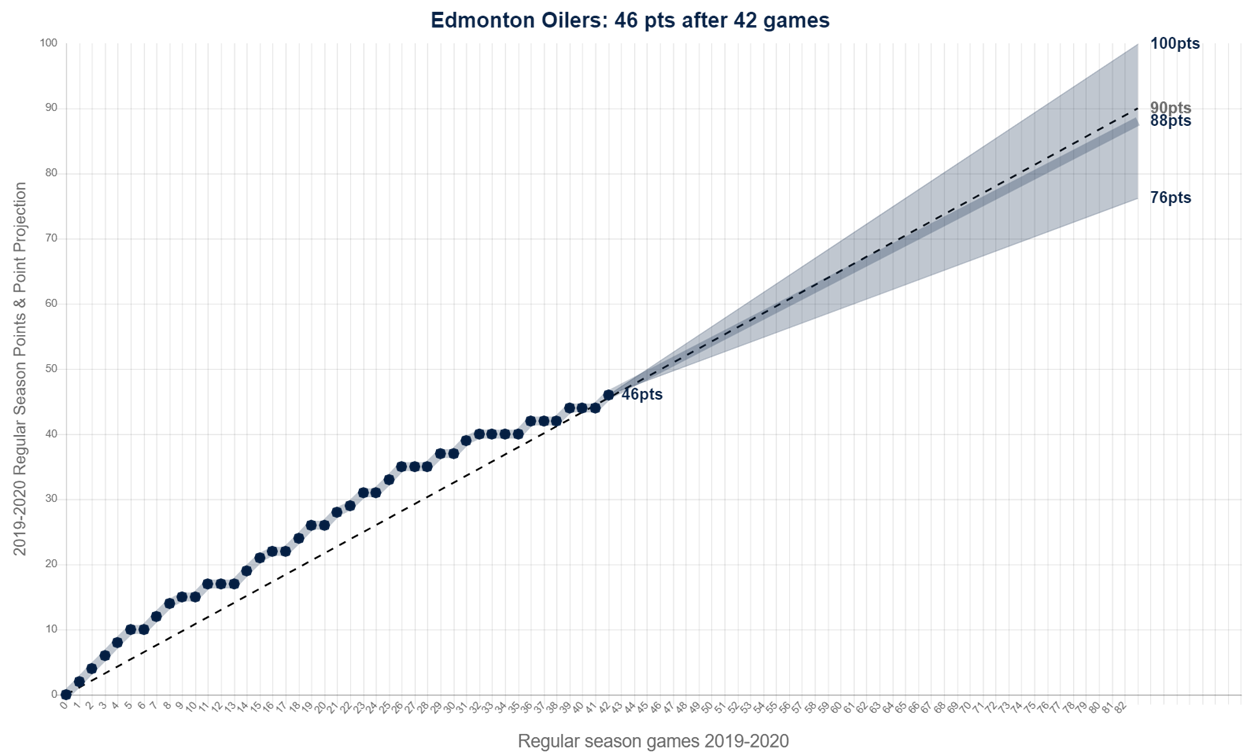 But were I a betting man, I would bet against the Oilers making the playoffs (again) this year. Look at the following chart: the horizontal axis is the goals-for average and the vertical axis, the goal-against average (inverted). Both axes are located at the league average: 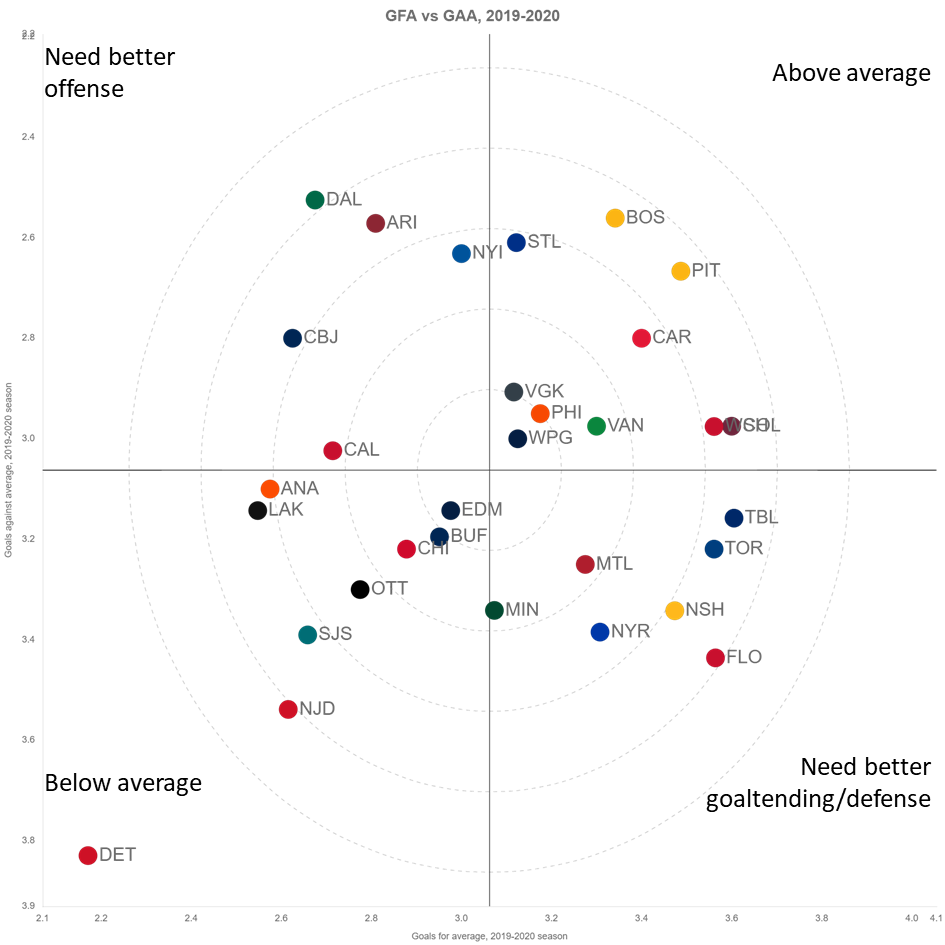 (As you can see, this season’s Detroit Red Wing team has been historically bad… look at the far lower-left quadrant.)

Let’s take a closer look at the western Canadian teams: 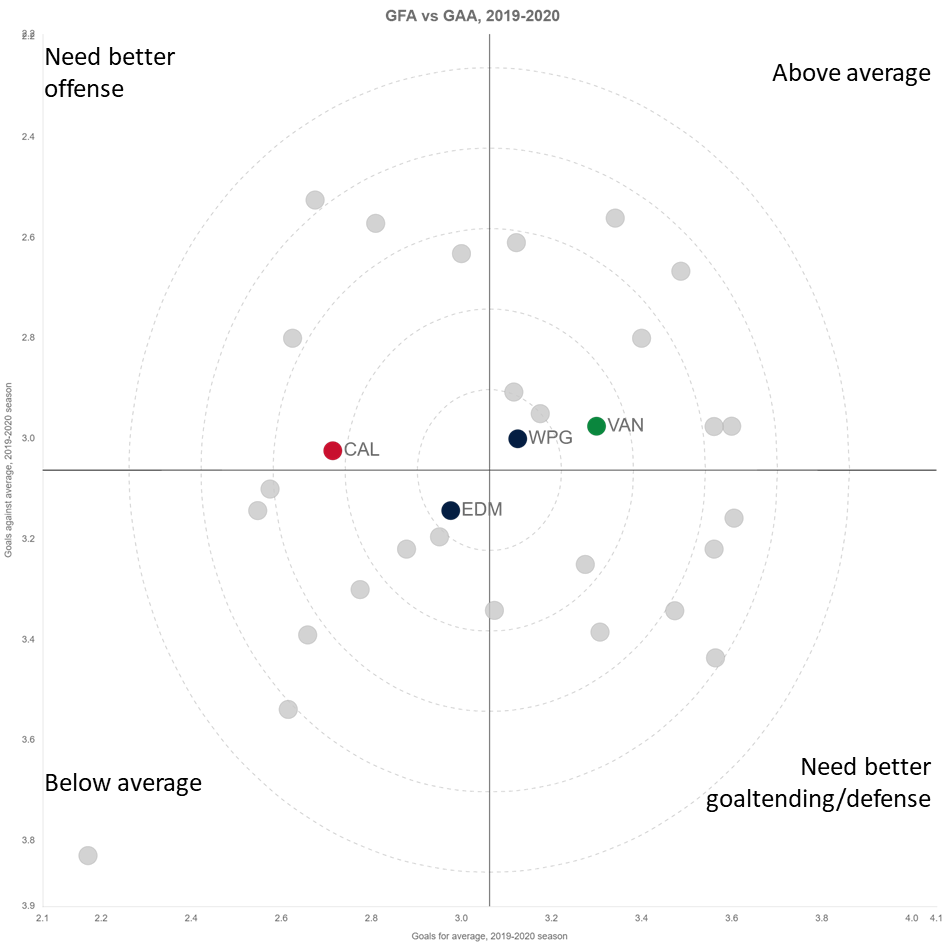 Both Vancouver’s and Winnipeg’s goals for and against averages currently stand above the league’s average (albeit not by an important margin, but still). The Oilers, since their hot start in October, have been slipping gradually to the lower-left quadrant—despite having on their roster two of the best players in the world in the prime of their careers. We shall see how the Oilers progress in the second half of the season, but it looks like recent history could repeat itself in Edmonton.

Finally, the Calgary Flames have been a disappointment this season. Calgary finished first the West last season with 50 wins and 107 points, but lost in the first round against wildcard Colorado. As you can see from the graph below, the Flames have played inconsistent hockey all season so far: 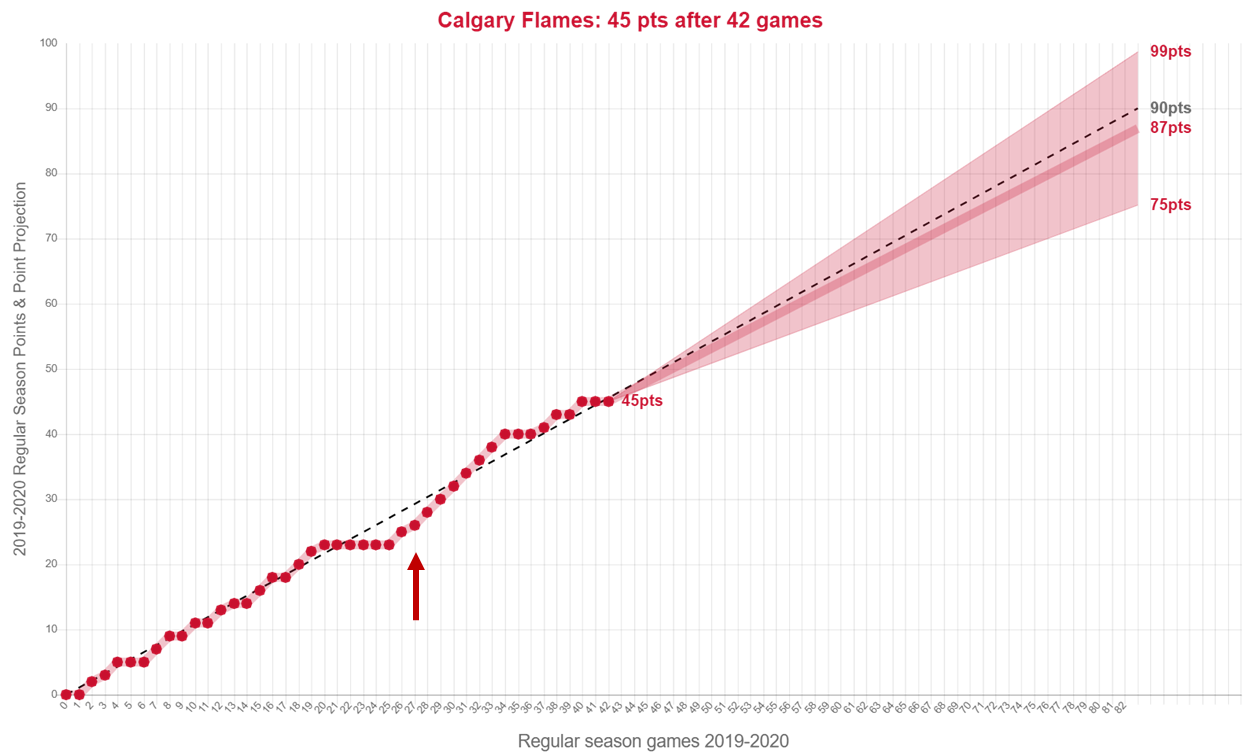 Calgary went on a hot streak right after the firing of head coach Bill Peters (indicated by the red arrow), but have lost six of eight games since that streak ended.

Nevertheless, with both Calgary and Edmonton with negative goal differentials at the half-way mark of the season, both teams need a major turnaround to qualify for the playoffs. In the last three seasons, no team with a negative differential has qualified for the playoffs since the 2016-2017 Ottawa Senators (and, frankly, that was an anomaly). Their playoff hopes partly lie in the fact that the Pacific Division is so weak.