A bandwagoner's guide to the Toronto Raptors

From our friends at Flare, everything you need to know about Canada's favourite basketball team as the NBA Finals get underway 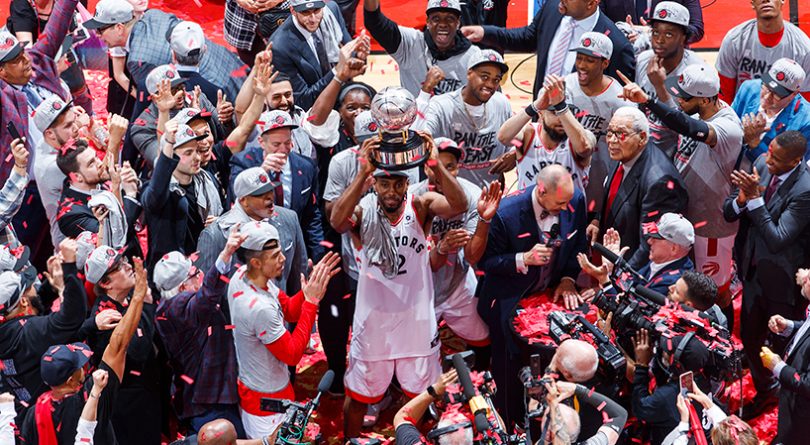 The King of the North, Kawhi Leonard (Getty Images)

We’re officially reclaiming the word bandwagoner. Because, what’s so wrong about cheering for a team that’s on the up and up? I mean, we all hopped on the Game of Thronesbandwagon together, didn’t we? And that was a legit hoot—well, mostly.

Listen: A fan is a fan is a fan. And, with the Toronto Raptors in the NBA Finals for the first time in franchise history, we say: the more the merrier.

Still, as a bandwagon fan, it can be helpful (and more enjoyable) to know some of the background on your new favourite team. So, here’s a quick NBA Finals primer to get you all set for the series.

Who are the Raptors playing in the NBA Finals?

The Raptors are playing the Golden State Warriors (aka Dubs…which is a short form for “W”). The Dubs are in the midst of a dynasty that includes winning the last two championships and three of the last four. What, like it’s hard? And, much to our chagrin, they’re favoured to three-peat. But, the Raps won both regular season games against the Warriors this season, so we’re feeling confident.

Who plays for the Golden State Warriors?

They’re led by three-point king Stephen Curry, and superstars Klay Thompson and Kevin Durant (aka KD). However, KD is still recovering from a right calf sprain and it’s unlikely he’ll play in Game 1 on Thursday.

When do the Finals start?

The NBA Finals tip off at 9 p.m. ET on May 30 in Toronto. That’s right. The Raps were the better regular-season team and therefore have home-court advantage. That means games 1, 2, 5 and 7 will be played in Toronto. (It’s a best-of-seven series, i.e. the victor has to win four games, so games 5 and 7 might not even happen.)

Where is Jurassic Park and, uh, what is it?

During the playoffs, and sometimes even during the regular season, it’s an area where the most dedicated and party-seeking Toronto Raptors fans go to watch the game on the massive jumbotron outside of the arena. Jurassic Park has been absolutely lit these playoffs with cameo appearances on the big stage from celebs like Drake. Check out the craziness for yourself here.

Who is Kawhi Leonard?

Kawhi Leonard, also known as “The Claw” for his abnormally large hands, is a small forward for the Raptors. Leonard is easily the best player on the Raps and is arguably the best player in the league. He literally put the Raptors on his back during the playoffs, scoring an average of just over 31 points per game—only six players in the history of the NBA have ever reached that milestone.

You might hear that Leonard is “one of the best two-way players in the NBA today” meaning that he’s stellar at both offence and defence. (He can easily steal the ball thanks to those massive af hands.) Prior to the emotional trade in July 2018 that saw Raptors lifer DeMar DeRozan traded to San Antonio in return for Leonard, he played for the Spurs for seven years and led them to a championship in 2014, where he was also named the Finals Most Valuable Player. He’s accomplished all of this by the ripe age of 27. Damn.

More importantly, Leonard is a “fun guy” with a great laugh. But actually, he is a sweet, quiet, dude who legit just loves to play basketball. And in a league full of outspoken and overzealous superstars, Leonard’s low-key, modest and humble demeanour is as refreshing as a mojito on a hot summer’s day.

What about Kyle Lowry?

Point guard Kyle Lowry has played for Toronto for seven seasons and is the beloved captain and hype-man of the Raps. From not making the playoffs, to losing his best friendto a trade, to winning the franchise’s FIRST-EVER Eastern Conference title, Lowry has been through ALL the highs and lows. Just like how you deserved that ice-cream after your spin class, Lowry deserves this NBA Finals.

What we love most about Lowry is his energy. When he’s on his game, the whole team is on their game. When he makes a massive defensive play, Scotiabank Arena lights up. And when he’s joking around with his teammates and doing his hilarious pre-game handshake ritual, you can’t help but smile.

What is Drake’s role with the Raptors?

As a Toronto Raptors superfan, Drake is the team’s official global ambassador. Outside of courtside seats, we’re not too sure what a “global ambassador” role actually entails. But we’re definitely all for Drake bringing a ton of (sometimes manic) energy to the Raptors courtside. However, not everyone is a fan, with many calling his antics “disrespectful,” including Smash Mouth (yes, the “hey now, you’re an all star” Smash Mouth) who told Drake to “sit down.” Party poopers.

Who is Uncle Dennis? He sounds fun.

Uncle Dennis, not to be confused with Uncle Jesse, is Kawhi Leonard’s uncle, Denis Robertson. He’s also the star player’s Chief Career and Business Strategist, meaning he has MAJOR influence on Leonard’s career, including where he plays. (Keep reading for more on that!)

Uncle Dennis also has major influence in Leonard’s personal life. When Leonard was  just 16, his father Mark Leonard was tragically shot and killed at a car wash he owned in Compton. Sadly, no suspects were arrested and no answers provided to Leonard and his family. Awful. From that day on, Uncle Dennis has stepped in to help the family.

So, while Uncle Dennis is said to be a new trusted business influence in Leonard’s life, he’s always been a staple in the fam.

Will Kawhi stay in Toronto?

This is the million-dollar question. Short answer? We don’t know, but we really hope so. Leonard is a free agent at the end of the season, meaning his contract with the Raptors ends after the Finals and he has the right to sign with any team he wants. Rumour has it Leonard wants to return to California (where he’s from); however, Toronto (the team and its fans) definitely want him to stay.

The good news? Making it to the Finals this year certainly increases our chances of retaining him. And, good old Uncle Dennis was recently spotted hugging Raptors President Masai Ujiri (the brains behind the DeMar–Kawhi trade and also just generally an awesome guy) after Leonard’s epic final second series-winning basket against the Philadelphia 76ers. So, if that’s any indication of serious bonding, things are certainly trending in the right direction. Fingers crossed.

OK, so where are the best bars in Toronto to watch the game?

The more TV’s the better! And when it comes to that, you can’t beat Real Sports Bar & Grill. However, because it’s right beside Scotiabank Arena and Jurassic Park, it’s also almostimpossible to get a table. More realistic options include: Northern Maverick on King West, Dog & Bear on Queen West, The Corner Place in the east end and Shark Club at Yonge & Dundas Square.

*Pro Tip*: Wherever you decide to go to, make sure they are playing the commentary and not just the picture. Overlaying random music with the game, even if it’s Ed Sheeran and Justin Bieber’s new banger, just won’t cut it.

What should I wear to a Raptors game?

A huge reason why we love basketball is because of its culture, which is beautifully interwoven with fashion. If you’re lucky enough (and have a spare $60K) to score tickets to a Finals game, planning your outfit is going to be half the fun. But, tbh, even if you are going to a bar to watch the game or hanging with friends and streaming it from home, you can’t go wrong with our fave, classic combo: a jersey, a pair of ripped jeans and booties or sneakers.

Don’t have a jersey? No sweat. This $40 tee shirt is a must-have (and all proceeds from its purchase go to the charity Sistering TO). Coupled with a leather skirt and some cute sneakers, it’s the perfect ’fit for the Finals.

If you simply want to pull together something you already have in your closet, go for some combo of black, white, red and purple—because you gotta rep the 6ix.

So, there you have it. You’re all caught up for this year’s Raptors vs. Warriors NBA Finals! Welcome to the Raptors fam—we’re pretty awesome.