Activist seeks injunction against use of Cleveland team name 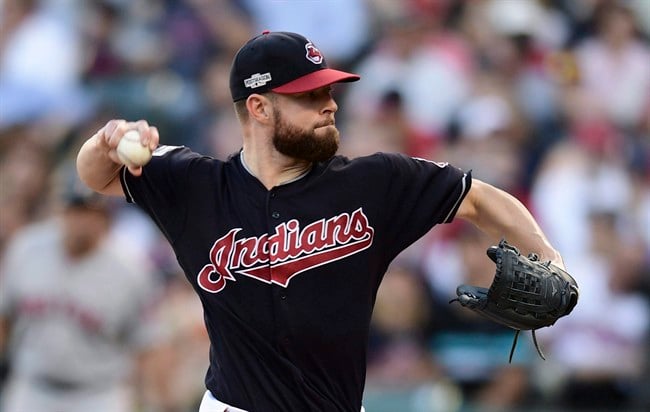 Cleveland Indians pitcher Corey Kluber throws against the Boston Red Sox in the fourth inning during Game 2 of baseball’s American League Division Series, Friday, Oct. 7, 2016, in Cleveland. Blue Jays broadcaster Jerry Howarth won’t be using the word “Indians” when he calls the American League Championship Series between Toronto and Cleveland, and he says he hasn’t uttered the team nickname on the air for nearly 25 years. (David Dermer/CP)

TORONTO – A prominent indigenous activist and architect is seeking a court ruling that would prevent the Cleveland Indians from wearing their regular jerseys, using their team name and displaying their logo when they play in Toronto this week.

Douglas Cardinal, an officer of the Order of Canada, has filed an application to the Ontario Superior Court and complaints to the Human Rights Tribunal of Ontario and Canadian Human Rights Commission.

He’s arguing that the Cleveland Indians’ team name and mascot — Chief Wahoo, a cartoon man with red skin and a feather in his headband — are offensive and discriminatory.

His application asks the court to bar the usage of the name and logo by the team, Major League Baseball and Rogers Communications, which is broadcasting the American League Championship Series.

Rogers also owns the Blue Jays and the stadium they play in, the Rogers Centre.

The Human Rights Commission and Tribunal can take months to rule on complaints, but the Superior Court is much quicker: a court hearing is scheduled for Monday, said Monique Jileson, lead counsel on the case. The court can order an injunction that would keep the team and broadcasters from using the name until the human rights cases can be decided.

“The risk is that it can incite discrimination against indigenous people in Canada, and it’s the same with the name ‘Indians’,” Jileson said, adding that baseball is a service — it’s entertainment — and Canada’s Human Rights Act prevents people and corporations from discriminating in the provision of a service.

Michael Swinwood, who is Cardinal’s lawyer but is not formally involved in these proceedings, said that the team should stop using its name and logo altogether.

“We should be displaying more consciousness in the choices we make in relation to logos,” he said. “It’s offensive to indigenous people, and it needs to be addressed.”

He said that the logo reflects stereotypes and misunderstandings about indigenous cultures, lumping diverse groups of First Nations into one offensive, homogenous cartoon.

“It’s much deeper and more profound than a logo being offensive. It’s really an indicator of why that relationship (between First Nations peoples and society at large) is so flawed. Because there’s this lack of recognition of what the true conditions of native peoples have been over the last 500 years.”

But it’s not just the U.S. that has issues with team names and logos like this — Jileson noted that the Edmonton Eskimos have come under fire for using a term for Inuit that many consider outdated and derogatory.

It’s the reach of these games that sets the Cleveland team apart, she said. It’s the first time that Cleveland is playing the Blue Jays in Canada for a playoff event, and millions will have their eyes on the game, Jileson said, adding that CFL games are on a smaller scale, but that doesn’t mean they’re less worthy of our attention.

James Fuller, a spokesperson for Cardinal, said the Cleveland Indians should just be referred to as “the Cleveland team” for the time being.

He said he’s under the impression that the team has jerseys without its Chief Wahoo logo that players could wear.

Aaron Lazarus, a spokesperson for Rogers Communications, said in a statement that broadcasting the game without displaying the team name or logo “on the field, in the stands and in the stadium” would be “virtually impossible,” although Fuller said the application to the courts doesn’t include barring fans from carrying paraphernalia with the logo or team name.

Lazarus also said the company understands “the Cleveland name and logo is a concern for a number of Canadians,” but added, “the playoff series between the Jays and Cleveland is also significantly important to millions of passionate baseball fans across Canada. Punishing these fans by blocking the broadcast of the games doesn’t seem like the right solution.”

A representative from the Cleveland Indians said the team was “aware of the situation” but declined to say anything else.

Cleveland is currently leading the series 2-0.