Alphonso Davies on life as Canada's next great soccer star 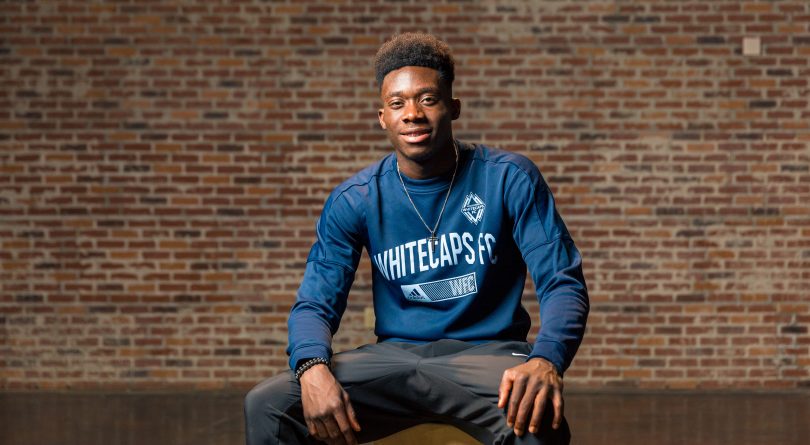 Alphonso Davies, a 17-year-old soccer player with an amazing backstory, already belongs on the first of these two lists, of players whose moves to European football clubs broke Major League Soccer’s unofficial record for a received transfer fee. And following his $13.5 million move from the Vancouver Whitecaps to Germany’s FC Bayern Munich, one of the richest, most storied teams in the world, Davies has the chance to join the second: that of athletes who have shown that Canadians can compete at the very highest level in their sports.

Davies was born in a refugee camp in Ghana, after his parents left Liberia in the midst of a civil war. The family moved to Canada when the boy was five, eventually settling in Edmonton. Davies himself moved to Vancouver in 2015 at 14 years old to join the Whitecaps academy, signing his first deal and making his first-team debut the following year. He’ll move to Bayern at the end of the year, once he turns 18 in November.

As he prepared for his first appearance at the MLS All-Star Game in Atlanta, the resolutely humble young winger talked to Murad Hemmadi about life as Canada’s next great soccer star. This interview has been edited for length and clarity.

Q: You’re the youngest player to play for the Whitecaps first team, and the youngest regular player on the current team by several years. What’s that like?

A: It’s a good feeling. At times, they treat me like an adult, but they also treat me like a kid. When you’re playing like that, you tend to grow up faster than normal 17-year-old kids It’s not new. I’ve always played a couple years up. In this case, I’m playing with grown men, way older—nine, 10 years older than me.

Q: This is the largest transfer fee ever paid for an MLS player. Does that matter to you?

A: I don’t really think it does. It’s a good thing to have, [to be] a record-breaker, but usually people see what you do on the field instead of off. But it’s a step in the right direction.

Q: Whitecaps owner Jeff Mallett has said that the team is planning to put a lot of the money from your transfer fee back into youth development, and your clubs in Edmonton could also receive payments as a result of your move.

A: When I was younger, soccer was my life. I always wanted to play. Knowing some of my transfer fee is going to go back into youth soccer when we’re preparing for [World Cup] 2026—kids my age are looking forward to the future. That money going back into there, it’s a good way to give back.

Q: When Canada co-hosts the World Cup in 2026 with the United States and Mexico, you’ll be 25. That’s typically the beginning of the peak of a soccer player’s career. Give me your least humble prediction—what are we going to see from you in 2026?

A: I think you’re going to see the same me, but a little bit older, I guess.

Q: You’re not going to tell me that you’ll win the Golden Boot [for top scorer]?

A: Oh, yeah, I’ma try. But World Cups are mysteries—football is a mystery. Anything can happen.

RELATED: Will co-hosting a World Cup put Canadian soccer on a roll?

Q. There were a couple of other countries you could have played for—you were born in Ghana, and your parents are from Liberia. Canada doesn’t necessarily have the greatest soccer tradition [on the men’s side]. Why choose to play for it?

A: Ever since I was little, when I moved to Canada, Canada has been my home. I’ve lived here for almost 13 years now. My parents love it, I love it. It’s the country that took me in, that made me the man I am today.

Q: You played for Canada’s youth soccer teams before you got your citizenship last year. Did it feel strange to pull on that jersey in those circumstances?

A: It was a little bit strange, but at the end of the day, I got it [citizenship]. When I was playing with the youth guys, it was an eye-opener. That’s when you start thinking, Should I continue [playing]? Most of the guys on the team are from other places, and [are] choosing to play for Canada. How proud they are to play for the country—it’s just amazing.

Q. In June, you spoke at the FIFA World Congress in support of the 2026 World Cup bid. That was your message from Canada. What’s your message for Canadians?

Q: You promised your mum when you came to Vancouver that even if you made the first team, you’d finish high school. That’s going to be difficult with just six months left in Canada. Putting other things on hold to do this is a big decision.

A: School is very important to me and my family. I’m trying my best to finish it, but if the time comes when I can’t, then I guess I’ll have to finish it later in my career. Right now, I’m chipping away at it, as much as I can before I go over.

Q: Who did you look up to, growing up?

A: My [older] brother and my dad played, so when I was growing up, I looked up to them. My dad, he played striker, and I wanted to play there too. But they put me on the wing. [F.C. Barcelona and Argentina’s Lionel] Messi is my idol, even though I might play against him. Growing up, I loved Messi. I love how he dribbles, how he plays the game, it just makes it look so easy and it makes it look so fun.

Q: What about in life?

A: In life, [NBA living legend] LeBron James. He’s a hard worker, his story is amazing. He is a great guy, a great father to his kids, a great husband to his wife. LeBron is like one of those perfect human beings, as you could say. 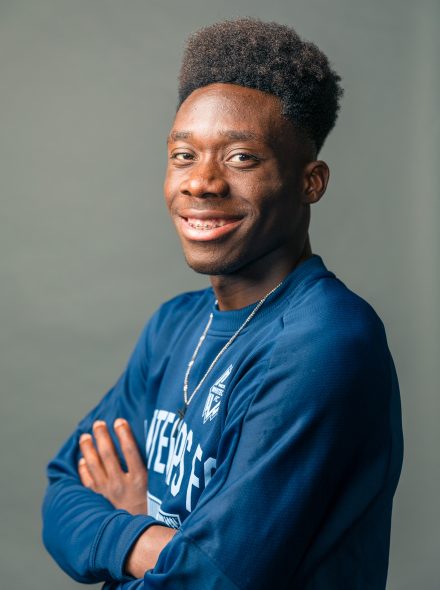 Q: The Whitecaps made a documentary about your family’s story when you got your citizenship. How much of that did you know growing up?

A: I was aware of most of it. I was there, but I didn’t have really a sense [of] what they were going through at the time, not until my mum started explaining as I was getting older. When I moved to Windsor, Ont., I think that’s my earliest memory. When I experienced snow for the first time! It’s kind of cool. I learned how to ride a bike there, I attended my first school there.

Q: Has the family been back to Liberia, or Ghana? Do you still have family there?

A: No, I haven’t been back. I would like to go back, I’m hoping I can go back at one point in my life. My [older] brother’s still there. We’re trying to get him over here; it’s taking quite a while, but I’m sure we can do it.

Q: There’s been a lot of focus on your family’s story recently. How does it feel to be seen as a symbol of refugee success in Canada?

A: I don’t know if I’m a symbol or not. There’s many kids out there that are going through the same things as I did. I just want to tell my side of the story, and I’m glad people are taking it so positively and thinking that I’m a symbol. I mean, I never did. I’m playing the sport that I love—that’s what I’m thinking about.

Q: What does this move mean for your family?

A: I saw my parents before we went to Philly to do the medical. They came to the airport, and congratulated me. My mum had a big smile on her face, and my mum and dad were really proud of me. It means a lot. Family’s always important in a young soccer player’s life, or in anyone’s life. I just want to make them happy and show that I deserve to be out there.

Q. You moved to Vancouver at 14 years old. How did you cope with such a big change?

A: My first days in the academy, I was excited to play, to play for a professional club. One week, two weeks go by, [and I] started getting homesick. Luckily, we had a break coming up soon, and I went back to Edmonton, then went back again for Christmas. And when I went back for Christmas, I realized there was nothing there for me anymore. My family’s there, but as far as potential, I had to focus on me being in Vancouver and move on from Edmonton.

Q. What was the point at which it became clear that you were going to make it as a soccer player?

A: When I signed my USL [United Soccer League, the second-division in which the Whitecaps’ reserve team played] contract, that’s when I realized, I can really become a professional soccer player. When I was playing [before], I was just playing for fun. I always dreamed about being a pro, but something inside me thought, Maybe, but I might not make it. You know, the negativity inside of me came out. But when I signed my that USL contract, that’s when my positive side came out: I can do this. I can go far in this sport. I’m going to keep working, keep striving, to be one of the best.

Q: Vancouver clearly loves you. Is it weird to have people recognizing you out in public or commenting on your Instagram?

A: At first, when people saw me in public and they’re like, ‘Alphonso, can we get a picture? Can you sign this?’ it was a little bit strange, because I hadn’t done it before. But as time goes on you get used to it.

Q. Are you taking German lessons?

A: Stefan Marinovic [the Whitecaps goalkeeper who spent eight years playing in Germany], he tries to teach me, but I don’t think he knows a whole lot. I might be taking some German lessons these next six months, to get a little bit of a sense of, ‘Hi,’ or a little bit of conversation. Instead of going there and knowing nothing and starting to learn it all [I want] to already have some of it in my head, and then learn even more there.

Q. What do you think they saw in you?

A: I’m not sure. I guess they saw the videos and they think I’m a good player—my speed, my ball control. I have confidence in my ability, and I tend to exploit that on the field.