Matt Devlin called every Raptor shot on their road to glory

The voice of the Raptors, Matt Devlin—who calmed the crowd during a scary moment at the recent Raptors celebration—has been calling games for 11 years. With a dash of Canada. 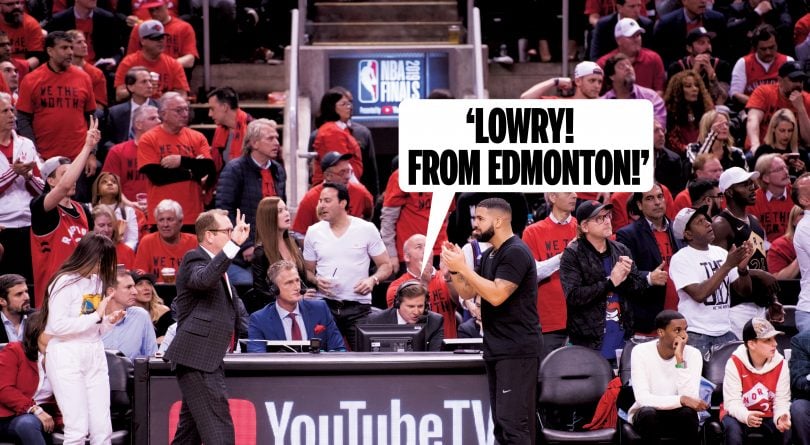 Thirty seconds from the ﬁnal buzzer in the ﬁrst game of the NBA Finals, with 19,983 screaming fans on their feet at Scotiabank Arena, Kyle Lowry sunk the deepest three-point bucket of the night. His game-sealing 28-foot dagger sent Raptors play-by-play man Matt Devlin into a frenzy. “Lowry! From Edmonton! To put it away!”

Devlin, a courtside mainstay and the voice of Raptors broadcasts for 11 years, says name-checking Alberta’s capital city on the basket that cemented the Raptors’ 118-109 victory was no accident. Every time the team hit from long range, Devlin rhymed off a different provincial or territorial capital. Before Lowry nailed his third and ﬁnal shot of the night from beyond the arc, only Edmonton had gone unnamed. “I had no idea they’d hit 13 that night,” says Devlin, who called out Toronto, naturally, after wingman Danny Green opened the scoring for the home team.

Typically, Devlin doesn’t plan his callouts—even his novel approach to Game 1 was only hatched while on the way to the arena. (In the second game of the series, keen listeners would have recognized Kamloops, B.C., Pickering, Ont., and other hometowns of active Canadian NBA players. Devlin thought of that, too, on the way to the arena, and scribbled notes during commercial breaks.) But for several years Devlin has honoured long-range shots with an ode to a dot somewhere on the sprawling map of Canada. Three years ago, after another crunch-time three-pointer from Lowry put away the Miami Heat in a playoff game, Devlin looked way north to Pond Inlet, Nunavut.

He’s mentioned dozens of places. It’s all part of an effort to respond to the national fan base the Raptors have cultivated. After far-flung fans noticed his ﬁrst callout, which he thinks may have been Mississauga, Ont., he says it “took on a life of its own.”

What even Devlin didn’t realize at the time is he was carrying on something of a play-by-play tradition on Raptors broadcasts. His colourful predecessor in MLSE’s employ, Chuck Swirsky, gained notoriety with his own catchphrases—fans mostly remember the celebratory “Get out the salami and cheese, mama, this game is over!” But a few years into his own 10-year run with the team, Swirsky was ﬁrst to pay homage to cities and towns across the land, dedicating the ﬁrst three-pointer at every home game to a fan who’d written in from somewhere. “You can ring it up,” he called once, “from downtown Brandon, home of the Wheat Kings.”

Swirsky called the Raptors’ last-ever game played in the SkyDome, when 14,888 fans in the cavernous baseball stadium watched the home team beat the Milwaukee Bucks. Two days later, he and a sellout crowd of 19,800 witnessed the team crush the visiting Vancouver Grizzlies. Vince Carter, whom Swirsky nicknamed Air Canada Carter as a tribute to his dunking prowess—and the brand-new arena in which he played—scored a game-high 27 points.

When Carter was on the verge of leaving the team, Swirsky recalls an American columnist who predicted the franchise would relocate to basketball-crazed Louisville, Ky. “I still remind him of that often,” he jokes. Carter’s influence blossomed even after he left the team, as kids across the country who idolized him grew into serious threats on the court. In a league dominated by Americans, the 2018-19 season saw more Canadians on rosters than from any other country (apart from the U.S.).

Swirsky and Devlin have both called countless games beside Jack Armstrong, the beloved colour commentator whose courtside spot has spanned two decades. All three were born stateside: Armstrong’s trademark Brooklyn accent gives away his hometown. Swirsky, who spent two decades in the Chicago sports scene, was born in Norfolk, Va. Devlin, the voice of the Grizzlies and Charlotte Bobcats before he moved to Toronto, was born in Syracuse, N.Y. Swirsky sat in the chair for a decade, and Devlin’s occupied his seat for 11 years. (His long tenure earned him a spot emceeing the recent Raptors championship rally. He gained widespread appreciation during a scary moment, calming the crowd when a shooting occurred just outside Nathan Phillips Square.)

But both Swirsky and Devlin can now call themselves Canadian. Swirsky became a dual citizen a few months before he returned to Chicago, in 2008, as the radio voice of the Bulls. Devlin, whose three kids grew up in Toronto, is even newer to the concept of carrying a Canadian passport. After living here for more than a decade, he and his family took the oath of citizenship only about 12 hours after that 28-foot Lowry bomb. Small wonder he could name all those capital cities off the top of his head. He’d done his homework.