In 2020, hockey's racial reckoning came to a head. Here, 10 Black hockey players share their experiences with racism on the ice. 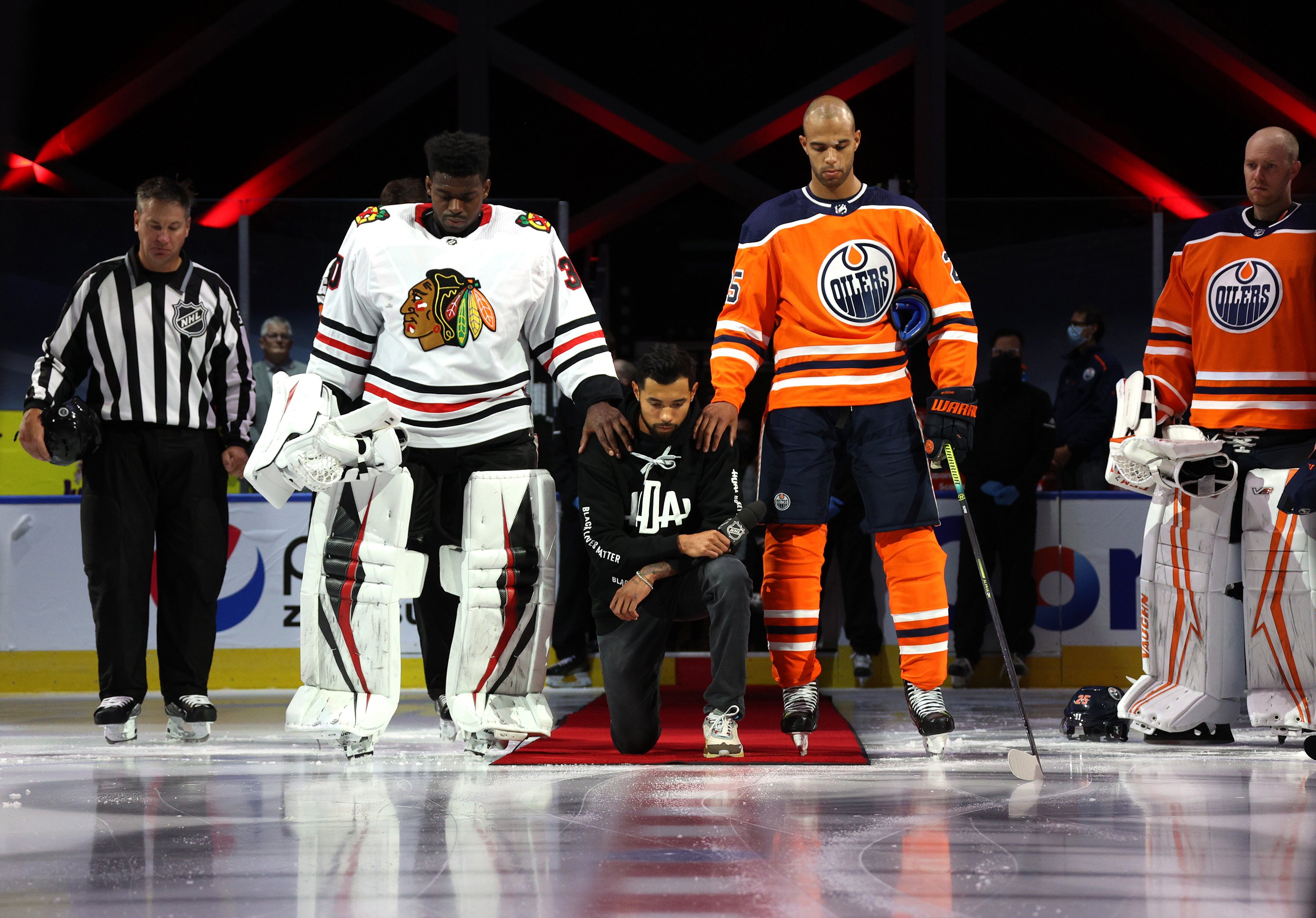 On Aug. 1, Dumba, a Filipino-Canadian player, became the first NHLer to take a knee, with support from Subban (left) and Nurse (Dave Sandford/NHLI/Getty Images)

Every year, the Institute for Diversity and Ethics in Sport (TIDES) conducts a report card for racial and gender diversity hiring (both on the playing field and in the league and team offices) in the major professional sports. Of the four major team leagues in North America—MLB, NBA, NFL and NHL—the NHL is the one league that doesn’t participate.

In a 2019 interview with Minnesota’s Star Tribune, NHL executive vice-president Kimberly Davis suggested the NHL may co-operate with TIDES in the future, provided its report gives context for the numbers.

For example, rather than simply assigning a low score for the NHL’s paltry number of Black players (27, as of the reporting in March 2019, and 18 in development), Davis suggested that the report be framed as “a plan of action on how you move from what is your baseline to the future.”

MORE: Hockey’s chance to reckon with its culture of abuse

But the “baseline” in hockey is that of a league slow to change in the face of a fan base and a world moving steadily away from white-dominated norms and standards. “People root for sports teams, follow sports, because it’s a communal activity,” said NHL commissioner Gary Bettman, in response to a question about outspoken athletes, during a 2017 panel discussion with other major league commissioners. “It may be one of the places where there is great unity within a community that transcends political divide.”

That may be true of the league’s insiders perhaps, but according to the NHL, its fans have no such convenience. In 2018, the league released a policy brief titled “Shifting Demographics and Hockey’s Future” (co-written by Davis and William H. Frey of the Brookings Institution).

The United States’ changing demographics through 2030 will see “a net loss of 15 million whites,” the report notes, as well as a “market gain” of 27 million minorities. “As the demographics of the labour force population continue to shift, so too does the cultural relevance of activities millennial parents will look to offer their children,” the report continues. “Hockey . . . will need an intentional effort to introduce the value of the game to new parents who may not have played as children.”

MORE: Don Cherry was an unchanging man in a changing world. Finally, the world caught him out.

Despite this knowledge, the resumption of the COVID-interrupted 2019-2020 season, within the Toronto/Edmonton “bubble” of empty stadiums and hermetically organized hotel rooms, seemed to be taking place within a social bubble as well. While protest movements roiled America after the killings of George Floyd and Breonna Taylor, the NHL rolled out its #WeSkateFor campaign in late July, making no direct statement on the protest movements, or any acknowledgement of the systemic reasons those protests were happening to begin with.

Prior to the months-long pause on the season, hockey culture was already in a state of recovery from a spate of race-related incidents and high-profile firings. The first domino to fall was Don Cherry, long known as a churlish antagonist to Québécois and European players, fired by Sportsnet for a xenophobic rant spectacular even for a self-declared “nationalist” of his calibre.

“Forget it; downtown Toronto, nobody wears a poppy,” said Cherry on the Nov. 9 edition of Coach’s Corner. “You people love . . . you love our way of life. You love our milk and honey. At least you could pay a couple of bucks for a [poppy] . . . [veterans] pay for your way of life, that you enjoy in Canada.”

A few weeks after Cherry’s firing, former Calgary Flames player Akim Aliu took to Twitter and alleged that, during their time together at the Rockford IceHogs, Calgary Flames coach Bill Peters addressed him with racial slurs during a pre-game skate. In an interview with TSN, Aliu said, “he walked in before a morning pre-game skate and said, ‘Hey Akim, I’m sick of you playing that n—er s–t,’ ” with regards to Aliu’s choice of music for the session. “I’m sick of hearing this n—ers f–king other n—ers in the ass stuff.”

A day later, Michal Jordán of the Carolina Hurricanes alleged Peters had not only kicked him, but also punched another player in the head. Peters tendered his resignation, doing so less than 10 days after Toronto Maple Leafs coach Mike Babcock had done the same for allegedly fostering a toxic locker room.

A few months later, in May 2020, Aliu penned an essay for the Players’ Tribune titled “Hockey Is Not for Everyone,” detailing his life in hockey, his family background prior to their move to Canada from Kyiv, Ukraine, and the difficulties he and his family faced with systemic and interpersonal racism throughout their lives. The gut-wrenching essay was warmly received by the hockey community broadly, but it was yet to be seen whether a shift could be effected within NHL culture.

In late July, the steadfastness of the league’s status-quo position moved Eric Trump, son of U.S. President Donald Trump, to thank players for not kneeling during the national anthem. In response, fans of the league took to social media, posting pictures of themselves kneeling, many stating outright: “If the players won’t, I will.”

The widespread fan response raised a question: amidst the turbulence of 2020, could the NHL finally be forced to live up to its empty promise that “hockey is for everyone”?

Then, in August, while protests continued to roil across the United States and Canada, Mathew Dumba of the Minnesota Wild took a knee on centre ice prior to a Chicago Blackhawks and Edmonton Oilers’ game. Dumba, a Filipino-Canadian player born and raised in the prairies, is an executive committee member for the Hockey Diversity Alliance (HDA), founded by seven other current and former NHL players including Aliu, Colorado’s Nazem Kadri and Buffalo’s Wayne Simmonds. According to the organization’s website, its mandate is to “eradicate systemic racism and intolerance in hockey.”

While the anthem played and Dumba kneeled, Chicago’s Malcolm Subban and Edmonton’s Darnell Nurse, both Black players, placed their hands on his shoulders. Finally, the NHL’s socio-political bubble appeared to pop.

Since that game, however, protests in the U.S. took on new life after the police shooting of Jacob Blake in Kenosha, Wis., on Aug. 23. The Milwaukee Bucks, a basketball team whose players have encountered racial profiling and use of force by police in recent years, did not show up to the court for Game 5 of their first-round playoff series against the Orlando Magic on Aug. 26.

The NHL’s immediate response was not to postpone games that night, but to hold a “moment of reflection” prior to the Tampa-Boston and Colorado-Dallas games—the moment lasting a mere 27 seconds for the Tampa-Boston game.

“I don’t think we should be here; I think the NHL should postpone the games,” said Sportsnet analyst and former NHL player Kelly Hrudey prior to the puck drop for that game. “I really feel we should be more supportive of Black Lives Matter.”

In an interview with Sportsnet’s Vancouver radio station, Dumba minced no words. “The NHL is always last to the party on these topics,” he said to hosts Satiar Shah and Andrew Walker. “If no one stands up and does anything, then it’s the same thing. That silence. You’re just outside, looking in on actually being leaders, and evoking real change, when you have such an opportunity to do so.”

The following night, the NHL finally took the opportunity by postponing the New York-Philadelphia and Las Vegas-Vancouver games.

As the scene plays out—that is, sports leagues resuming whatever normalcy is possible during a year where society has hovered for several months between dire emergency and possible collapse—the question remains: what does the future hold for Black players in a sport where the baseline is so often out of sync with broader social issues?

To answer that question we have spoken with hockey players from all walks of life and at various stages in their careers about their experiences within the sport, their challenges and their love of the game, as the narrative slowly but inexorably begins to change. 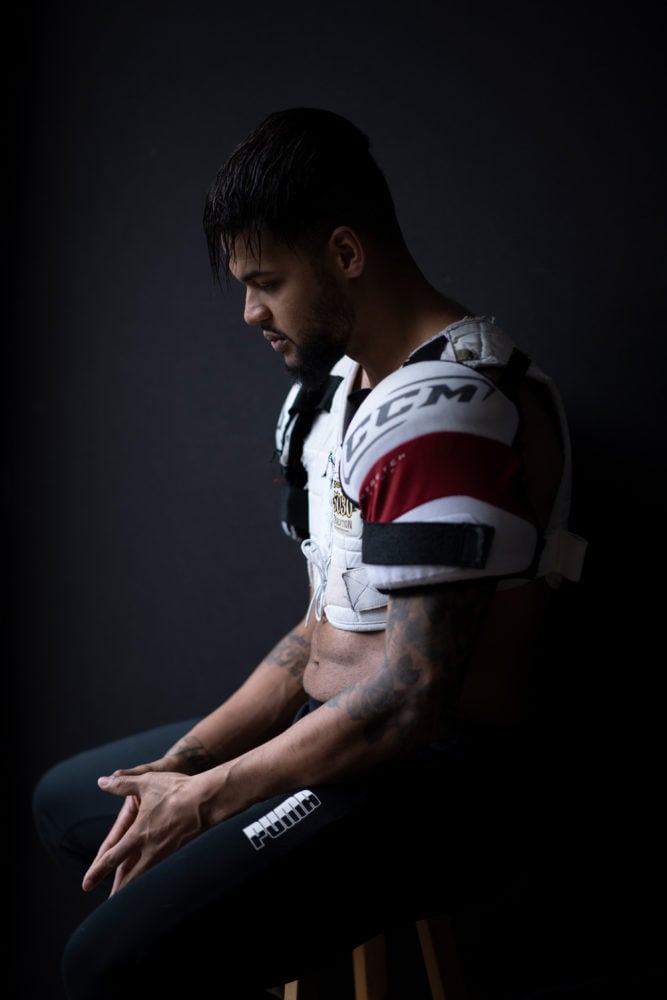 My experience with racism in hockey started the day I was dropped off to play junior hockey with the Windsor Spitfires. I was 16. I was at a teammate’s place and he asked, “What is this n---er doing at my house?”

The team’s bullying of me was non-stop, and it was led by Steve Downie. In my last game of minor hockey, I tore my Achilles tendon, so I was doing a lot of rehab. Downie would line up behind me and shoot pucks at my Achilles, he would put Tiger Balm in my jock and he’d throw my clothes over the arena roof.

I refused to play into the hockey tradition of hazing, and they decided to make me miserable because of it. I thought I did a positive thing by standing up to someone who was bullying me, but Downie went on to have a successful professional career; I was shunned by the hockey community for speaking out.

Despite my success in junior hockey, I was drafted in the second round of the 2007 NHL draft by the Chicago Blackhawks. That’s when the Bill Peters incident happened. It was at that point that I was blackballed from the league.

I was sent down to the East Coast league after the Peters situation, and later that year I was traded to the Atlanta Thrashers. I performed well in the American Hockey League and was told I’d have a good chance to start in the NHL the following season, but the Thrashers were sold to Winnipeg, and I was back under the same general manager that oversaw the incident with Bill Peters.

When I was on the Winnipeg Jets, I was constantly apologizing, asking if we could bury the hatchet. I was put in a position where I was apologizing to the general manager [Kevin Cheveldayoff] for trading me because his coach called me the N-word.

I went from having a shot at starting in the NHL to landing back in the minor leagues, where I faced another incident involving a staff member wearing blackface and asking me for a picture.

I have shed a lot of tears, but I have to keep pushing forward. I don’t want to be an example of someone who has had terrible things happen to them and then quit; I want to be remembered as someone who didn’t give up on his dream.

—As told to Andray Domise