Hicks, 23, played defensive back for the Canadian Football League team 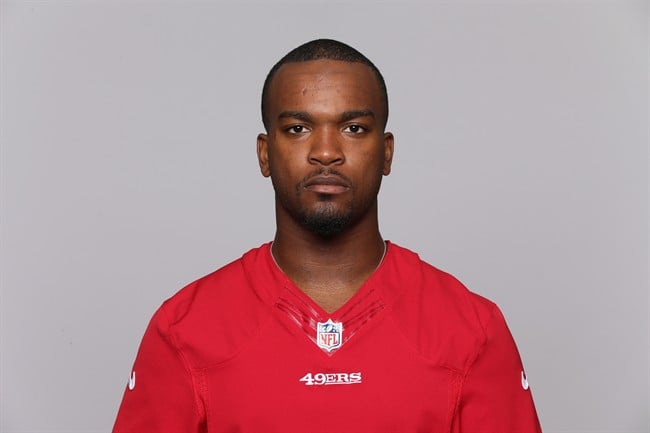 This is a 2015 photo of Mylan Hicks of the San Francisco 49ers NFL football team. The Calgary Stampeders say team member Mylan Hicks died after his “life was taken in act of violence early on Sunday morning.” THE CANADIAN PRESS/AP

CALGARY – Teammates of Calgary Stampeders defensive back Mylan Hicks say they feel like they’ve lost a family member after a fatal shooting outside a Calgary nightclub early Sunday.

Stampeders president and general manager John Hufnagel said several players were at the Marquee Beer Market & Stage after their win Saturday against the Winnipeg Blue Bombers.

“Everyone in the organization is grief stricken, hurting and we all have to heal,” he said.

Police say at about 2:30 a.m. Sunday, police responded to reports of a shooting at the club, where they found a man in his 20s who’d been shot. He was taken to hospital in life-threatening condition and later died.

Three suspects are in custody and an autopsy is expected to be completed on Monday.

Police have not identified the man who was killed.

But the team said in a statement it is devastated by the death of the 23-year-old player in an “act of violence.”

Teammates remembered Hicks as a hard worker who loved to joke around.

Stampeders defensive back Joshua Bell said he saw Hicks as a little brother or a son.

“You lose family but you have family….We’re leaning on each other right now.”

Bell said he didn’t see the shooting take place and doesn’t know why it happened.

“I guess wrong spot, wrong time,” Bell said. “Or mistaken identity, they may have thought he was somebody else — same coloured shirt, something like that.”

Yellow police tape was wrapped around several vehicles outside the bar south of downtown Calgary hours after the shooting. A single white sneaker lay on the sidewalk by the club’s entrance.

Calgary Police Insp. Don Coleman said it appears there was a fight inside the bar before closing time.

“That incident continued outside the bar and escalated to the point that rounds were fired and the victim was struck,” he said.

He said it didn’t seem that the people arrested knew the victim beforehand and it’s not clear whether he was targeted.

“It seems like from preliminary interviews that they may have left that area and then returned on foot.”

Hicks, who signed with the Stampeders in May and was on Calgary’s practice roster, was born in Detroit and played for Michigan State, where he recorded a career-high 19 tackles and four pass break-ups in nine games in his senior year in 2014.

Hicks signed with the NFL’s San Francisco 49ers as an undrafted free agent in May 2015 before being released at the end of training camp.

Hicks hadn’t played a game this season with the Stampeders, who are currently first in the West Division and on a 12-game unbeaten streak.

“Everybody’s talking about when’s the next time we’re going to lose. Last night we had the most devastating loss we could,” said quarterback Bo Levi Mitchell.

Mitchell said the focus should be on Hicks and his family.

“Don’t make this about us and the rest of the season and how we deal with it,” he said.

“We’re going to honour him as much as we can and play for him and his family.”