The two who medalled above Christine Girard failed their doping retests 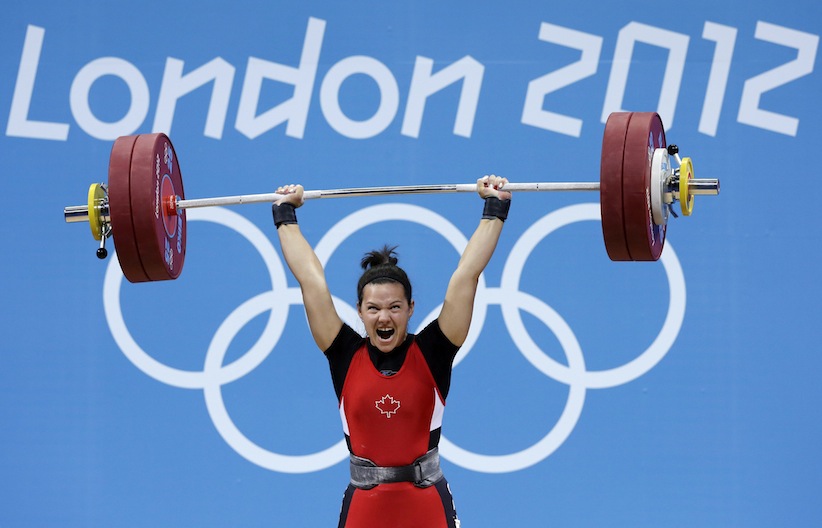 Canadian weightlifter Christine Girard’s bronze medal from the London Olympics could be upgraded to gold after the two women who finished ahead of her were nabbed in doping retests.

The International Weighlifting Federation announced Wednesday that samples of 11 weightlifters from the 2012 Games showed positive results.

Svetlana Tsarukaeva of Russia, who finished second in the women’s 63-kilogram division, was among the 11 athletes. She tested positive for dehydrochlormethyltestosterone, an anabolic steroid.

Gold medallist Maiya Maneza of Kazakhstan was already caught testing positive for stanozolol in an earlier batch of retesting.

“It took some time, but I can now say that my performance in London was the best in the world,” Girard said in French on her Facebook page.

“When I see the amount of positive tests in weightlifting, I am sad to know that so many people thought it impossible to reach this level without cheating,” added Girard.

Medals in London were determined by the sum of each lifter’s best result in the snatch and the clean and jerk, with three attempts allowed in each.

Girard narrowly missed out on silver in 2012, finishing third with a total of 236 kilograms behind Tsarukaeva at 237. Maneza totalled 245 kilograms.

Both Tsarukaeva and Maneza have been provisionally suspended but it would take months, or even years, for a redistribution of Olympic medals.

“These people still have a right to appeal and the right to a second test,” Barrett pointed out.

Girard placed fourth at the 2008 Beijing Olympics. The CWF president said Girard was tested a lot during her career.

“She has been,” Barrett said. “She would have tested at both those Olympics because she was a medallist (in 2012) and she was in fourth place (in 2008).

Barrett said he has not been contacted by either the IWF or the Canadian Olympic Committee about a possible upgrade for Girard.

Women’s weightlifting made its Olympic debut in 2000.

Girard grew up in Rouyn-Noranda, Que., but now lives in the Vancouver area. The 31-year-old is married with children. She and husband Walter Bailey co-founded the Kilophile Weightlifting Club in Surrey, B.C.

Shot-putter Dylan Armstrong of Kamloops, B.C., was upgraded from fourth to the bronze medal almost seven years after the 2008 Beijing Olympics due to doping.

Cross-country skier Beckie Scott of Vermilion, Alta., moved up from bronze to gold two and a half years after the 2002 Winter Games when the medallists ahead of her were caught doping.