At the Tokyo Summer Games next year, Haley and her dad Kimberly could make history. Haley as potentially part of the first group of female Olympic canoeists and her dad as among the first transgender officials. 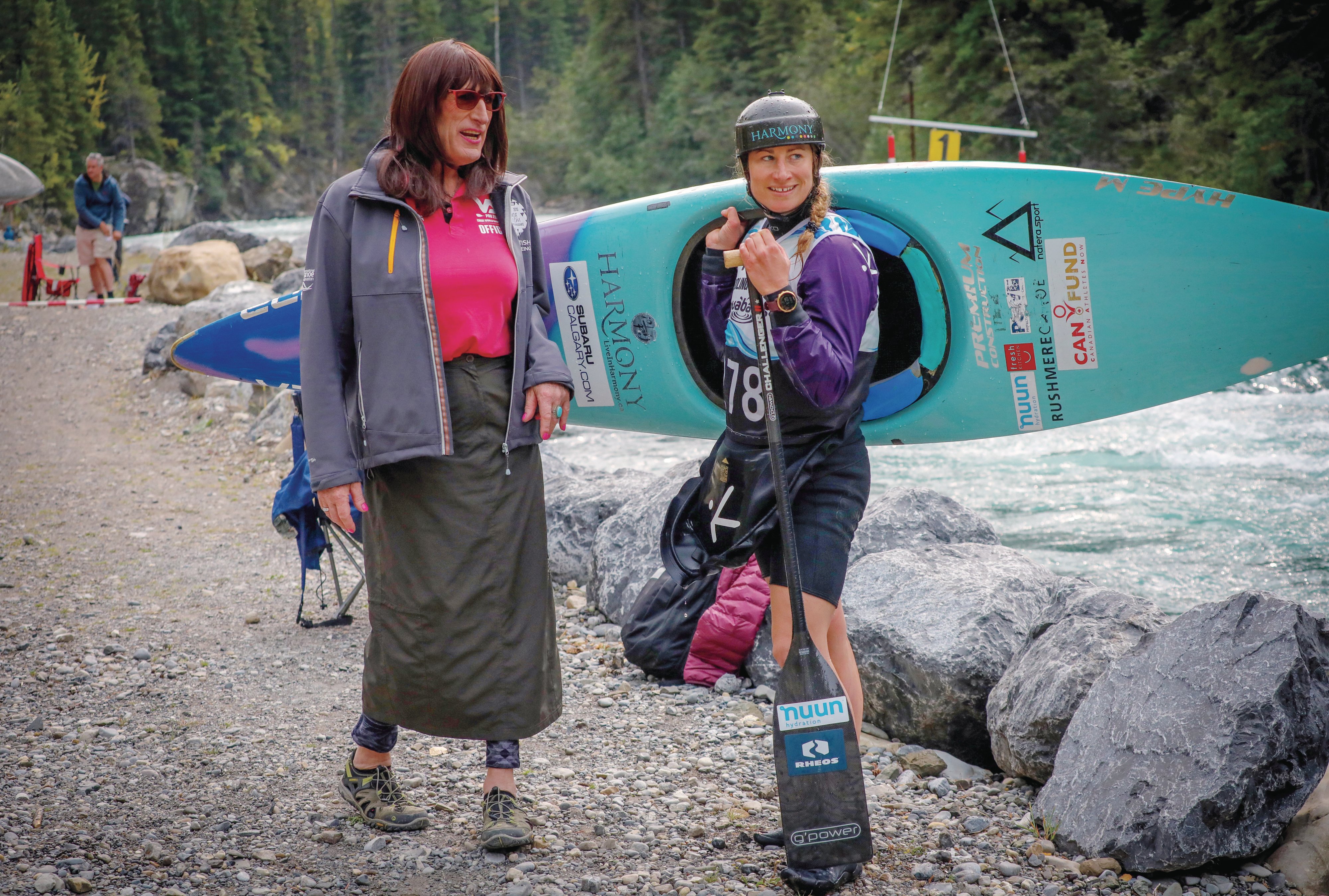 Haley Daniels watched with elation from the medals podium as the Canadian flag was slowly raised, marking her bronze in canoe slalom at the 2015 Pan American Games. This was a career highlight, but her eyes were immediately set further ahead: toward an Olympics—if canoe racing would ever open up to women at a Summer Games.

She recalls shedding tears of joy as soon as she saw her parents after her Pan Am medal finish in Toronto. Her dad, Duncan, served as a canoeing judge at the Games, and would make it to the 2016 Olympics in Rio de Janeiro as a judge. But secretly, that wasn’t the brass ring, or Duncan’s real dream.

Now, the paths of father and daughter are set to converge at the Tokyo Summer Games next year. If she qualifies, Haley will make history as part of the first group of female Olympic canoeists. Her dad will be an accredited judge again, but as Kimberly Daniels, among the first transgender officials in an athletic world that’s begun to open itself up to those who don’t fit within traditional gender roles.

Haley knows that elite athletes, almost more than anybody else, wind up wrapping their families into their journey and their public narratives—so much so that she and Kimberly both refer to when “we came out.” They’d initially planned to do it in the fall after the Tokyo Games, to prevent any public attention from disrupting Haley’s focus. Then the coronavirus postponed the Olympics by a year, and Kimberly’s transition was well under way. So why wait, they asked themselves. Why not shout it from the rooftops, together?

READ: For transgender women, the pay equity gap is even wider

Sports run deep in the Daniels family. Haley’s great-grandfather was an international skeet shooter. Her grandfather won a Grey Cup with the Toronto Argonauts. Her uncle was on the national water polo team, and her dad held junior Canadian swim records. When she was growing up in Calgary, her family hit the Rockies almost every weekend—hiking, skiing, fishing, paddling. Haley loved canoe trips the best. At 14, she took up competitive paddling, opting for whitewater slalom instead of flatwater sprint, the event Canadians have long excelled at. Sprint requires brute strength, she says, while “slalom is very technical—you’re able to use the water [to move forward].” In her event, canoeists must pass through a course of 18 to 23 gates; to reach some of them, they must paddle upstream.

Because elite amateur sports rely on parents filling organizational roles, her father got into canoe judging, the task of ensuring paddlers manoeuvre properly through slalom gates, and assessing penalties for missing them. (An athlete’s relatives are permitted to judge, as a separate video judge is there to catch any nepotism.) It gave her dad a keen sense for Haley’s sport, and she looked to Duncan for counsel and perspective. That advice helped Haley decide to switch early on from kayak slalom to canoe, and in 2012 she picked up her first of several women’s national championships in that event.

But it remained an event with a glass ceiling. Olympic canoeing was a men-only affair. And like other glass ceilings, that came with a financial penalty: Canada wouldn’t fund non-Olympic events, leaving world-class female canoeists like Haley to raise tens of thousands of dollars for training, gear and international travel. For years, she banded together with fellow international athletes to pressure the International Canoe Federation to let women participate. She connected with lawyers who sued to get female ski jumpers into the Olympics, but ultimately balked at launching an acrimonious class action against her own sporting association. Only after the 2016 Summer Games in Rio was her sport finally announced for the Olympics.

So Haley stands to make her Olympic debut at age 30, if she qualifies. She’s competing for a berth against a 22-year-old Canadian teammate who recently remarked to Haley that she’s never known inequality in her sport. “To me, that means we won,” Haley says “She’s our goal. Future generations and people I’m competing against don’t have that adversity when they’re paddling. They can just be athletes instead of having to fight for the gender they’re given.”

Haley’s father remembers ﬁghting against her given gender since the time when, as a young boy, she tried on a swing dress, black with crinolines, and her body flushed with an epiphany. Dressing as a girl made sense, but it felt wrong for a child in a traditional, Christian family in 1960s Winnipeg. Yet that internal voice always lingered, always female. Kimberly recalls every birthday, sitting before lit candles on a cake. “You make a wish that you don’t tell anyone. Right? Well, from age seven to into my 60s, my wish was to be a girl. Every single year.”

The adolescent Duncan found sports, and excelled at several—a great distraction from hidden impulses. Got married, had Haley and younger brother Hayden, thrived in a government job. But at the end of workdays, Haley’s dad would linger on the office computer, using clothes-modelling software, daydreaming about fashionable dresses and skirts. And a couple nights a year, for more than two decades, she’d sneak out to bars or nightclubs to live fleetingly as Kimberly.

About 2½ years ago, Haley’s father and mother separated. That gave Kimberly more room to stop suppressing, and start exploring. She’d go out more often as Kimberly: to gay bars, then neighbourhood pizza parlours, then a seniors’ alpine skiing club. She came out first to her son—but kept it from Haley, worried it would “be so emotionally stressful it [would] start impacting her [athletic] performance,” she recalls. “But there was a point where I went: my life’s changing, here, and I just can’t stop. It was at a point where I needed to share this with her.”

Kimberly did it in October 2018—fall is the start of canoeing’s World Cup off-season, when they normally have an annual debrief. Over spaghetti dinner, father told daughter her secret, and then—that same night—the pair went to drag night at a Calgary gay bar. To Haley, it was initially shocking. She’d never expected it from her rugged, athletic and outdoorsy father, though she’d always been struck by the particular way her dad looked at fingernails. The new reality would take some adjustment: going to a drag show on that first night was “way too much,” Haley recalls, and she urged Kimberly to be more subtle in how she revealed her transgender self. (That marked another transition: the child beginning to coach the parent, after a lifetime of guidance flowing the other way.) 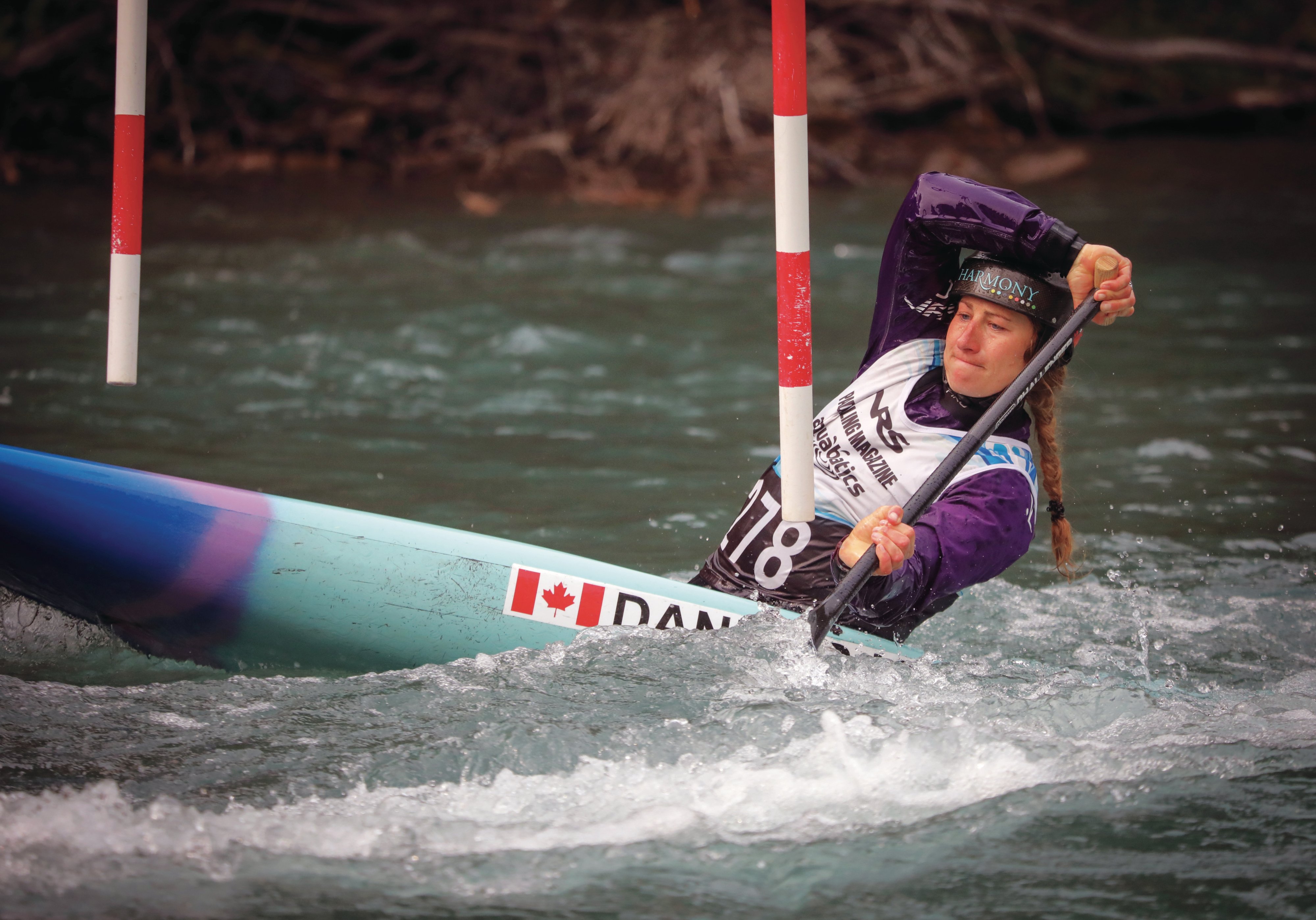 She insisted on something else: that no matter what, Kimberly would remain “Dad” to Haley and her brother. Kimberly started transitional hormone treatments in January, and the pandemic’s work-from-home shift let her dress as a woman as much as she wanted. But virtually nobody knew Duncan was becoming Kimberly. The Olympic postponement cast her initial plans to publicly reveal the change into uncertainty. Then, in the summer, Haley was invited to a Calgary Pride Week photography session for athletes, and she invited her trans dad to tag along. Kimberly posed in a multicoloured blouse beneath a royal blue blazer—her judging jacket from the Rio Summer Games, complete with Olympic crest.

The reaction, they both say, has been overwhelmingly positive. Fellow athletes, judges and corporate sponsors have thanked them, saying it’s been inspiring. In her first months as a transgender woman in Calgary, Kimberly reports not a single bad experience, but for a couple people blurting out “sir.” Kimberly and Haley know there are those who find trans people wrong or deviant. “The great thing is, today it’s not appropriate for them to say anything,” Kimberly says. “It’s something they should keep to themselves, and they are.”

Unlike her daughter, Kimberly’s efforts to get into the Olympics were simple; she had merely to re-register under her new name and submit a new photo for her official’s badge, and her accreditation for Tokyo 2021 followed. Maclean’s consulted international trans and LGBTQ sports advocates and officials with the Canadian Olympic Committee; none was aware of a trans judge at the Olympics at any event. But record-keeping on the question is non-existent, so it’s hard to be definitive. A handful of athletes, meanwhile, appear poised to break the barrier in Tokyo.

At an Olympics likely to be marked by strict social distancing and, possibly, an absence of spectators, having her dad at the water’s edge will have special meaning to Haley, should she qualify. They’d get to celebrate together, even if pandemic rules mean they can’t hug. “We’ve had so many races where Dad’s judging and I’ve had a terrible race, or I’ve had a great race and I just come up and stand on the side of the river. And we’ll just acknowledge each other,” Haley says.

“We’re not trailblazers by choice. It’s just who we are, and the path we’re on,” the daughter goes on. It’s ironic, she observes, that she’s been fighting for gender equality and her dad just switched gender identities.

But something in that unites Haley and Kimberly: the drive and perseverance as they scraped toward the full realization of who they are, of what they knew they could become, given the chance. That, and carefully minding the choppy waters.

This article appears in print in the December 2020 issue of Maclean’s magazine with the headline, “Paddling Against the current.” Subscribe to the monthly print magazine here.