With the 2019 World Cup looming, the Canadian superstar could achieve the 'absolutely impossible' 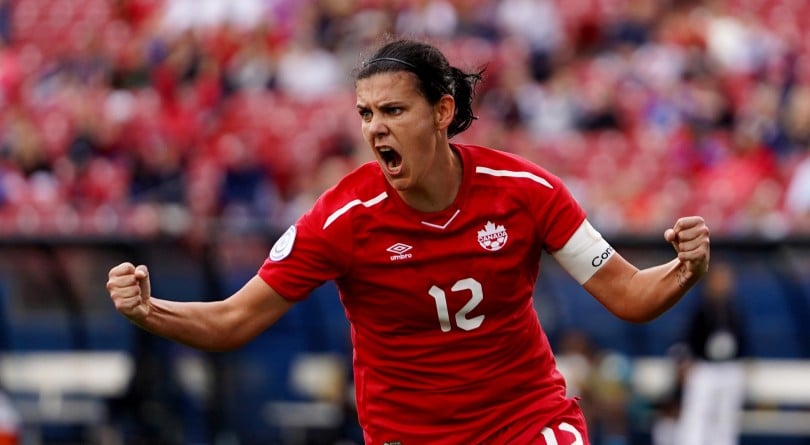 Christine Sinclair doesn’t know the exact number of goals she’s scored for Team Canada. Nor can she tell you how many goals retired striker Abby Wambach scored for Team USA. And yet Sinclair is aware of precisely how many goals she needs to surpass Wambach and become the most prolific goal scorer—man or woman—in the history of international soccer.

“I know I have seven to tie her and eight to pass her because every single person reminds me,” Sinclair says. “This past year, my teammates really started to say that I’m so close. When I’d score, they’d chant, ‘Ten more! Ten more!’ ”

Her teammates appear more eager to see Sinclair atop the record books than Sinclair herself. During a World Cup qualifying match in October, with Canada already leading 10-0 over lowly Cuba, Sinclair found herself with the ball on a two-person breakaway alongside teammate Jordyn Huitema. Rather than go for glory, Sinclair opted for the simple pass to Huitema, who scored on an empty net.

If Sinclair were a more egocentric player, she’d probably already have the record. But her selfless play and team-first attitude has served her well. With 177 goals for Canada so far, she’s within reach of Wambach’s record of 184 as the national side prepares for the 2019 World Cup in France.

Sinclair’s ultimate mission is to help Canada win the World Cup, but breaking the goal-scoring record along the way would be nice, she says. That way, everyone could start focusing on the team’s results. “It would mean a lot [to break the record],” she admits. “ ‘Hey! You’ve scored the most international goals of anyone, ever.’ It’s got a nice ring to it. But it’s never been my focus.”

What Sinclair says she’s most proud of during her soccer career is not her goal-scoring tally, but how Canada’s women’s national team has grown from an afterthought on the international scene to a world power.

The history of Canadian soccer will record that the decision of a kid from Burnaby, B.C., to join the squad while still in high school led to both those triumphs. If all goes as hoped, a crowning achievement will come in 2019.

By his own admission, Even Pellerud knew nothing about Canadian soccer when he was hired to coach the country’s women’s national team in 2000. The Norwegian laments that he didn’t even receive any scouting material on players upon arrival. So Pellerud travelled the country himself, holding practice matches from Vancouver to Toronto. During one such session in Coquitlam, B.C., a teenager playing on the right wing caught his eye within five minutes of the action starting.

“What’s this girl’s name?” Pellerud asked the person on his right.

Pellerud fired back: “I didn’t ask for her age. What’s her name?”

Pellerud recounts what turned out to be the most important five minutes of scouting in Canadian soccer history: he informed his staff that Sinclair would be suiting up for the 2000 Algarve Cup in Portugal—the biggest tournament in international women’s soccer outside of the Olympics and the World Cup. “I remember the first time she came out to practise with us,” says Karina LeBlanc, a retired goalie for Team Canada. During one scrimmage, Sinclair received a pass at the edge of the six-yard box and, very calmly, put the ball past the goalie and into the corner of the net. “Usually young kids would just hammer that ball, which is sometimes easier for a goalie to throw her body in front of. She had the composure of a veteran.”

After a 4-0 loss to China in Canada’s first Algarve Cup game, Sinclair was in the starting lineup for the second game against Norway, her coach’s home country, whose team had reached the semifinals at the previous year’s World Cup. Less than 10 minutes into the match, after Norway lost the ball, a 16-year-old Sinclair found herself on a breakaway against Bente Nordby, one of the best goalkeepers in the world at the time. “I just slotted it far post and was completely overwhelmed,” Sinclair says of her first goal in a Team Canada uniform. “I don’t remember my celebration. I probably just ran around.”

Canada lost that game 2-1, but the team ended the tournament on a high note with wins over Finland and Denmark, and Sinclair scored twice more. In her first year with the squad, Sinclair had amassed 15 goals for her country.

After her second full year on the national team—with fewer major tournaments, and thus fewer games—Sinclair added six goals to her total. Sinclair says that was the first time she took a peek at record books, even though she didn’t have to guess the all-time leader in international goals; she’d played against Mia Hamm twice that summer. The formidable Hamm, Sinclair remembers, held the record at the time with 127 international goals. “I thought, ‘That is absolutely impossible.’ ”

Sinclair has a straightforward objective for 2019: win the World Cup. But rewind 20 years, she says, and watching Canada at the 1999 World Cup was a turning point—the moment she decided she was going to make a career of soccer. Canada didn’t get a single win at that World Cup, and they were routed by both Norway and Russia in the group stages.

Sinclair has been on the pitch for some of Canada’s biggest growing pains since then—when they were steamrolled by the U.S. 9-1 in 2000, hammered by the Norwegians 9-1 in 2001 and thrashed by the Brazilians 7-0 in 2007.

Fast-forward to the present day and FIFA ranks Canada’s women as the fifth-best team in the world, while Brazil is now seventh and Norway has fallen to 13th. Beating America on the biggest stage is the next major hurdle, though they’ve already come close: at the 2012 Olympic Games, the Americans trailed Canada on three separate occasions—thanks to a Sinclair hat trick—until the U.S. tied the game late and prevailed 4-3 in extra time. Canada has since won back-to-back Olympic bronze medals.

“I’m Swedish, so as coach of the U.S., this rivalry was pretty new for me—that you have to beat Canada,” says Pia Sundhage, the coach of America’s 2012 Olympic gold-winning team. “The first thing we talked about, of course, was Sinclair.”

While Sundhage’s team played zonal defence, “we always tried to double-team [Sinclair] when she received the ball,” she says. “She’s not only a goal scorer—even though she scored a lot of goals—but can make the final pass to somebody else. She’s hard to defend.”

No wonder Sinclair has 11 career goals against the perennial powerhouse Americans. “I’ve said for a long time that I believe, in my humble opinion, that Christine Sinclair is the best player in the world,” said Hope Solo, the legendary U.S. goalkeeper, in 2014. “She reads the game, she passes, she gets assists and she’s dangerous every time she gets the ball . . . I’ve looked up to her and I’ve admired her as a player for a really long time.”

Hamm finished her career with 158 goals; Sinclair surpassed that in 2016. By then, the new all-time record belonged to American Abby Wambach, whose career ran alongside Sinclair’s until she retired in 2015 with 184 international goals.

“Canada hasn’t won the World Cup or the Olympics,” says Canada’s current women’s national coach Kenneth Heiner-Moller. “They don’t get the huge blowout wins like the U.S. did with Wambach, who had a lot of these 10-0 games. That says something about [Sinclair’s] goal-scoring ability.” In short: Sinclair reached her goal count largely in more even games, rather than having the luxury of frequently running up the score on overmatched opponents.

Along the way, Sinclair’s been shortlisted for FIFA World Player of the Year seven times, most recently in 2016—though she’s never won the prestigious award. Not that she’d brag about it. When she found out she’d been awarded the Order of Canada, she didn’t even mention it to her closest teammates. “You’d think she’d share that with us,” LeBlanc says. “We found out via the media.”

Teammates are happy to share their favourite memories of Sinclair—especially their favourite goals. Former Canada women’s coach John Herdman’s pick was the first strike of Sinclair’s hat trick at the 2012 Olympics, even if the match ended in a heartbreaking loss for Canada. With the score tied 0-0, she collected the ball and, rather than rush a shot, easily sidestepped a defender and placed the ball in the lower left corner—as calmly as a teenager in her first practice with the national team, albeit with infinitely higher stakes. Diana Matheson, one of two players to play more than 200 times for Canada (the other being, yes, Sinclair), mentions a 2010 tournament-winning goal Sinclair scored with less than 10 minutes left in the finals—a left-footed curler from just outside the 18-yard box, top corner post and in. “A banger against Brazil,” Sinclair recalls.

Heiner-Moller predicts that his favourite memory of Sinclair is to come this summer. Eight goals in a single year is no easy task—but it’s possible for someone as prolific as Sinclair. Adds Herdman, who now coaches Canada’s men: “We want her to be remembered as the best ever, so Canada can say, ‘We produced that.’ And because we produced her, we can produce more players like her.”

Women’s international soccer has improved leaps and bounds over the past two decades; blowout wins are increasingly rare. Which means, Heiner-Moller adds, that once Sinclair becomes the all-time goal-scoring record holder, “it might just be a record that stands forever.”