Chuba Hubbard, football phenom from Canada, gets results on race

Image of the Week: Not long ago, teeing off on his coach over a racially charged photo might have derailed the career of a young running back. This time, it was the coach scrambling to keep his job. 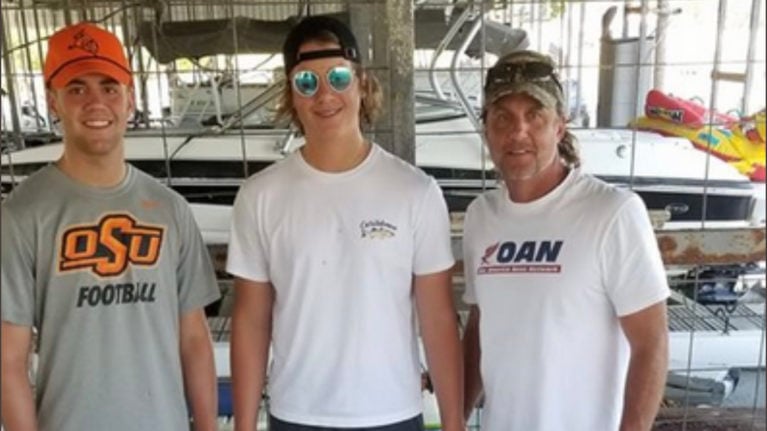 It is fair to assume that football coach Mike Gundy—Oklahoma born and bred; boasts about his million-dollar mullet; alliteratively named his three sons Gavin, Gunnar and Gage; slamming players who transfer as entitled Gen Z snowflakes—does not love the mainstream media and liberal politicians. So when an image appeared online of the Oklahoma State University coach wearing a T-shirt with the logo from the far-right conspiratorial Trump fan channel One America News Network, it didn’t spark too much controversy. That is, until Gundy’s Edmonton-born star running back, Chuba Hubbard, saw it. “I will not stand for this,” Hubbard wrote in a tweet that has since garnered nearly 140,000 likes. “This is completely insensitive to everything going on in society, and it’s unacceptable. I will not be doing anything with Oklahoma State until things CHANGE.” Hubbard, a first-round draft pick in 2021, quickly received support from his teammate and fellow Albertan, Amen Ogbongbemiga, and others soon followed. But then something unusual happened. Instead of exploding into a battle of political ideologies, the temperature of things went down 24 hours later, when Hubbard posted a video of himself and Gundy to social media. Gundy had promised to change, and talk about this with Black players; Hubbard apologized for turning to Twitter first. On the surface, it seems like the perfect all-American story: two men, Black and white, shaking hands and promising to do better, all in the name of football. But can a man like Gundy really change his longstanding political views in 24 hours? Or will he just stop voicing them in public? At the very least, he might want to throw away that shirt.