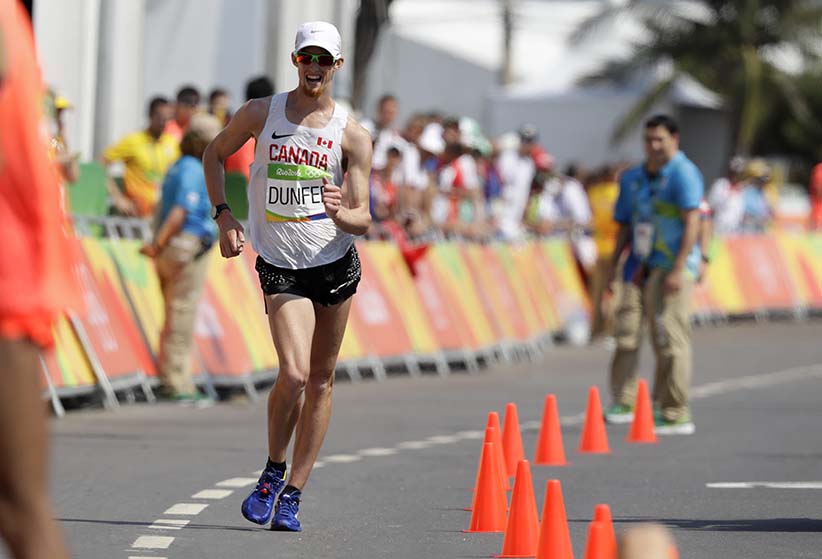 When Evan Dunfee was dropped by his shoe sponsor shortly before Christmas in 2016, the race walker, who captured the attention of Canadians when he opted not to protest his fourth-place finish in the 50K at the Rio Olympics, set out to find himself a new shoe deal.

After a month with no luck, the 26-year-old from Richmond, B.C., tweeted out a photo of his worn-out running shoes.

“When you’re no longer getting shoes for free you come to realize that you’d like them to last longer than two weeks,” he wrote. “What are some good shoes?”

The Canadian Press picked up the story, and within 12 hours, Dunfee had offers from five different sponsors. The experience highlights what Dunfee says is a necessary aspect of the typical amateur athlete’s life in Canada.

“You have to be social-media savvy to really bring in sponsors, and I think that’s just the way it goes,” says Dunfee. “You just have to accept that and learn to keep up.”

In Canada, amateur athletes can’t rely on government funding alone to make a living, making corporate sponsorship a vital means of support. But this leads to the question: Are we doing enough to support our athletes?

In a recent survey for The Canada Project, a randomly selected group was asked whether the federal government spends too much, too little, or about the right amount of money supporting Canadian athletes training for the Olympic Games. Thirty-one per cent of those polled said we don’t spend enough, while 38 per cent said we spend the right amount; 11 per cent felt we spend too much, and 20 per cent were unsure.

Canada’s top amateur athletes receive funding from Sport Canada through the Athletes Assistance Program. Senior athletes receive $1,500 per month in “carding” money, while development athletes, and athletes in their first senior year receive $900. In March, the federal government committed an additional $5 million per year to AAP for the next five years, and it’s expected that the carding payouts will increase by 18 per cent — the first increase since 2004 — though the precise amount isn’t clear, since AAP money is also used to provide funding for things like athletes’ tuition at Canadian universities.

While the carding stipend is relatively low, Dunfee sees the program as an athlete’s first step en route to a full-time career.

“Carding is not the be-all, end-all,” he says. “It sort of gets you in the door. It allows you to be an athlete. But to really make a living off of it, you have to leverage your success in different avenues.”

But while carding money is meant to cover things like housing and groceries, many athletes end up using their monthly cheque to pay for training costs. Sporting federations in Canada are funded through Own the Podium, which uses a medal-targeting approach. Dunfee, for example, has access to funds from Athletics Canada that can be drawn on for expenses such as training camps, physiotherapy and travel. Other sports may receive little to no funding.

“Very few athletes get to use that carding money as a living allowance, which is unfortunate,” says Dunfee.

For swimmer Hilary Caldwell, who won a bronze medal in the 200-metre backstroke at the Rio Olympics, the issue with Canada’s funding system isn’t the medal-targeted approach, but rather the fixed amount of carding money available to athletes. Caldwell, 26, would rather see a tiered system, which countries such as Australia employ.

Part of the problem, according to Caldwell, stems from the notion of so-called “amateur” athletes.

“My parents have friends who ask, ‘What does Hilary do for work?’ Or, ‘What does she do to make money?’ And they kind of look at them and say, ‘Well, she swims. My daughter is an Olympic medallist. It’s her job.’ And people are surprised that I make money. And I’m like, ‘Are you surprised that Serena Williams makes money?’ You talk about people at the top of their sport and it’s totally normal that a soccer player or a tennis player or a basketball player makes millions, but they begrudge me my $20,000 a year? And so it’s this attitude that I think needs to change.”

Caldwell also points out that many athletes in Canada have a hard time just making ends meet.

“You’ve got a lot of athletes living well below the poverty line,” she says. “It is what it is, and you hopefully make other money through prize money and sponsors and other private funding, but really, with Olympic sport in Canada, most sports are not high profile enough, so you’re not getting a ton of private sponsors.”

Caldwell earned $10,000 from the Canadian Olympic Committee for her bronze-medal performance in Rio, but she says there wasn’t much of an uptick in interest from corporate sponsors. The reason might boil down to narrative.

While Dunfee’s unique story elevated his name to the headlines despite his lack of a podium finish, Caldwell was part of a swim team that took home six medals, with teenager Penny Oleksiak taking home four all on her own.

“I’m sure Penny got a lot more offers than I did after the Olympics,” Caldwell says, laughing. “And rightly so.”

Bottom line, Caldwell says, “I think we should fund our athletes better. I think as athletes we are role models. I talk to young swimmers, I go into schools, and we hope to inspire a future generation to be fit, healthy, active people, and maybe be athletes, maybe not.”