With Donald Trump’s travel ban at the forefront of everyone’s minds, prominent figures in the world of sports are speaking out more than any time in recent history 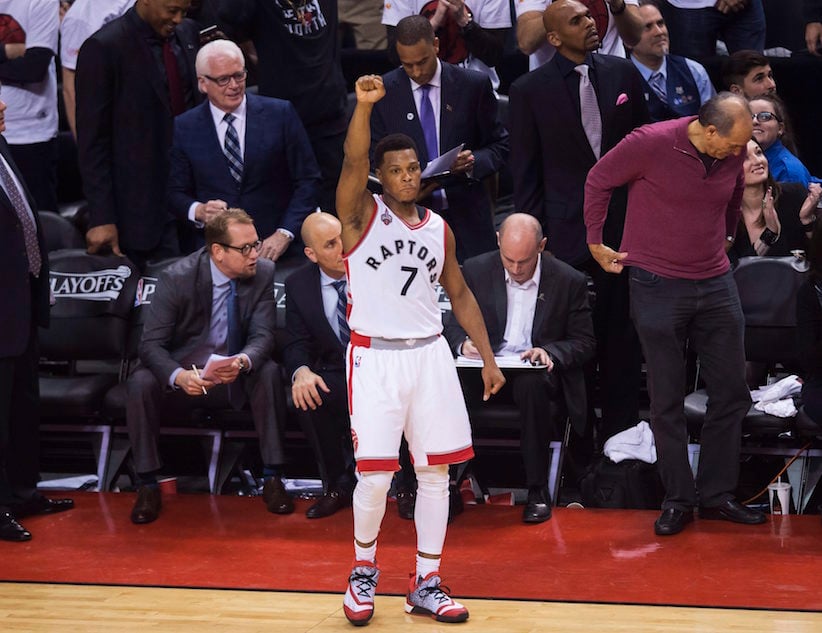 Toronto Raptors guard Kyle Lowry (7) reacts from the bench in the final minute of the game while playing against the Miami Heat during second half round two NBA basketball playoff action in Toronto on Sunday, May 15, 2016. The Raptors beat the Heat 116-89 to win the series in seven games. THE CANADIAN PRESS/Nathan Denette

This story first appeared at Sportsnet.

If you ever wanted to hear what athletes think about sensitive political issues, the kind of hot-button topics that commonly would have been no-go zones even a few months ago, this is a golden era.

However the fast-moving policy train that is the Donald Trump presidency ultimately shakes out — and whatever you think about it — at the very least we will likely have a greater insight into how many prominent sports figures think and what they stand for than at any time in recent sports history.

In Toronto, with the news of the fatal shooting of six worshippers by a terrorist at a mosque outside Quebec City thick in the air, politics never seemed so personal.

RELATED: Toronto Raptors take a stand before a pre-season game

Typically, Toronto Raptors guard Kyle Lowry is strategically vanilla when he addresses the media. Long, drawn out chitchats aren’t his thing. That takes precious time and Lowry tends to be an “on-with-the-next-thing” guy.

But as the world — and sports’ corner of it — tries to absorb what a Trump presidency means now and in the near future, Lowry couldn’t have been clearer about his views on the U.S. travel ban on citizens of seven Muslim-majority nations.

Someone hoping to air his views on television asked if Lowry would share is view but without swearing.

“No, not at all,” the 11-year veteran and gold medallist with the U.S. Olympic team said. “Y’all have to bleep that out. That’s how I feel about it. If you use it, you use it. I’m sure you can bleep it out.

“It’s a real bad situation. It makes the country — I bleed red, white, and blue. I was born and raised there. I have always been taught to treat everyone the same. It’s a difficult time for my country right now and it’s sad.”

Raptors president Masai Ujiri, who came to the U.S. on a student visa from Nigeria, has devoted his time outside of the team and his family to building up his Giants of Africa foundation. The aim is to use basketball to reach young people in a number of African countries, often with a goal of bringing otherwise unidentified talent to the U.S. for school.

He is in the midst of planning a camp in Sudan for the first time. Several players from the East African country have made it to the NBA, including Los Angeles Lakers veteran Luol Deng and rookie Thon Maker of the Milwaukee Bucks, who played high school basketball outside Toronto last year.

Sudan is one of the seven predominantly Muslim countries in Africa and the Middle East named in Trump’s travel ban.

“I’m finding it difficult to absorb some of this stuff from the ban to everything that’s going on,” said Ujiri, visibly upset. “Being someone who travels around the world, you meet a lot of people, especially youth that I deal with and work with around the world. I think it’s just ridiculous what’s going on out there.

“We had planned to do a basketball camp in Sudan. When you go and do those things or even in [the NBA program] Basketball Without Borders we have kids that come from all over the world. What does that mean? Are we lying to those kids when we say we are giving them hope or teaching them or going to help them grow or give them opportunity? We’re outright lying to them now. I just don’t get it. It’s mind-boggling. I just don’t get it.

“Luol Deng ate in my house when he came to play us here. He’s from Sudan. What does all this mean?

“It’s ridiculous in my opinion.”