For want of a shoe, the biggest star in college basketball was lost

Image of the Week: Duke star Zion Williamson is injured when his Nike blows out, exposing the smelly insole of his sport's relationship with shoe companies 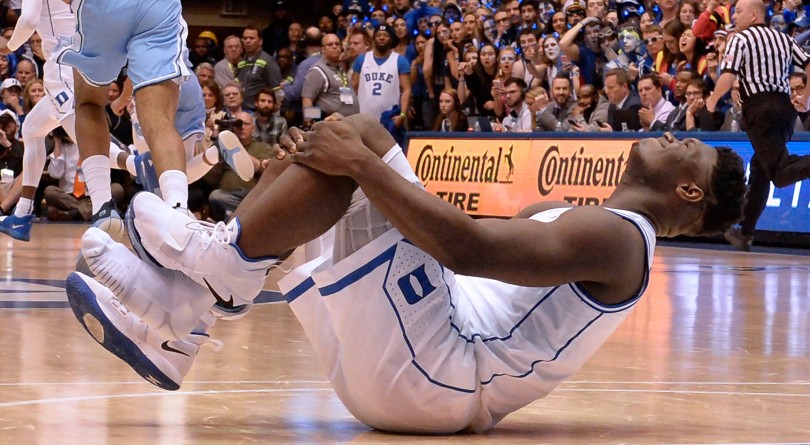 If you don’t follow NCAA basketball, you may never have heard of Zion Williamson. But even then, you might’ve seen him. The 18-year-old wunderkind has found viral fame this past year for his astounding dunks and epic leaps—the stuff sports gifs were made for—that launched him to the top of the NBA’s draft-pick list. Experts agree he’s one of the most exciting prospects to come around in years. So when, 33 seconds into a big game the night of Feb. 20, Williamson’s left foot shot straight through his Nike shoe, spraining his knee and foreshadowing his team’s eventual loss, it was bad news for everybody. For Nike: those shoes retail at around $100, and this PR nightmare ranks worse than the nastiest online review they could imagine. For the NCAA: people are now seriously asking why college players receive zero financial compensation for their efforts, despite being the engines of a billion-dollar industry. (Nike alone doles out eight-figure sums to colleges in exclusive sponsorship apparel contracts.) For Williamson’s school, Duke University: they lost the game, and may lose Williamson forever. Which leads to the worst news of all, and it falls squarely on Williamson himself: while nursing his knee back to full strength, the teen must now choose between sticking with his top-ranked team into March Madness—a once-in-a-lifetime opportunity for which he, his teammates and his coaches were doubtlessly excited, but which would net him zero dollars—and quitting college basketball altogether, preserving his health for an inevitable multimillion-dollar NBA contract this June. It’s a crappy choice for any kid, and crappier still when the whole world is watching.