Fan cutouts are a novelty everywhere but in the Blue Jays’ temporary home in Buffalo, where you might have seen them before—even if you didn't know it at the time 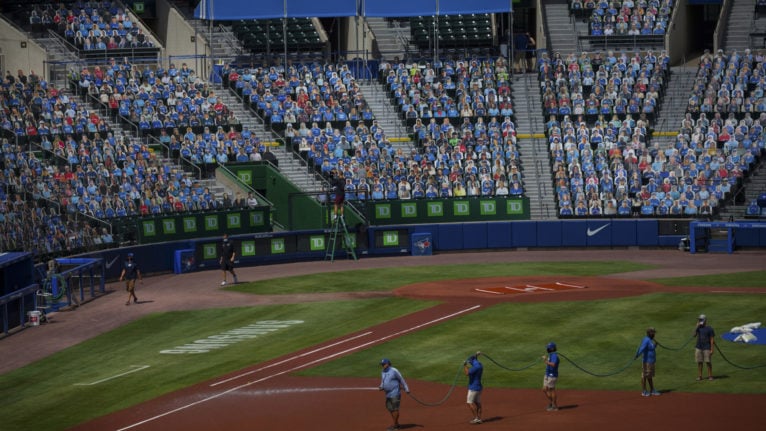 Ground crews prepare Buffalo’s Sahlen Field in front of cardboard Blue Jays fans who paid $60 each for their likenesses to appear in the stands (Michael F. McElroy)

It was mostly cardboard cutouts, hundreds of stand-ins for in-the-flesh fans, who watched a game-winning home run sail over the centre-field wall to cap the home team’s most dramatic win of the season. The old ballpark in rust-belt Buffalo, N.Y., that played host to the walk-off dinger had been empty all year. But inanimate fans filled the void, their expressions frozen in silent admiration.

That was the scene on Aug. 28 when Toronto Blue Jays outfielder Randal Grichuk slammed a hanging slider more than 400 feet to straightaway centre—a no-doubter that sealed the extra-inning victory over the visiting Baltimore Orioles. The Jays, prevented from playing at Toronto’s Rogers Centre for the summer by federal public health officials who wouldn’t issue a cross-border travel exemption, were making the best of things at Buffalo’s Sahlen Field, the home of their top minor-league affiliate. It was the only stadium that would take them.

Like most major league teams, the club had filled its temporary home’s lower bowl with life-sized fan cutouts, available to partisans for $60 apiece. The first tranche sold out in a day, and the full complement eventually numbered 2,857, with proceeds going to the Jays Care Foundation.

But as the quirky promotion was taking the league by storm, the use of two-dimensional stand-ins no doubt stirred memories among Buffalonians of a certain age: cardboard spectators, after all, had filled the seats of a ballpark in the city once before. And though few likely know it, nostalgic baseball fans around the world have seen them.

These are the ersatz fans looking on when aging slugger Roy Hobbs steps into the batter’s box in the 1984 baseball classic The Natural. In the bottom of the ninth inning of a one-game playoff home game between his New York Knights and the visiting Pittsburgh Pirates, Hobbs secures the 1939 National League pennant with a towering homer that smashes the stadium’s light standards and—in an infamously sentimental flourish—rains explosive fireworks all over the field as he circles the bases.

The scene was filmed at Buffalo’s old War Memorial Stadium, an old-timey park nicknamed the Rockpile that was demolished only a few years later.

The film’s producers could only recruit so many extras to fill the bleachers, so they turned to cardboard cutouts, 36 inches tall and tethered to the seats, which featured locals dressed up in period garb. The movie was a hit, and the cutouts became instant collectors’ items. Paul Ferrante, a sports writer and gatherer of memorabilia, nabbed two himself. “I remember them fondly. I think I paid about a hundred bucks for the pair,” he says from his home in Connecticut. Then reality set in: “As cool as they are, what do you do with them?”

Ferrante eventually off-loaded his fan effigies to an auction house in Pennsylvania. Their current whereabouts are unknown, but collectors can often find cutouts used in the movie on eBay. This summer, the opening bid for a pair was US$125. 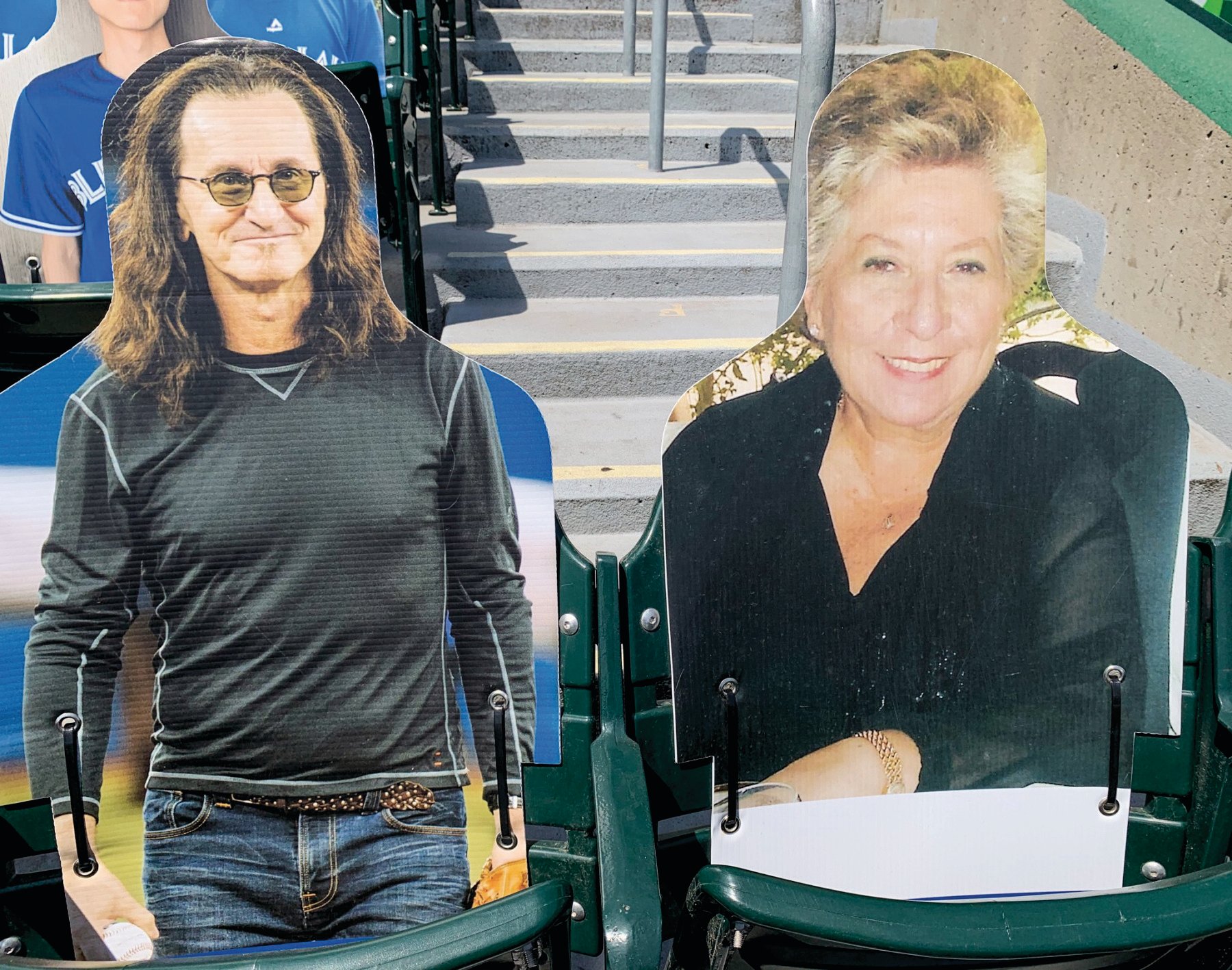 Jays fans who bought cutouts will receive their likenesses at the end of the year. The team had honoured certain superfans by placing their two-dimensional selves right behind home plate, which is how a familiar face, Rush frontman Geddy Lee, scored a little extra limelight. The club seated Lee, whose likeness captures the moment he threw a ceremonial first pitch in 2013, right next to New York Governor Andrew Cuomo. A nearby woman known to hardcore fans only as “Home Plate Lady” is, in a manner of speaking, just where they remembered her.

Lee is a long-time Jays season-ticket holder whose baseball fandom stretches back to his Toronto childhood. “I was a terrible skater. I never really made the grade as a hockey kid,” he tells Maclean’s. Instead, Lee watched the Toronto Maple Leafs baseball team—a top minor-league squad at the time that now plays semi-pro—and traded cards with his friends. Eventually, he let the sport go, but reconnected with it years later when Rush was enduring gruelling arena tours.

“I would wake up in a Holiday Inn in Iowa, or wherever, and beg the kitchen to send me up some scrambled eggs,” he recalls. “You could almost always find a game to watch [on TV] while eating your breakfast before you became functional and went down to the gig to do your sound check.”

As he gained rock superstardom, Lee’s baseball fandom approached cult proportions. He’s known for a serious memorabilia collection, including a signed baseball from all 32 players who’ve racked up 3,000 hits in their careers.

When The Natural was in theatres, Lee was in the middle of an American tour. He recalls sitting in the second row of a Wichita Aeros minor-league game on June 14, 1984. Rush was in town for a show the next day, and a fireballer named Brad “the Animal” Lesley dedicated a strikeout to Lee—“This one’s for the Necromancer,” the pitcher barked from the mound, referencing one of the band’s prog-rock epics. Lesley whiffed the batter and won the game.

Rush moved on to Kansas City for its next show, and after the season, the Aeros left the Midwest for new digs: in 1985, they became the Buffalo Bisons, the Blue Jays’ farm club that now plays at Sahlen Field.

“Baseball loves its myths,” observes Lee, whose likeness witnessed his hometown Jays clinch an unexpected playoff spot on a chilly September night. They had managed to topple the fearsome Yankees, Ferrante’s favourite team. The collector only chuckled when he heard cardboard was once again in vogue in Buffalo. “I thought of The Natural immediately,” he says. “What’s old is new again.”

This article appears in print in the November 2020 issue of Maclean’s magazine with the headline, “A ‘Natural’-born ball crowd.” Subscribe to the monthly print magazine here.