'It just brings us all, as a society, that much closer together' 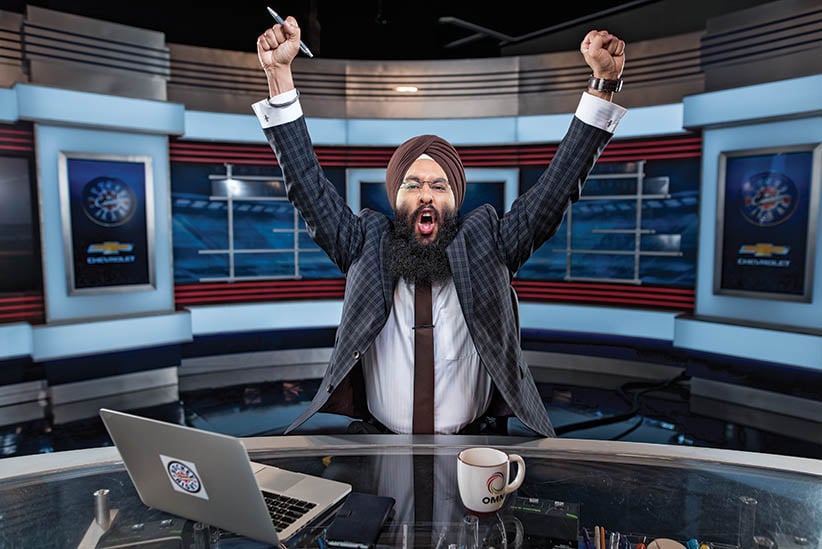 Harnarayan Singh’s first job in journalism was as a summer festival reporter for CBC Radio in 2003. He began calling games for Hockey Night in Canada: Punjabi in 2008. He lives in Calgary with his wife and daughter.

Q How did you initially get into hockey?
A: My older siblings were already watching it, and I would always get mini-sticks or NHL team attire as gifts when I was a kid. We would always watch the games together as a family.

Growing up in Brooks, a small-town in southern Alberta, hockey really helped my experience at school. I was conscious of the fact I looked different and I felt wearing hockey sweaters, it initiated a conversation. My projects, my essays were all about hockey, and it helped create a rapport with classmates and teachers. I even remember having a few friendly wagers with teachers about games and eventually taking part in hockey pools. We used to have jersey days at school and people would ask me which one from my collection I would choose because I wore them so often anyway.

It’s cool that what hockey did for me as a kid back in the ’80s, it’s still doing for students today. My wife, Sukhjeet Kaur, is a Grade 3 teacher in Calgary. Her class is full of visible minorities and hockey is the dominant topic. The kids always talk about last night’s Flames game. Having a team and a player to cheer for is something she uses in her teaching, whether it’s using hockey as an incentive for the kids to read more books or using stats in mathematics problems.

The kids love it; they’re so passionate. Hockey provides that common ground for them to have conversations with each other. That’s what hockey is for Canada; that universal language. I talk about the 2010 Olympics a lot. The majority of our country was sitting there watching that gold medal game. When Sidney Crosby scored the golden goal, I doubt there was ever a more diverse cheering squad for any other team or sport in the world.

Q: It seems like Canadian pride comes naturally to you.
A: I’ve always been very patriotic. Even when I was in elementary school, my bedroom had a Canadian flag hanging in the window. I’ve always worn it on my sleeve. We were lucky enough to travel a lot growing up and I always had a Canada T-shirt on or the flag sewn on my bag. I really value the Canadian characteristics of being kind, humble, but fun, too.

I really feel many of the opportunities I’ve been given and having the chance to make my dream come true wouldn’t have been possible in any other country. That’s what makes Canada so great; these opportunities are available to anyone, regardless of who you are.

My great-grandfather came to Canada over 100 years ago and it’s such a night-and-day difference between the situation now and then. Back then, the federal government was instituting policies that were directly aimed at creating a white Canada. Now, you can have a member of parliament from any type of background or a guy like me on television with a beard and a turban talking about Canada’s favourite sport.

Q: How was the experience of hosting three national games for Sportsnet this past season?
A: I received great feedback from people, whether on social media or just walking in the street. I think having someone like myself on the mainstream English side, it breaks down even more barriers. Someone who had never met a Sikh before could see, “OK, this guy is just as Canadian as I am. He loves hockey and can speak the English language just as well.”

I think it just brings us all, as a society, that much closer together.

Q: Where do you see hockey having an impact on people beyond the realm of an actual game?
A: The last few years we, as a family, have celebrated Canada Day by volunteering with other members of the Sikh community by tying red and white turbans in Calgary at Prince’s Island Park. It’s a great thing for community engagement and it’s a great way for us to show our Canadian pride. We’ll often get a few thousand people wearing red and white turbans downtown. We’re inviting a lot of new people to our country and I feel passionate about helping them integrate into our society. Sports is a great way to do that and invite people to learn about our culture and language.

Bringing people to a hockey rink for the first time is something I love to do and I’ve been involved in the NHL’s Hockey is for Everyone program for a couple years. We introduce people to the game by teaching them about the rules, giving them a chance to watch a practice, ask questions and even feel the equipment. You should see their face when they do that. There’s also a charity I volunteer with called HEROS Hockey, which uses the game to teach life skills to marginalized youth and empower them. There are a lot of really cool ways hockey can help Canadians and I would say even more ways than it helped me growing up. That’s the beauty of the sport.