The rules for voting on the winning host have changed, and the president’s antics aren’t doing any favours for the joint North American bid 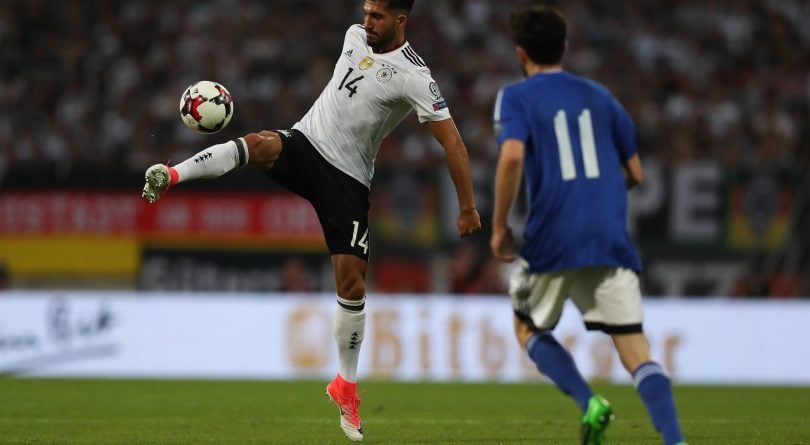 Emre Can of Germany and Tommaso Zafferani of San Marino battle for the ball during the FIFA 2018 World Cup Qualifier between Germany and San Marino on June 10, 2017 in Nuremberg, Bavaria. (Maja Hitij/Bongarts/Getty Images)

Sports is politics, and politics is sports.

That won’t sit well with the “stick to sports” crowd who would just as soon see politics completely divorced from sports. But the truth is that politics is naturally infused into our everyday lives—be it in cultural, social or economic matters—that it would be silly to expect politics and sports never to intersect with one another.

The sobering reality that the two are forever and inextricably intertwined appears to be completely lost on top soccer officials from Canada, Mexico and the United States who have mounted a joint effort, officially known as the “United Bid,” in opposition to Morocco in an attempt to win the rights to host the 2026 FIFA World Cup.

The three co-chairs of the United Bid—Canada Soccer president Steven Reed, United States Soccer Federation president Carlos Cordeiro and Mexican Football Federation president Decio De Maria—were in full “spin mode” during a teleconference with reporters on Monday morning, insisting that the two competing bids will be judged solely on their merits, and nothing else.

That didn’t stop several journalists from pressing them about the unmistakably growing anti-U.S. sentiment around the world, and how the contentious policies of President Donald Trump could taint their bid when it comes time for voting nations to pick a World Cup host. The co-chairmen deftly deflected those queries, while simultaneously touting what it sees as the three core strengths of the United Bid: “the power of unity, the promise of certainty, and the potential for great opportunity.”

That’s a lovely sentiment, but it’s beyond naïve to think that politics won’t play a part when voting members gather in Russia on June 13 to select a host for the 2026 World Cup. More than ever, the voting process is politicized, as each member nation of FIFA has an equal say.

Whereas only FIFA’s 24-member executive board voted for the hosts of the 2018 and 2022 tournaments (which went to Russia and Qatar, respectively), this time around FIFA’s entire membership will get to vote on the host for the 2026 competition. It’s important to note that the bidding nations can’t vote (Guatemala is also suspended from voting), which means the winning bid needs 104 votes out of the 206 FIFA member countries who will cast a ballot.

The math is pretty simple here. The Confederation of African Football has 55 member nations. It’s difficult to imagine that many of them won’t vote for Morocco, and thus choose to spurn a glorious opportunity to bring the world’s biggest sporting spectacle back to the continent for the first time since South Africa hosted the World Cup in 2010. Assuming the African nations overwhelmingly vote as one, which seems a safe bet, Morocco would be halfway home, and have a clear pathway to victory over the United Bid.

That the African nations would vote as a unified bloc shouldn’t come as too much of a surprise considering Morocco is one of the options. But the CAF nations voting simply out of African pride has become even more of a problem for the United Bid in light of who is currently occupying the White House.

We shouldn’t underestimate how Donald Trump’s infamous comments about some African nations being “s—hole countries” will hurt the United Bid’s chances. Also, Trump’s signing of an executive order last year that halted all refugee admissions and temporarily barred people from eight Muslim-majority countries has done the United Bid no favours, especially when you consider three of those nations are in Africa: Chad, Libya, and Somalia.

Now, the travel ban could still be struck down by the Supreme Court as being unconstitutional, so it might not even be an issue in 2026. But the vote isn’t taking place in 2026; it’s happening this summer, and Trump’s attempt to ban people from certain countries from entering the U.S. won’t play well amongst nations from Africa and the Muslim world when they gather for the vote in Russia.

You can be sure that the “Trump factor” will come into play, as much as Cordeiro says it won’t. When asked if the policies of the American president and the international perception of the U.S. at the moment is hurting the bid, the USSF president said Monday: “This is not geopolitics, we’re talking about football.”

He later added: “We believe strongly that this decision will be made on its merits.” If only it were that simple.

You could certainly understand why African nations would be inclined to vote for Morocco. But UEFA countries might also favour Morocco, as match times would be more ideal for TV viewers across Europe. European media and television companies have paid huge rights fees to televise the World Cup, and will be looking to maximize profits. They can’t do that unless games are played in prime time.

Africa’s proximity to Europe will also make it much easier for travelling European fans to attend the 2026 World Cup, another factor that could lead European nations to vote simply out of self-interest, and pick Morocco.

Still, Cordeiro insists nations will decide on a World Cup host based on “what’s in the best interest of football and our footballing community.”

Time will tell on that score, but he’s putting an awful lot of faith in the 206 people from around the world, many from diverse nations and cultures, who have their agendas and might not view it that simply when casting their ballots.