'I was there, for them:' Ron MacLean on how refereeing taught him a greater purpose

For 23 years, Canada's pre-eminent hockey broadcaster donned the stripes and took all the heat the fans could give him. It was, in the truest sense, a calling. 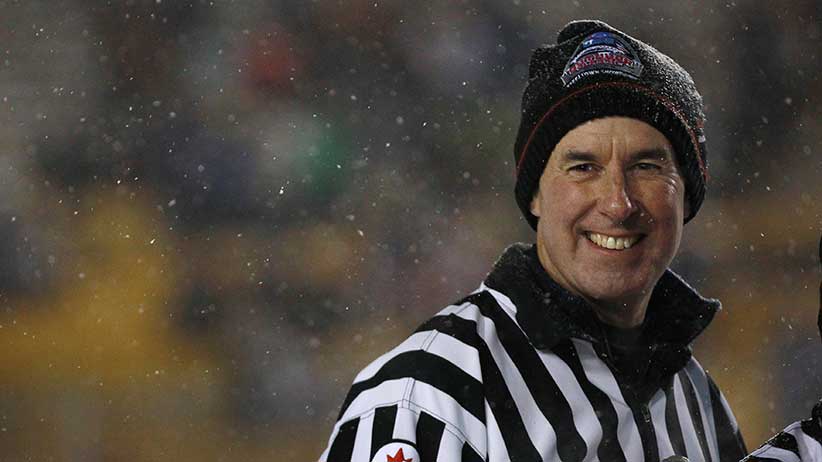 On Jan. 2, I went to a rink in Oakville, Ont. for a scheduled men’s league hockey game. I’m strictly a player these days, but for 23 years in the prime of my life I was a referee. I stopped officiating a few years ago when age and work-related travel conspired, but as a Level 5 in Hockey Canada’s certification program, I used to work junior A, university , CWHL and semi-pro games. On this particular Tuesday night, the temperature was -20 C and a north wind was raging, while the moon was platinum and winter-full—and even former referees pay attention to full moons. The orb had a halo, and I thought to myself, “If only the players had them.” We zebras, as referees are known, our stripes bristle and vibrate under the spell of such moons. Police officers know this trepidation. My 10:15 p.m. game was delayed, it turned out, so after entering the arena, I stood at the corner boards and watched the game under way. Actually, I found myself watching the referee. I don’t know his name, but he wore #98 and he was wonderful.  I was struck by two emotions. Admiration, and envy.

I wanted to be out on the ice wearing those red arm-bands.

According to Todd Anderson, Hockey Canada’s senior manager of officiating, there are currently 33,000 officials registered in the country. It’s an encouraging number especially given a slight dip in recent years in player and team numbers in boys’ hockey. Though others might not understand the attraction, I can see why so many are answering the call to join.

I miss the days when a fan would holler “Hey Ref! You’re missing a great game!” And I’d reply, “Yes, I know, but this is the one they sent me to.”

MORE: Can you beat these hockey legends at our Hockey Day in Canada quiz?

I have always said I would pay to referee. In broadcasting, a host endeavours to let the guest be the star, and hockey officiating holds the same challenge and reward. A job well done will help the performer hit the high note.

Ernest Hemingway wrote: “ Work and see and hear and learn and understand; and write when there is something that you know; and not before; and not too damned much after.”

For nearly a quarter-century I studied rulebooks, polished my skates, made sure the laces were white and then stood at centre during O Canada, watching the steam rise from the backs of the necks of the players on the blue line in front of me. And when the anthem ended, I signalled “Are you ready?” to the goalies and goal judges, then dropped the puck. I was going to be there for them.

RELATED: Ron MacLean talks Olympics, concussions and the future of his show

One night during a senior game in Bentley Alta., the visiting Sylvan Lakers scored a controversial winner in overtime. I will spare you the details, but I should have blown the play dead sooner. The Bentley fans poured onto the ice to protest my work. The mother of the Bentley goalie was yelling so hard the top plate of her dentures came flying out onto the ice. It spun and stopped at my feet. In hindsight, she was right to be upset. I was a mere 20 years old, still cutting my teeth.

As I drove home that snowy night, I resolved to let the experience be a breakthrough, not a breakdown.  My new hobby was teaching me a greater purpose. I was there, for them.

You cannot be a judge, an officer, a referee and not make a mistake. And you can’t escape criticism. But if you can listen to that criticism, and appreciate it, you will grow.

The great literary critic Harold Bloom wrote a book called Where Shall Wisdom Be Found, in which he compared the wisest writers through the ages, head-to-head. One chapter contrasted Shakespeare and Cervantes; another saw Plato juxtaposed with Homer. After examining the works of his forerunners, Bloom concluded, “Wisdom is knowing what to overlook.”

RELATED: Wayne Gretzky on the love of his life

That is the secret of refereeing. There are times in a game you can allow a minor transgression to go unpunished. Never when it comes to safety or a scoring opportunity, but there will be times when a warning is better than a penalty. Same goes for life. Just as I have reflected on my refereeing, so have I examined human rights. Yours and mine. When your liberty harms another, the other person has a right to curb your behaviour. As Judge Oliver Wendell Holmes put it: “Your right to swing your fist ends where the end of my nose begins.”

With refereeing comes the wisdom to know when a situation requires a wink or a whistleblower. Ethics are complicated. We all agree regarding second-hand smoke and seat belts, but should perfume at the gym or polar bear swims be outlawed?

As I watched #98 referee that wintry night in Oakville, I knew he was getting to see not only the hockey game clear and whole, but his entire world. Being a ref won’t help us save the world, but working in that arena is a gift. We are learning to be there, for them. All of them.

In the end, our game in Oakville was tame. That moon, clear and whole, I should have overlooked.