Fern Levitt's depiction of cruel treatment of dogs appears to be moving the needle, as sponsors shy away and mushers consider reform 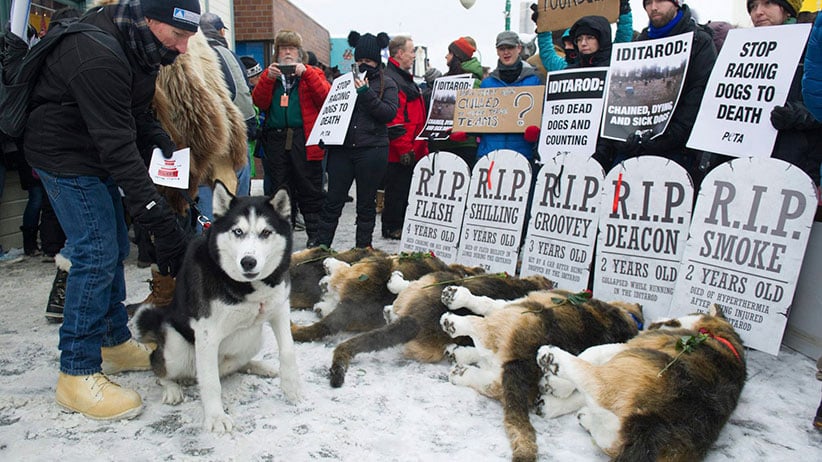 Anchorage resident Terry Fischer, with his Alaskan Husky Litho, happens into a People For the Ethical Treatment of Animals (PETA) protest prior to the ceremonial start of the Iditarod Trail Sled Dog Race in Alaska. (AP Photo/Michael Dinneen)

Fern Levitt literally wants to let the dogs out. The award-winning Canadian filmmaker and animal rights activist spent her weekend holding up protest signs and speaking with local news media in Anchorage, Alaska ahead of the annual Iditarod Trail Sled Dog Race, a roughly 1,500 km tour through treacherous Alaskan terrain. Her 2016 documentary, Sled Dogs, was an exposé of sorts—underscoring the inhumane treatment of the animals in commercial sled-dog operations and the deadly consequences of long-distance races.

Now, amid accusations of animal abuse, their first-ever doping scandal and a decline in sponsorship, the Iditarod and the world of competitive dog-sledding appear to be attempting a cultural shift. Levitt spoke with Maclean’s reporter Kyle Edwards about the inspiration for her work, what she had hoped to achieve in Alaska and her mission to end long-haul dog-sled racing once and for all.

Q: You started out with a passion for human rights work. What inspired you to shift to advocating for sled-dogs?

A: My husband and I went dog-sledding in northern Ontario in 2010, and came home with a dog who had been chained for nine years. When the Whistler sled-dog killing happened in 2010 and the premier of B.C. at that time came out and said it was an anomaly, that this doesn’t happen, I knew enough by then that that simply wasn’t true. I decided as a journalist, as a documentary filmmaker, I really had to expose this. And so, it became a passion for me.

Q: In your short time in Alaska, what was it you hoped to achieve?

A: I’m hoping the Iditarod ends. I don’t see why a race where 150 dogs have died since its inception should continue. First of all, these dogs live on a chain their entire lives. How does any species survive or thrive living on a four to six-foot chain? What the animal behaviourists tell us is that a dog being tethered is cruel and inhumane, and goes against the very nature of dogs. They need to run, socialize and be part of a family—all that is taken away from them when they live on a chain. And that’s why anti-chaining legislation is being enacted in different parts of Canada.

Q: Were you worried about how you’d be perceived by the mushing community there?

A: No, not really. I didn’t make my film for mushers or activists, I made my film for the public—for them to gain knowledge of what’s really going on. I’ve been here to talk about the Iditarod, but here’s the reality of how this impacts dogs. I knew that I would get a lot of media attention and that would bring attention to the issue at hand. It’s also really important to understand that I didn’t do this just for the Iditarod, I did this for the sled-dogs in commercial places.

Q: Are you against the practice of dog-sledding as a whole, or just the racing aspect?

A: No, not at all. I’m against the commercialization of it.

Q: What do you say to those mushers who argue that they cherish their sled-dogs, take good care of them and should be able to race their dogs?

A: Well, the common line that’s being used about these dogs is that sled-dogs are different from any other dog, and therefore can be treated different; that they’re canine athletes. But there’s no truth to that. They’re just dogs, like every other dog, and calling them a sled dog is just a label that these mushers have given them. And saying that they’re different from other dogs is a way to justify the fact that they’re treated differently. There’s nothing wrong with racing them. If these dogs are well-kept, well-loved and well-cared for, I don’t have any problem with racing them.

Q: So where would you draw the line in terms of racing then?

A: It’s the 1,000-mile races that are typical of the Yukon Quest and the Iditarod that have been proven to cause great pain, injury and death. I have a husky—I’ve rescued two huskies from sled-dog operations—and there’s no way I’d every subject him to anything that would cause him harm.

Q: Did you notice any inhumane practices during your time in Anchorage?

RELATED: Move over, mushers: A battle brews over sled dog parking in Iqaluit

Q: How do you think your documentary has impacted this year’s Iditarod?

A: I think hugely. PETA showed [the community] the film and three sponsors have dropped—significant sponsors so they’re losing money. Just looking at the Anchorage Daily News, the headline says the Iditarod can be saved and here are all these changes that are going to take place to keep the race as it is. So they’re already talking about changing the race because there’s been so much controversy and negative publicity.

Q: What do you make of some of the proposed changes—like, if a dog dies that musher is disqualified, and mandatory breaks during the race—offered up by mushers ahead of this year’s race?

A: If they really cared about this animal, changes would have been implemented a long time ago.