In an Edmonton divorce, who gets custody of the Oilers tickets?

A couple embroiled in divorce proceedings in Edmonton are arguing over suddenly valuable property: Oilers seats 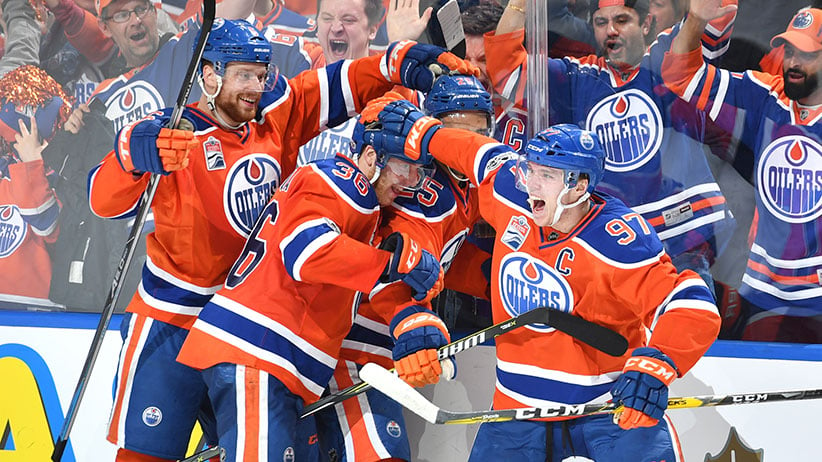 Connor McDavid #97, Drake Caggiula #36, Darnell Nurse #25 and Adam Larsson #6 of the Edmonton Oilers celebrate after a goal in Game Two of the Western Conference First Round during the 2017 NHL Stanley Cup Playoffs against the San Jose Sharks on April 14, 2017 at Rogers Place in Edmonton, Alberta, Canada. (Andy Devlin/NHLI/Getty Images)

They may not love each other anymore, but Donald and Beverly McLeod certainly adore their hometown Edmonton Oilers. How much? Enough to face off in divorce court over custody of their two season tickets.

And if that scenario isn’t Canadian enough for you, the judge’s written ruling certainly is: a mix of compromise, common sense—and an NHL-style draft to divvy up their coveted seats. “The parties shall share equally,” wrote Justice Ritu Khullar, of Alberta’s Court of Queen’s Bench. “Including playoff games, if applicable.”

With megastar Connor McDavid at the heart of a surging Oilers squad, the now-estranged couple could very well end up with Stanley Cup tickets next spring—though not for the same games, of course. Those seats, too, would be evenly divided, as per the judge’s Sept. 27 order.

Watching hockey wasn’t always so complicated for the McLeods. The husband-and-wife fans had been regular ﬁxtures at Oilers games over the past decade-plus (although the team itself wasn’t much to watch, mired down near the bottom of the Western Conference during all those pre-McDavid seasons). When they didn’t attend games together, Donald and Beverly happily shared their pair of seats, mostly with friends and relatives, and sometimes with Donald’s business clients. To borrow the judge’s words: “Ms. McLeod loves going to the games. The tickets were an asset used for family enjoyment.”

But in 2015, after 35 years of marriage, the Edmonton couple separated. Spending three periods together at an arena—or anywhere else, for that matter—appealed to neither.

The tickets have always been registered in Donald’s name and last year, when the ­Oilers ﬁnally broke an 11-season playoff drought, he kept most of the games for himself. He gave about one-third to Beverly (and “one set of playoff tickets at the last minute,” according to the judge). As this new season approached, however, Beverly was determined to receive her fair share. So, with their divorce still pending, she went to court to request an interim property order that would grant her half the tickets for 2017/2018.

RELATED: Edmonton vs. Calgary: A hockey rivalry, but also more than that

Donald objected, claiming, among other things, that his NHL tickets don’t technically qualify as property. What he actually owns, his lawyer said, is the “right” to buy those two tickets every season (there is currently a long wait list for Oilers season tickets, with prices ranging from $2,200 to $16,500, depending on seat location). Donald further argued that, because he is listed as sole owner on the account, his wife “had nothing to do with” the initial purchase of those seats. “I have always been the primary owner of my Oilers seasons tickets,” he wrote in a sworn afﬁdavit. “I spoke to the Oilers ticket ofﬁce on July 11, 2017, and they conﬁrmed this.”

Donald also made sure to point out that the monthly spousal support he forks over—$15,000, as of August 2016—leaves Beverly with more than enough money to buy different seats at Rogers Place. He even offered to arrange those purchases for her.

Justice Khullar was not persuaded. After weighing all the arguments, she concluded that the Oilers tickets ﬁt the legal deﬁnition of a household good (something owned by one or both spouses “that was ordinarily used or enjoyed”) and should therefore be divided. “The evidence establishes that the tickets were enjoyed for recreational or social purposes,” she wrote. “It is important to note that what is at issue are season tickets: this implies the same seats for every game over many years. While the evidence does not disclose the location of the tickets, there may well be an attachment to the particular seats that is not easily replaced by other tickets.”

Khullar then stated the obvious: “A ticket loses its value once a game has occurred.” In other words, it is entirely appropriate to issue an interim property order in this case because the property in question will eventually become worthless. “Failing to do so would mean that the ability to enjoy the property interest is lost, and could not be justly or equitably distributed at the conclusion of the [divorce] proceedings,” she continued.

In the spirit of good sportsmanship, the judge ordered Donald and Beverly to consult an Oilers schedule and pick their preferred games—he ﬁrst, she second—until all 41 home contests are accounted for. (There are some tough choices, to say the least. Sidney Crosby and the Pittsburgh Penguins travel to Edmonton only once, for example; same with the Toronto Maple Leafs and the Montreal Canadiens). Come playoff time—and, if all goes right for the Oilers, a trip to the Stanley Cup ﬁnal—a new draft will commence, with Beverly selecting ﬁrst.

If nothing else, the former couple’s season-ticket spat is a testament to the Oilers’ monumental turnaround. If the McLeods had ﬁled for divorce ﬁve or 10 years ago—when their beloved franchise was a league laughingstock, still seasons away from leaving Northlands Coliseum for the team’s new downtown arena—would these two seats be worth ﬁghting for? It seems more likely at least one party would have gone to court to avoid getting stuck with them.