Is the NHL's ice age of racial non-progress finally ending?

Image of the Week: Matt Dumba's anthem-kneel kicked off the playoffs—and an uncharacteristic flurry of self-examination 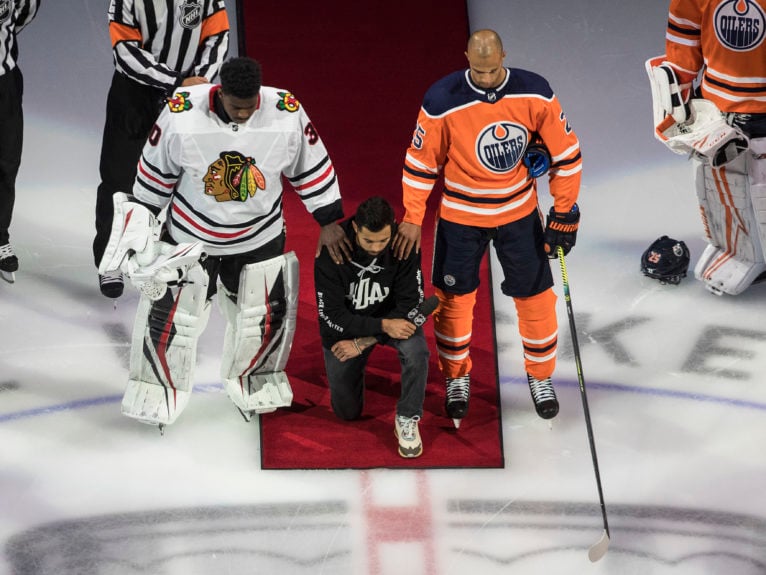 A historic hockey game took place this past Saturday. Not only was it the first NHL game held in our new eerie pandemic world—no audiences, social distancing, skipping straight to the Stanley Cup qualifiers—but it also marked the first time any NHL player kneeled for the American national anthem. That player, ironically, was not American, but Canadian: Matt Dumba, the half-Filipino defenceman for the Minnesota Wild, wasn’t on the ice to shoot pucks. Before the Chicago-Edmonton game began, Dumba walked out onto a red carpet, clad in a black hoodie bearing the logo of an organization he helped create back in June called the Hockey Diversity Alliance. He called for an end to racism, especially within the snow-white world of hockey. Perhaps owing to this racial climate, while anti-racism protests have become de rigeur in other pro sport leagues, the NHL has been uncomfortably reticent. No other players kneeled for the anthem, though Black players Malcolm Subban of the Blackhawks and Darnell Nurse of the Oilers stood at his sides in a gesture of solidarity. (Dumba did not kneel for Canada’s; the following night, during his own game, he raised a fist in solidarity instead.) One is reminded of words spoken in 2016 by John Tortorella—then coach of Team USA during the World Cup of Hockey, now with the Columbus Blue Jackets—shortly after the NFL’s Colin Kaepernick made headlines for that first kneel in protest: “If any of my players sit on the bench for the national anthem, they will sit there the rest of the game,” he warned. Notably, even Tortorella has softened, saying he changed his mind after “listening and watching” to players protesting racial injustice. It’s incremental change, sure, but change nonetheless.