Keep your head up, golfers. There's a better way to putt.

A Nova Scotia academic has found that looking at the cup, not the ball, can save as much as a stroke per round. Will the sport tolerate such heresy? 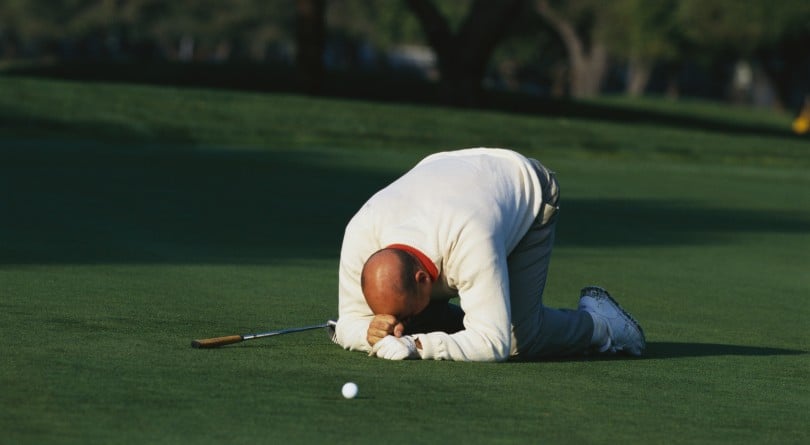 When Sasho MacKenzie goes for a round of golf around Antigonish, N.S., he’s noticing a new trend on the greens that’s mostly his doing. While the pros on TV stare down at the ball while hitting their putts, more and more locals at his home course are keeping their head up, their eyes fixated on the hole. “The more people I play golf with, the more people tend to switch,” MacKenzie says. “I think Antigonish has by far the highest percentage of golfers that now putt heads-up.”

MacKenzie began to look a bit closer at his short game about five years ago. A professor of sports biomechanics at St. Francis Xavier University—and an avid golfer—he was thinking about how in basketball, for example, research showed that players make more shots when their eyes are on the rim and not on their hands. Similarly, in darts, the thrower stares at the dart board, not his or her throwing hand. “I wondered why in golf, especially for such a small movement, is everybody staring at the ball,” MacKenzie says. What if people kept their eyes on the target like other sports?

If golf traces its roots to 15th century Scotland, as most history books contend, then his new research has the potential to upset 500 years of putting wisdom. The site of his experiments was a former municipal building that was previously a residence for priests. “My lab still has the original red drapes and comes complete with an altar,” he says. Now, there’s also a large indoor putting green atop a table, of sorts, complete with mechanical actuators to manipulate the contours of the surface at various points

For his study, co-authored by his former student Neil MacInnis, MacKenzie compared golfers’ proficiency when putting the conventional way—eyes on the ball—and putting the new way, looking at the cup. For flat, straight shots, MacKenzie found no difference in how often the golfers sank the putts. However, he noticed those who looked at the hole seemed to have better speed control. A follow-up study looked at with putts that curve on the green, “the theory being breaking putts are more sensitive to errors in how hard you hit the ball,” he says.

RELATED: Why Canadian golf is dying

After a single 45-minute practice session—and with no other change to a golfer’s technique or routine—MacKenzie found those who putted heads up were sinking about 40 per cent of their putts, compared to a 37 per cent success rate when they were looking at the ball. A three percentage point difference might sound small, but for the average golfer, it could mean one fewer stroke per day at the links. More serious golfers involved in four-day events could shave a couple strokes off their final scores.

Two strokes can mean a lot. Last April at the Masters, the sport’s most storied tournament, two strokes would have reversed the final positions of runner up Rickie Fowler (who claimed US$1.2 million in prize money), and winner Patrick Reed, who took home the coveted green jacket and $2 million. For others, two strokes could be the difference between making or missing the cut.

“We’ve been doing it for years and we had no idea how much of a positive impact looking at the hole could be,” says Bob Christina, a golf researcher and educational consultant with the Pinehurst Golf Academy in North Carolina. Christina co-authored a study in the early 2000s about the benefits of putting with your head up in practice to get a better sense of distance control—very much akin to the St. Francis Xavier University study. He has since found other benefits. For golfers struggling with “the yips”—an unexplained attack of jitters that leads to missing easy putts—looking at the hole relaxes the body, Christina says: the golfers are no longer constantly staring at the ball, the position of their feet and hands or the grip on their putters. “They’re already in over-control mode. Looking at the hole frees them up.”

Most still miss those really long putts, but those who hit heads-up gauged the distance better and ended up much closer to the hole for their next shot, “which is huge because then you three-putt less,” Christina says.

This putting technique is not entirely foreign to the pros, even if it is seldom deployed on the PGA tour. Former world No. 1 Jordan Spieth has been known to keep his eyes on the hole for shorter putts. At the 2015 U.S. Open, one of golf’s four major tournaments, South African Louis Oosthuizen credited a switch to heads-up putting with his late rally to a second-place finish (and a US$900,000 payday).

At the British Open a month later, Oosthuizen’s style caught the attention of Tiger Woods. “He was looking at the hole when he was hitting putts, and they were going in from all different distances,” Woods said. “I’ve never seen that before, but it obviously worked.” (Oosthuizen finished runner-up at that tournament, too.)

Since adopting this technique himself, MacKenzie says he makes about 10 per cent more of his shots. But his fellow heads-up proponent Christina say he’s fine putting the old-fashioned way, adding dryly: “I never had a problem with my putting game.”