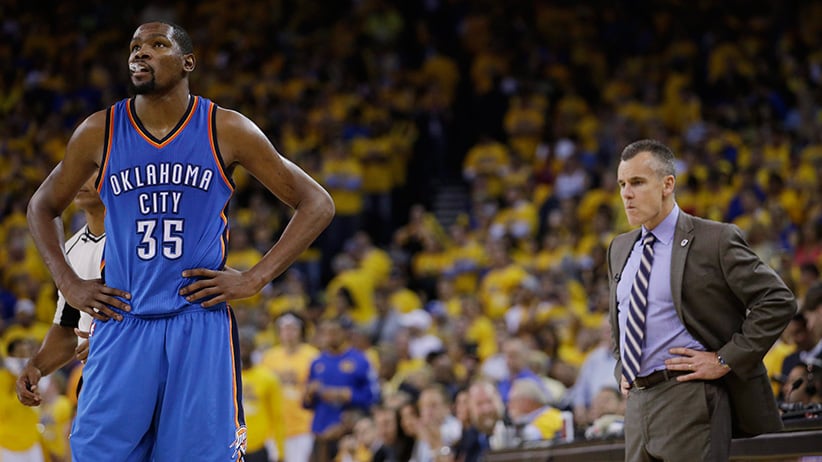 Oklahoma City Thunder’s Kevin Durant (35) and head coach Billy Donovan stand next to each other in the closing minutes of the second half in Game 5 of the NBA basketball Western Conference finals Thursday, May 26, 2016, in Oakland, Calif. Golden State won 120-111. (Marcio Jose Sanchez/AP)

A superstar basketball player comes to a decision point in his career, in his growth as a person. He defers and hems about the difficulty of his choice before announcing that he’s “decided” to leave the championship-less town that he says raised him—announcing his independence from the city either figuratively, or literally, on his and America’s Independence Day.

Meanwhile, in another city where barely fathomable men hurl an orange ball through a metal ring, people return to the streets where they had once burned the king’s robes in order to elevate the king to a god. In Cleveland, old acquaintance has been forgot, because acquaintance isn’t as good as annunciation. LeBron James left Cleveland in the dark, and the city’s rage burned as brightly as the fires from his jerseys, but now, no one remembers the weight of their burdens—only the relief that they can breathe again. It’s a victory parade in Cleveland, and a canonization for James.

And elsewhere, an already favoured team gets better. A city, already blessed by circumstance, stardom, or both, revels in its overkill excesses. Championship hopes become championship ring fittings as league icons link arms and take a city to the top. Miami, Golden State, the ouroboros, whatever.

History eats its own tail. No one learns anything. And no matter the sound and the fury, these momentous events in basketball are earthquakes that somehow flip the sports landscape 360 degrees, right back onto its foundation, undamaged.

As sportswriters and sports fans alike break down Kevin Durant’s surprising announcement that he would leave the Oklahoma City Thunder to partner with Steph Curry and Draymond Green on the already elite Golden State Warriors, what becomes clear is that LeBron James’s Decision—the first one, the one in 2010—was the real game-changer for the NBA. It arguably set off the modern era of professional basketball we live in now, of an association whose franchise powers are most dictated by its superstars; that fact alone drove one of its most prestigious franchises, the Philadelphia 76’ers, to reach new lows in losing to try and chase the kind of league-shifting talent you can typically only acquire with a No. 1 draft pick. And you win, these days, as much by on-court play as by networking; its best players make friendships on national teams and All-Star games, and those allegiances are as significant as salary-cap situations in free-agent negotiations. (Pity on the team whose best players aren’t worthy enough to be invited to such affairs, or whose players live in Canada, where the tax and branding situations are too dim to overcome any wattage of personality.)

The impact of the decisions that came after the original one—LeBron’s Decision 2.0 to return to the Cleveland Cavaliers, where he won a title this year, and Durant’s Monday move—are diminished because the last six years have proven they’re merely reaffirmations of what we already know. Stars move where they want to go. Those star-studded teams will win championships. The NBA will go on. Hyper-drive hot takes about how nothing will be the same are wrong, because in fact everything is the same.

In the meantime, a narrative writes itself. Oklahoma City fans will despair the departure of their massive name (though don’t doubt a potential breakout season for Thunder star Russell Westbrook, who appears to be fuelled by internal fury) and then look to exorcise the chip on their shoulder; in a crowded Western Conference, it may be that Oklahoma City elects to blow up the franchise to chase the city’s first-ever crown. Durant, meanwhile, will see his brand wounded, assailed (wrongly) for daring to make a big deal of his decision, one that held so many franchises’ futures at stake. Those claims will, as LeBron taught us, stalk him for some time—or at least until the shiny trophy he wins comes through.

Without a doubt, the Golden State Warriors will win games in bunches now. How could they not, with two of the three best players in the association? And the Warriors will surely win a championship with Durant, who will finally shake years of claims he can’t win the big one.

But that’s the less interesting part. What is more interesting is what comes after that. Because in the NBA, nothing changes except the laundry.