Lokomotiv: The team that disappeared

Five years ago, an entire Russian pro hockey team took flight—and then fell back to earth. 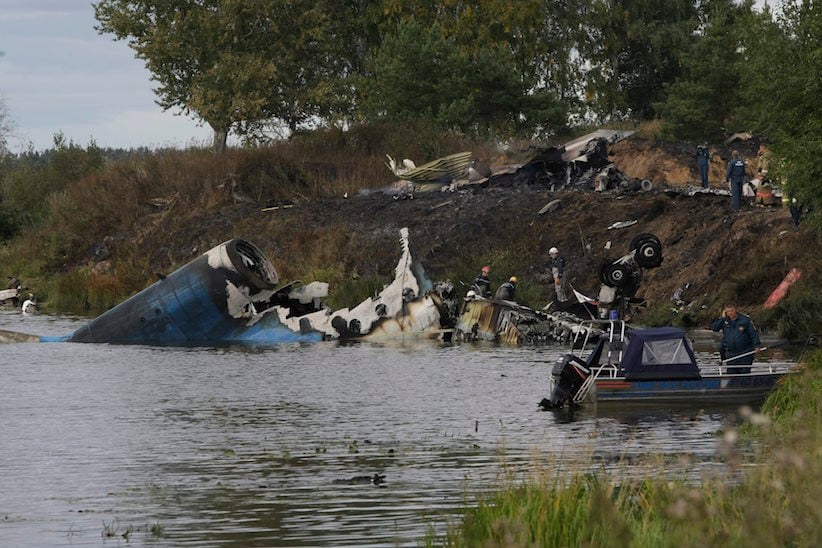 Rescuers work at the crash site of Russian Yak-42 jet near the city of Yaroslavl, on the Volga River about 150 miles (240 kilometers) northeast of Moscow, Russia, Wednesday, Sept. 7, 2011. The Yak-42 jet carrying a top ice hockey team crashed while taking off Wednesday in western Russia. The Russian Emergency Situations Ministry said the plane was carrying the Lokomotiv ice hockey team from Yaroslavl.(AP Photo/Misha Japaridze)

Five years ago, the players, coaches and trainers of Lokomotiv Yaroslavl boarded a flight that promptly crashed—killing nearly everyone on board, in an instant. Read Brent Popplewell’s full story on Sportsnet.

AT 4:05 IN THE AFTERNOON all but one of the Railway Men were sealed inside an aging plane, staring down an empty runway. In the cabin sat Lokomotiv, the gods of Yaroslavl whose names 600,000 people cheered and cried. Twenty-six hockey players and 11 coaches and staff embarking on a two-hour flight to their season opener in Minsk.

Directly behind the cockpit sat the coaches. There was Brad McCrimmon, the ‘Beast’ from Saskatchewan, one of the men on-board with his name on the Stanley Cup. Still driven by ambition at the age of 52, he had recently left his home in Detroit and crossed the Atlantic to coach this team. And beside him sat his assistant, Igor Korolev, the former Maple Leaf who played for five teams in a 12-year NHL career, back in his homeland but far from his family in Toronto on this, the day after his 41st birthday. Beside him sat his old friend Alexander Karpovtsev, the former Ranger who’d stood by Korolev’s side on his wedding day in Moscow 21 years ago. He was the second man aboard this plane with his name on hockey’s most revered chalice.

Behind the coaches sat the players. Young and old, from the former all-star to the struggling prospect, together they formed one of the strongest teams in the second-best league in the world.

At the front sat the stars. There was Pavol Demitra, the alternate captain of Slovakia’s 2010 Olympic team. The man who led that tournament in points and pushed his countrymen past the Russians in the preliminary round with a shootout goal. There was Ivan Tkachenko, the face of Lokomotiv, who had scored the winning goal in overtime in his team’s final home game last season. There was Alexander Galimov, the fighter and showman. The one who blew a kiss to his wife after every goal. And behind them sat the rookies, including two of the country’s most talented prospects: best friends Yuri Urychev and Daniil Sobchenko, members of the Russian Junior Hockey Team that defeated Team Canada in the gold medal game nine months earlier in Buffalo. Both of them dreaming of a life in the NHL. And near them was an open seat, reserved for their friend, Maxim Zyuzyakin, who wouldn’t be getting on this flight.

Twenty-three Russians, three Ukrainians, three Czechs, three Belarusians and a Slovak, a German, a Swede, a Latvian and a Canadian. One of the proudest teams in the Kontinental Hockey League. A 52-year-old franchise, as storied as any in Russia, about to commence an eight-month campaign against 23 teams spread across eight time zones of the former Soviet Union, each team fighting for the Gagarin Cup, Russia’s greatest hockey prize. The people of Yaroslavl said the Railway Men were favoured for victory in Minsk and for victory thereafter. It was this team, the people said, that was destined to sip from Gagarin’s Cup. Now they sat together, heading west toward a clear horizon above a village built around a church the colour of chalk and a tranquil tributary flowing into the Volga River.

But the Railway Men were not alone in the cabin. There were three Russian flight attendants sitting among them. And there was Alexander Sizov, a 52-year-old flight engineer, one of two engineers on-board, who had inspected the plane before takeoff and who now sat behind the players, his seatbelt unbuckled. In the cockpit there was the pilot, Andrei Solomentsev, a Muscovite with 6,900 hours at the helm. Beside him was Igor Zhevelov, his co-pilot and friend. Their task: fly RA-42434 from Moscow to Yaroslavl then onward to Minsk.

Outside it was a clear, late summer day. Nearly 18 degrees Celsius with a light wind from the north, a few clusters of dark, rounded clouds hovering a kilometre from the ground. As the Railway Men settled into their seats, the control tower cleared the captain to roll the 18-year-old jet onto runway 23 and power up the engines for a westbound takeoff. The airport was busy that afternoon. As the three engines shuddered to life, the players could look out their windows at all the other planes on the tarmac, arriving from around the world to deliver foreign dignitaries for a global forum-the Turkish president and the Russian president among them.

Then the cockpit radio crackled.

“Permission given for flight.”

And so it began, the shortest journey and the darkest day in the history of hockey.

One flight, seemingly as routine as any other, the second of three that day for the crew. The first of 50 for the team this season. One of thousands in the careers of the veterans. On the day they left for Minsk, they didn’t get the chance to say goodbye. Not to their families and not to their fans.

They’d been travelling their entire careers. Each of them had logged countless hours on the road and in the sky. On any given day a team embarks on a journey. They come together as individuals, at unique stages in their careers and lives. They board buses and planes-just as they have hundreds, thousands of times before. They sacrifice days with their families, and assume an unspoken risk in order to live out the dreams of their youth.

After many journeys and victories, a few become legends and they are seen like gods, whose every move is watched and analyzed by the fans who cheer for them.

On Sept. 7, a team, as mortal as any other, embarked on an 82-second trip down a runway, into the sky, then back down to earth.