Meet Tony Harris, the man in charge of painting the NHL’s finest

Gordie Howe, Darryl Sittler, and Nicklas Lidstrom all made the cut. But Harris saved the Great One for last. 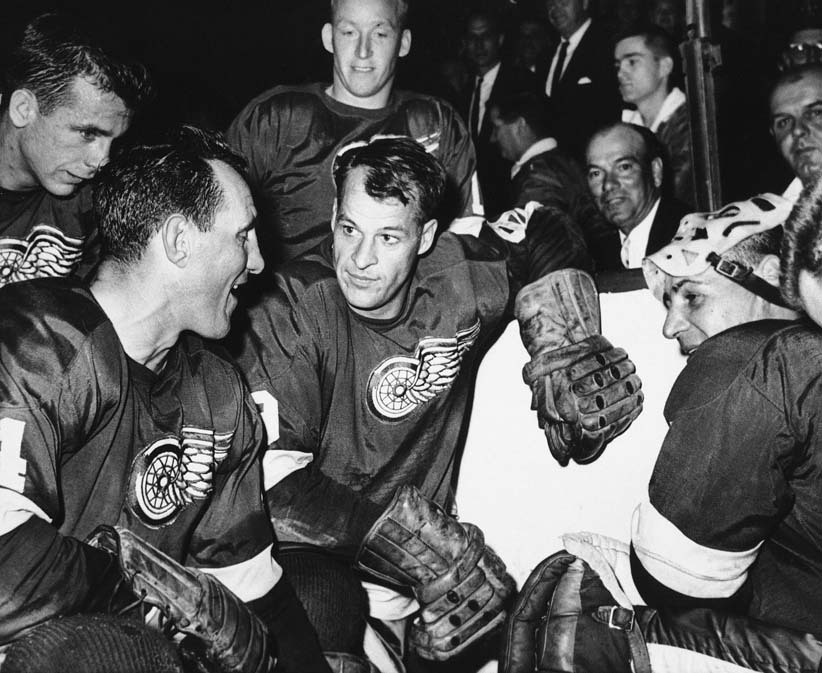 The last one was The Great One.

Every single portrait that Tony Harris painted in his year-long project to commemorate the NHL’s top 100 players of all time was done with the same painstaking eye for detail, an effort to capture in a swirl of oil on canvas something quintessential about the men who defined the sport he loves.

But Wayne Gretzky? There was a reason he was left last.

“It wasn’t that there was more pressure doing Gretzky compared to any other one,” the Nepean, Ont.-based artist said. “It just took time to find an image that said ‘Gretzky’ and I didn’t want to do anything that had been done before and we went right to the last minute to find the right one.

“There was a posture Gretzky had, a way of turning and yet he was always looking forward…. I wanted to capture his vision and awareness of everything that was going on.”

Capturing the details that validated the real-life images of the greatest players in hockey was his driving force throughout the effort.

Harris loved getting Toronto Maple Leafs great Darryl Sittler’s 1970s curls just right or making sure that Detroit Red Wings defenceman Nick Lidstrom was in motion, looking to snap a pass up ice or that New Jersey Devils bruiser Scott Stevens had the right measure of menace in his eye. As a former goalie he relished getting the details of the old equipment just right—a seam popping and some old stuffing creeping out of the edges of a pair of brown leather pads. He loved the details of the old gear: “I could paint Jofa helmets all day.”

He grew up idolizing Tony Esposito—sketching the Blackhawks’ No. 35 undercover at the back of class at Lakefield College School over and over was where he first found himself pulled towards art. Completing that portrait was about as full circle as one could conceivably get.

“I was thinking about myself imitating him playing ball hockey and just thinking about his career in general—the guy had 15 shutouts in 63 games in 1969-70, back when it was hard to be a goalie.”

Harris got the commission last fall and started in November working off a preliminary list of 33 of the top 100 players, learning of the rest when everyone else did after the top 100 players were announced at the all-star game gala in Los Angeles in January. The first stage spent trying to find the right photo image of each player. Once that was signed off on he would get to work in his basement studio in his home in the Ottawa suburbs, starting work early in the morning after his wife, Lianne Laing — just recently retired as a morning-show host in Ottawa — would leave for work and before getting his daughters off to school; through the day and picking up again at night when his family was asleep. It worked out to 20-25 hours a portrait, on average.

Harris is not much for math, so a friend broke down the task ahead of him when he left base camp: two-to-three portraits a week for a year, or 52 consecutive 50-hour weeks spent in his studio.

“I tried really hard not to think about it as 100 paintings,” he said. “I tried to think of it as one painting with 100 pieces.”

But there must of have been some moments of panic as the time flew by and the list moved ever so slowly?

“That was every day,” he said.

It was a task he’d been training for his entire life, it turned out. He played football and hockey at a high level—he was a quarterback at Bishops University and played professionally briefly in London. He played hockey through junior. But all along he hated school, it was only his love of art that got him through.

He had a brief detour into teaching at Lakefield, the private school outside of Peterborough, but felt like a kid back in class again when all he wanted to do was draw Esposito.

He had started painting on the side at Bishops, doing portraits of his football teammates that their parents would buy. After he left teaching his first break was painting golf courses for clubs around the country celebrating anniversaries or other occasions.

But athletic portraits were his first love. There was a Ken Danby print at Lakefield he used to spend hours studying. As a child he received a gift from his parents—a book called The Professionals—that included portraits of NFL greats by Merv Corning, who was to football art what John Facenda’s narration was to NFL films.

While playing in the short-lived Budweiser British North American Football League he would spend free time at the National Portrait Gallery in London and amidst images of Shakespeare and Churchill found himself transfixed by a painting of British middle-distance great Sebastian Coe.

“Even at rest he was in motion, like Bobby Orr between the whistles,” he said.

It was his Peterborough connections that led to his NHL work. He used to be an instructor at Roger Neilson’s hockey camps. A fellow counsellor worked for the NHL Players’ Association. When the NHLPA introduced the Ted Lindsay Award Harris pitched the idea of a portrait of the winner.

It didn’t hurt either, that Harris’ portrait of Neilson hangs in the offices of several NHL executives.

“Roger’s like the Kevin Bacon of hockey,” said Harris.

So when the league was working with the NHLPA and thinking of how to commemorate its 100 greatest players, Harris was the obvious choice.

Originally the plan was a single piece—almost like a collage—with everyone from Milt Schmidt to Sidney Crosby on one canvas, but Harris talked them out of it, suggesting that no matter what approach he took there would be a hierarchy of sorts—someone would have to be near the middle and others near the margins.

How about 100 individual portraits?

The league agreed and in one fell swoop a year of his life was accounted for. It was an incredible amount of work, but it was a labour of love, as Harris got to revisit the memories of his childhood.

“I’m 53 so I’d say 80 per cent of the players I knew something about before the project started,” he said. “I grew up with Esso Power Player stickers. When I was 13 I knew every player in the league.”

“But you still learn things. You look up Bobby Clark and you kind of forget he had two league MVPs and 1,200 points and Cups. I remember hating him as a player, but you realize he deserves to be in the top 100.”

For some of the older generation players, there are almost no images to choose from, so Eddie Shore is painted standing at attention, staring straight ahead, as in photographs from the era.

Some days were pure joy, he said, and he would fly through a portrait in 18 hours, “and then you’d run into Toe Blake and it would take you four days.”

His goal was simple: “I wanted them to look cool. The last thing I want is [the players or their families] to be in a position they don’t like. If I was that guy, would I think: ‘This is cool.’”

Mission accomplished. This past weekend all 100 portraits were displayed for the first time at Windsor Station in Montreal, not far from sight of the Windsor Hotel, where the National Hockey League was founded. For Harris it was overwhelming. Incredibly it was his first public exhibition. “I’ve never had a gallery show,” he said. “But if an NHL player is getting a painting for his 1,000th game, chances are it was mine.”