No matter who you rooted for, the NBA Finals were a classic 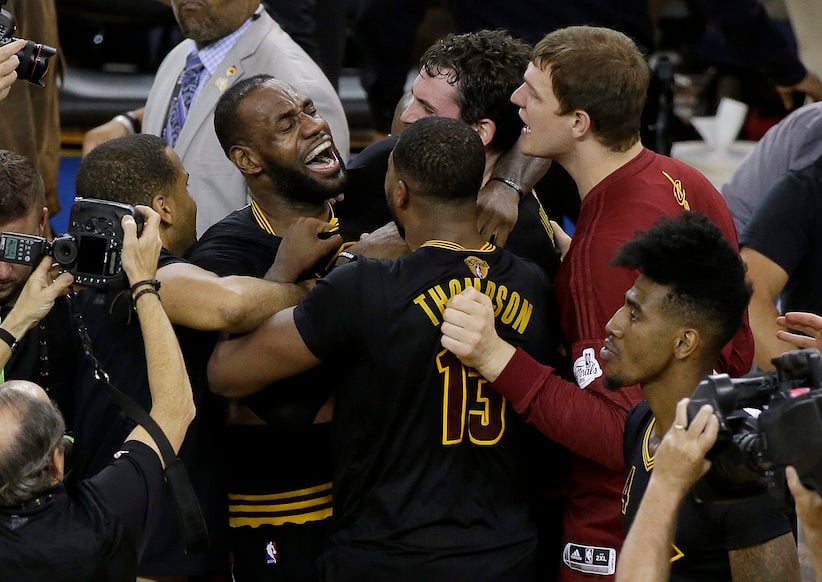 This story, by Michael Grange, first appeared on Sportsnet.

OAKLAND, Calif. – Who did you have?

Were you all in on the Golden State Warriors completing their 73-9 season with a second straight championship and putting themselves firmly in discussion with the Showtime Lakers and the mid-90s Lakers and any other NBA dynasty you’d care to throw in there as the greatest team of all time?

Or were your rooting for LeBron James to add another line to his growing resume – this one bolded and underlined – as one of the NBA’s greatest players while leading the Cleveland Cavaliers to their first championship and the first of any kind for Cleveland in 52 years?

Did it really matter? Does it now?

Elation or heartbreak, either emotion is perfectly acceptable. The point is after one of the tightest, most dramatic Game 7s in NBA Finals history, a contest that delivered on all its promise, there was something there to be felt, deeply if you wanted.

If you weren’t entertained, you were dead. It’s about that simple.

In the end, history was made. The Cavaliers ended the title drought for a city craving something to call their own a moment 52 years in the making with their 93-89 win that was in doubt for every second of the game, just the way we like it.

James put a storybook ending on his own personal journey home from Miami, earning Finals MVP honours by finishing an epic series with just the third triple-double in NBA Finals history – 27 points, 11 rebounds and 11 assists.

And the Warriors made some too, though not the kind the crowd at Oracle Arena came to see. The Warriors lost nine games all season, Sunday night was their ninth loss in a playoff road that was far rockier than anyone would have predicted.

There was some irony that in a game between the high-octane Warriors and the Cavaliers, who swept into the Finals scoring at an even higher rate, the offence slowed to a crawl down the stretch. What was supposed to be a ballet became a scratching, clawing fight, like rats going at it in a wet sack.

And when for a moment there was some daylight, as when Stephen Curryand Andre Iguodala broke away for a 2-on-1 break? There was James swooping in for a much needed potentially game-saving block. It mattered because a moment later, given just a bit of air space, Kyrie Irving hit the shot of his life, a triple with 53 seconds left that gave the Cavs a 92-89 lead on the game’s first field goal in nearly four minutes.

Curry wasted most of the next shot clock trying to find space for an answer but missed a fitting end for a Finals in which he never quite got on track, ending any debate about who was the NBA’s greatest player of the moment – himself or James.

James was fouled going to basket going to the basket on the next possession, made one of his free throws and the Cavs were up two possessions with 10 seconds left.

Even the Warriors don’t have those kinds of magic tricks in their bag, and the title went to Cleveland, but there was no question, no matter where you stood, you would remember this. You were entertained.

Read the rest of this story at Sportsnet.