No one leans in like Bianca Andreescu, Canada's new tennis phenom

Image of the week: The 18-year-old has followed up huge upset wins in New Zealand by steamrolling opponents in Australian Open qualifiers. Where did this kid come from? 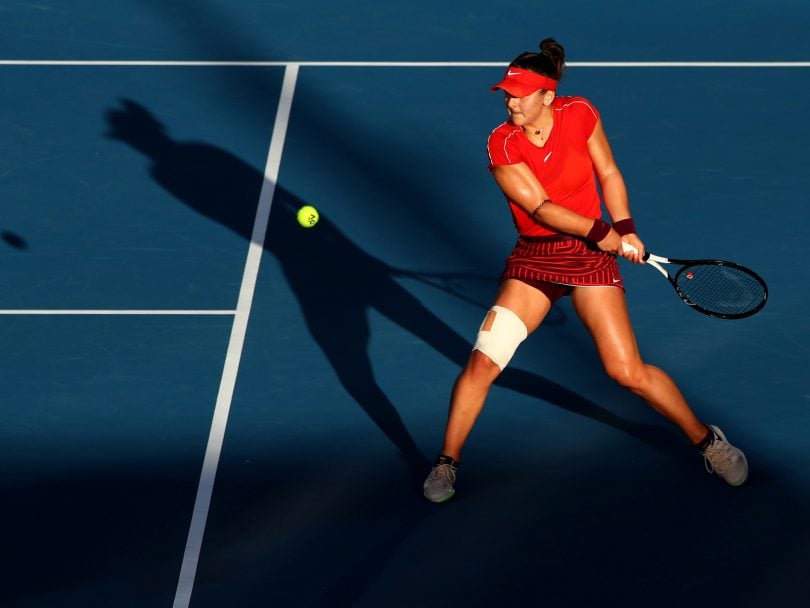 Andreescu powers up for a backhand during her semifinal against Su-wei Hsieh of China at the ASB Classic in New Zealand. (Hannah Peters/Getty Images)

On Jan. 3, at a tournament in Auckland, N.Z., rising Canadian tennis star Bianca Andreescu stunned fans of the sport with an upset victory over Caroline Wozniacki, the Danish reigning champion of the Australian Open. The next day, the 18-year-old defeated Venus Williams; then, in Australian Open qualifiers on Friday, she forced the Czech Republic’s Tereza Smitkova to concede, securing her place in the main draw of the Grand Slam event, which starts on Monday. “This week has been a dream,” Andreescu tweeted after her wins in Auckland. She isn’t the only one dreaming: in the last decade, a handful of Canadian tennis stars, all born in the late 1990s or early 2000s to immigrant parents, have taken turns in the international spotlight. Denis Shapovalov (Israeli-Russian parents), Françoise Abanda (Cameroonian roots) and Felix Auger-Aliassime (whose father is from Togo) join Andreescu, whose Romanian parents returned her to the country to hone her tennis skills as a young teen. Why so many children of immigrants? According to a 2014 study by the Institute for Canadian Citizenship, tennis is the third-most popular sport among newcomers, after soccer and badminton. Based on the fact that 250,000 permanent residents settle in Canada every year—most of whom become citizens—the study’s authors have an ominous prediction for fans of the good ol’ hockey game. “Newcomers arrive with different sporting passions and traditions and may be unfamiliar with sports traditionally popular in Canada,” they write. “These sports may see their participation levels drop, while new sports—like cricket, table tennis and badminton—will grow in popularity.” Better start watching the young stars early, so you can boast, years from now, “I remember watching Andreescu when she was just 18!”