The Prospect: Why Quebec’s Maveric Lamoureux is on his way to NHL stardom

Genetics made Quebec’s Maveric Lamoureux a shoo-in for the NHL. Determination got him drafted. 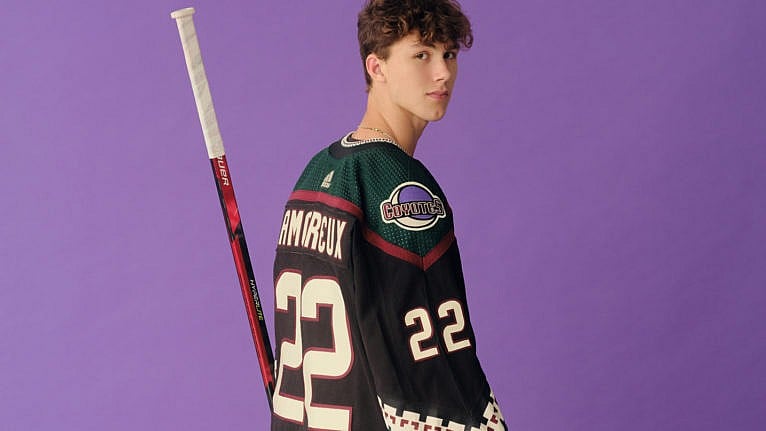 Six-foot-seven is obviously an ideal height for basketball, but hockey? It’s proven to be a major asset for 18-year-old Maveric Lamoureux, a towering defenceman for the Quebec Major Junior Hockey League’s Drummondville Voltigeurs, and a first-round pick for the Arizona Coyotes at this year’s NHL draft. Born in Laval, Lamoureux’s early affinity for Canada’s game was the stuff of Tim Hortons commercials. “My first memory was of jumping on my parents’ bed at 6 a.m. on a Saturday when I was four, waiting to be on the ice,” Lamoureux says.

By five, he was lacing up for practices coached by his father, Patrick, a former semi-pro player for the Laval Chiefs. (His mom, Isabelle, is also athletic: she coached high-level gymnasts.) As Lamoureux grew up, he skipped from league to league, living in billet houses across Quebec, away from his family for long stretches. He grew in another sense, too: by 16, Lamoureux had soared past six feet and became a draw for Drummondville. Wingspan aside, Lamoureux is known within the QMJHL for his gleefully physical play, honed during his years in lacrosse, Canada’s other game. “In videos of me playing, you’ll see me smiling,” he says. “And a lot of little cross-checks.” (This, too, is an inheritance from Patrick, who his son says was a “pain in the ass” on the ice.)

Between 2020 and 2021, Lamoureux’s first season with the Voltigeurs, his shoulder was dislocated seven gruesome times.

Somehow, that didn’t deter pro scouts—between 20 and 40—sent to assess the junior giant. In July, Lamoureux was one of nine Canadian rookies selected in the first round of the NHL draft, as his euphoric parents looked on. “I just saw my dad screaming,” he recalls. “He didn’t have the chance to get drafted, so he lived that moment with me.”

Fresh off of a summer stint of shoulder rehab in Phoenix, Lamoureux returns for another season in Drummondville this fall. He’ll be glued to Coyotes games when the NHL returns on October 7, but he’s also jumping-on-the-bed-levels of excited to return west for training in the coming months—and to wear his Arizona jersey on the ice. “I would say I’m excited for the heat,” he says, “but it’s actually just about playing there.”