After a tough loss to Germany, the team defeated the Czech Republic 6-4 for the bronze medal 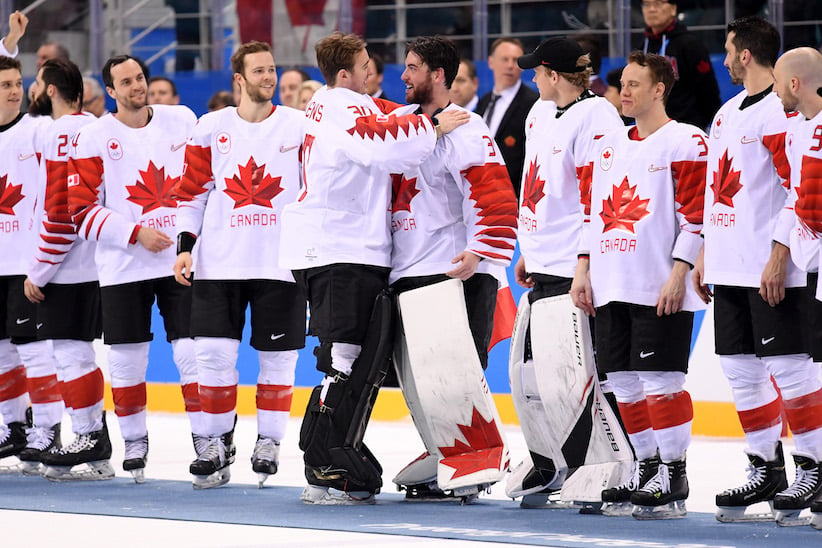 GANGNEUNG, South Korea – There was a stirring speech from general manager Sean Burke. Martin Brodeur sent an encouraging text message. There was a video featuring a clip from Jamie Clarke, the motivational speaker who had players on the edge of their seats during an hour-long address before the Olympics started.

The national men’s team knew it was going to be hard to flush the frustration from an unconscionable semifinal loss to Germany that only gets more infuriating the more you think about it, so it tackled it head on Saturday. Canadian hockey hubris tend to see anything other than gold as a worthless consolation prize and to leave the 2018 Pyeongchang Games with bronze the players needed to change that mindset, stat.

“We talked about it all day long, wanting that medal,” said assistant captain Andrew Ebbett. “Guys were down, you could see it when we came in this morning, music wasn’t on, a couple of guys walked around and said, ‘Hey, let’s leave last night, just focus on tonight. Let’s leave it all out there and play for that medal.’”

The Canadians certainly did that in a wild and entertaining 6-4 victory over the Czech Republic that gave Canada its 29th medal at these Olympics. They played a hard, edgy and opportunistic game and had they done the same against Germany, they would have been playing for gold Sunday and not bronze.

That’s something they’ll surely regret that for a long, long time, regardless of how steep a challenge it would have been to beat a stacked Russian team featuring the ageless wizardry of Pavel Datsyuk and the mercurial-as-ever Ilya Kovalchuk.

But there’s value and meaning in the secondary achievement of winning your last game and not going home empty-handed, something obvious as each player beamed when the bronze medal was hung around their necks afterwards.

READ: How social media impacts athletes at the Olympics

“Incredible,” said Kevin Poulin, the backup who took over from the injured Ben Scrivens during the 1-0 quarter-final win over Finland and made 30 saves versus the Czechs. “Twenty-four hours ago we were really sad and mad and emotional. Today, we’re on top of the world. Even if it’s not a gold medal, it’s a medal and it’s going to stay for us for the rest of our lives.”

Added defenceman Mat Robinson, who set up the game’s first goal and logged just under 24 minutes of ice time: “You don’t want to go out the way we felt last night. This is something you’ll remember for the rest of your life. Whether it’s a gold or it’s a bronze, it’s something you wear proud. You serve your country pretty well when you get to wear this medal around our neck.”

Robinson, along with fellow blue-liners Chris Lee and Maxim Noreau were among the steadiest players for Canada during the Olympic tournament, while Derek Roy, who led all forwards with 19:51 of ice time against the Czechs, was consistently the team’s best attacker.

But there was an engagement from up and down the roster from the get-go and the Canadians played the type of strong 60-minute game they needed to put down a relentless Czech team that forechecked well but made a few costly errors.

The Canadians took control during a wild first period that included an Olympic-record tying three goals by two teams in 31 seconds.

Ebbett got it started when Robinson’s centring pass deflected off his skate and past Pavel Francouz on a power play to open the scoring at 8:57. Just 16 seconds later, Martin Ruzicka tied it up when he shovelled in Roman Cervenka’s cross-ice pass, but a mere 15 seconds after that captain Chris Kelly tipped in a Cody Goloubef point shot to restore Canada’s lead.

Roy then gave Canada some breathing room at 15:57 of the period, hustling to turn a Brandon Kozun rush into a 2-on-1, taking a nifty pass and slipping it through Francouz’s legs.

“We were ready,” said Ebbett. “We said in the room the last couple games haven’t been good at the start, so we just started to focus on the first. (Assistant coach) Dave King did an unbelievable job pumping the boys up, Mr. Positive as usual, he said just focus on 20 minutes at a time. That’s all you’ve got to do.”

Things tightened up during a goal-less second period before the teams went all pond-hockey-ish in the third.

Ebbett redirected a clever Kozun pass at 5:50 to extend the lead, but then 46 seconds later Jan Kovar fired home a loose puck in the slot to make it a 4-2 game. A Kelly wrist shot from the slot 3:01 later made it 5-2 and Wojtek Wolski shovelled in a rebound at 15:23 for a 6-2 edge, with a disallowed Czech goal in between. Cervenka then scored at 16:26 and 17:55, the second coming after a too-many-men penalty, to make it a 6-4 game, but that was all they got.

“They never stopped, they came hard, they kept going and going and they worked hard. We did a good job to stay composed,” said Poulin, who made several strong stops and dealt with fierce traffic in front throughout. “We focused on the right things.”

As a reward, they got their Olympic moment, rushing off the bench after the final buzzer and exchanging hugs around the net before shaking hands with the Czechs, and circling the ice and tapping their sticks to Canadian fans in attendance at Gangneung Hockey Centre.

Scrivens, who didn’t dress but put on his equipment for the medal ceremony, hugged Poulin over and over, patting him on the shoulder.

“A lot of F-sharps and good works,” is Scrivens’ PG description of his message to his fellow netminder.

They skated by the bench to celebrate with ebullient Hockey Canada officials and eagerly lined up to get their medals, smiling and pointing to family members in the stands. Once on, players brought them up to their face, examined their new bling and savoured an experience they never expected to have.

Now it’s over, ending not in gold but in bronze, for a team thrown together after a stop-and-start selection process, given some three weeks to gel and then win in a pressure-packed environment.

Maybe they could have won gold. They didn’t give themselves a chance. But winning your last game is way better than losing it.

“I’m probably always going to think about that game against Germany, that was tough to go to sleep and deal with that,” said Ebbett, an eight-stitch gash by his nose suffered the night earlier still fresh. “The way we bounced back just shows the character. We didn’t know who was coming, who was going to the Olympics, a year ago we thought we had no chance, ever. For our group to come in and walk away with a bronze medal, it’s a big honour.”

Everyone wants gold, and that should always be the goal. But bronze can be pretty damn good, too.