Raonic falls to Murray in straight sets at Wimbledon final 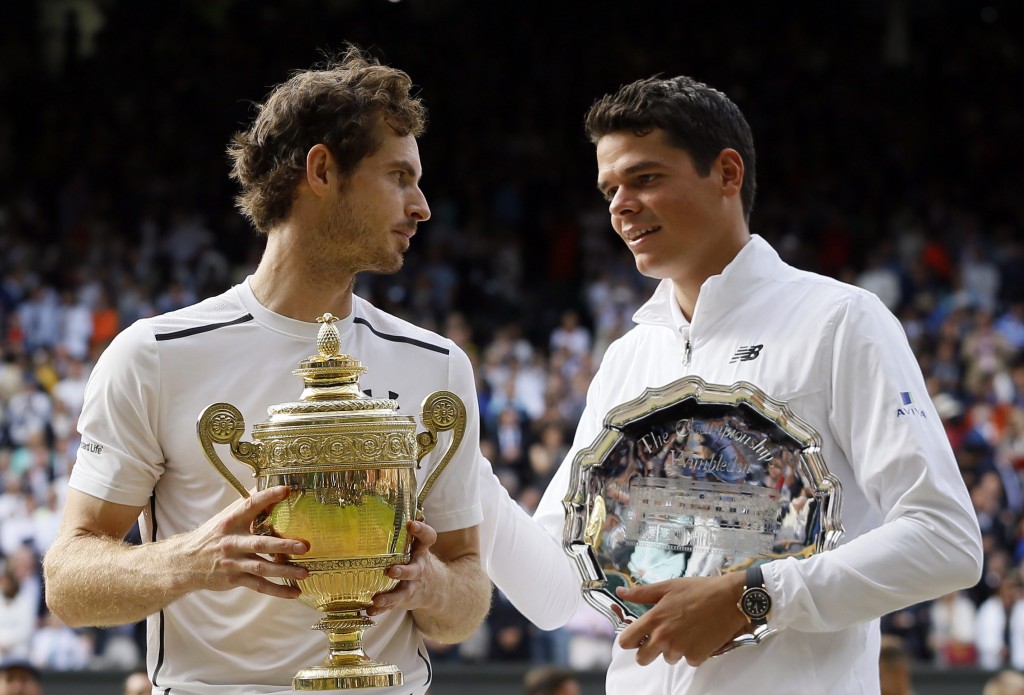 Andy Murray of Britain holds up his trophy after beating Milos Raonic of Canada, right, in the men’s singles final on day fourteen of the Wimbledon Tennis Championships in London, Sunday, July 10, 2016. (AP Photo/Kirsty Wigglesworth)

LONDON – Canada will have to wait a little longer for it’s first Grand Slam singles champion.

Milos Raonic of Thornhill, Ont., lost to Andy Murray in the Wimbledon final Sunday in the first major singles championship match to feature a Canadian man.

“This one’s going to sting,” Raonic told the BBC on the court moments after the match. “I’m going to make sure as the grass on these courts is green that I do everything that I can to be back here for another chance.”

“It’s been a phenomenal two weeks at this tournament … I keep plugging away, trying to get better to give myself these chances,” Raoinc said. “I’m going to continue to do the same because there’s nothing I want more than to be back here.”

Eugenie Bouchard of Westmount, Que., is the only Canadian female to play in a Grand Slam singles final. She lost to Petra Kvitova at Wimbledon in 2014.

Toronto’s Daniel Nestor is an eight-time major champion in doubles.

Murray broke Raonic’s serve only once in the match, while the Canadian had some chances in the third set but failed to convert.

Murray came into the tournament after losing to Novak Djokovic in the finals of both the Australian Open and French Open this year.

Three years ago, Murray became the first British man since 1936 to win the singles title at the All England Club. He also won the U.S. Open in 2012, a few weeks after winning the Olympic gold medal at Wimbledon.

The second-seeded Murray was playing in his 11th major final, but the first against someone other than Djokovic or Federer.

Raonic reached his first major final primarily on the strength of his speedy and intimidating serves, averaging 25 1/2 aces while being broken a total of only five times through six matches. But on a breezy afternoon, at a Centre Court filled with nearly 15,000 partisan fans, Murray basically shut down that integral part of Raonic’s game.

It’s been a rough few weeks for Britain, what with its vote to leave the European Union, the resulting drop of the pound’s value, and the subsequent resignation of Prime Minister David Cameron, who was seated in the front row of the Royal Box on Sunday, several seats over from Prince William and his wife, Kate.

Murray was even asked by a reporter during Wimbledon how it felt being Britain’s “last hope,” a question he jokingly dismissed by replying, “It’s not that bad, is it? Is it that bad?”

In a testament to Murray’s ability as a returner – a combination of timing and dexterity – it took Raonic 36 minutes and five service games to record his first ace. Over and over, Murray managed to get the ball back, even one that came in at 147 mph.

Raonic was limited to eight aces in all, only one more than Murray.

And while Murray only managed to break Raonic once, to lead 4-3 in the opening set, that was all it took, because the tiebreakers were both one-way traffic. Murray took 50 of 65 points he served across the first two sets, not only never facing so much as a break point in that span but only once being taken to deuce.

Finally, at 2-all in the third, Raonic got to 15-40 for his first – and, it turned out, only – break points, thanks to a forehand return winner off an 82 mph second serve. But Murray stood tall, taking the next four points to hold, then wheeling toward his box, pumping his right fist and yelling.

Murray finished with a mere 12 unforced errors, while Raonic had 29.