Ron MacLean: The arena is where we will gather to mourn, remember the Broncos

'When news broke about the accident in Humboldt, everyone headed for the rink. Canada itself is an endless arena. It houses our stores of energy and hope.' 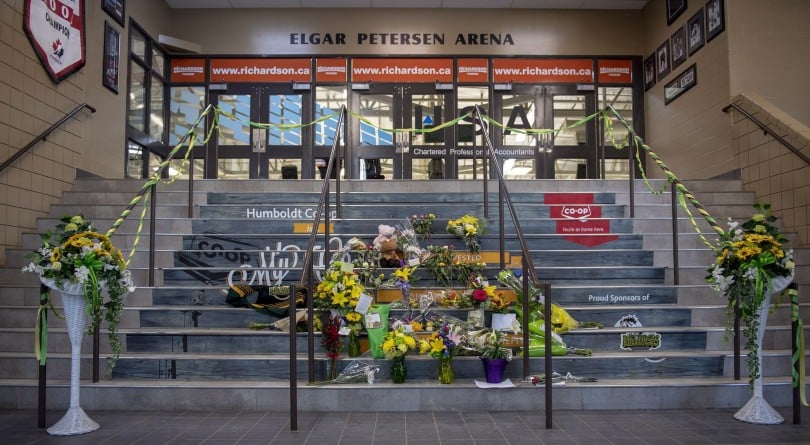 A memorial at the stairs that lead to Elgar Petersen Arena is shown in Humboldt, Sask., on Saturday, April 7, 2018. THE CANADIAN PRESS/Liam Richards

My first instinct was probably the same as yours.

I wanted to reach out, to hold the Humboldt Broncos tight, both the victims and their loved ones. I just wanted to sit in silence, to listen and to share. And to say the only three words that have ever mattered as much as life itself: I love you.

I sat staring at the one and only photograph of the accident scene, the shockingly blue sky and the carnage. Then I saw the team photo. I hoped that locks of their golden playoff hair could be kept. It would be nice if you could be certain of the hair, that beautiful, scented memory. If you could know that that was your young man.

Because of the 1986 Swift Current Broncos tragedy, I know that three decades from now, details will eventually help with acceptance, but that understanding will take some time.

FROM THE ARCHIVES: The 1986 Swift Current Broncos bus crash: Of tragedy and triumph

But it will happen. Great joys make us love the world. Great sadness makes us understand the world.

On December 30, 1986, Leesa Culp was 21-years-old and driving from B.C. back to Moose Jaw, Sask. in a vehicle travelling just behind the Swift Current Broncos’ team bus when she witnessed the accident.

She was the first person on the scene.

Although she did not know it at the time, it was the hand of Trent Kresse she held as he died. Trent was one of four Swift Current players who perished that day. When help arrived, Leesa left the scene. In 2007, Leesa sought out Swift Current broadcaster, Brian Costello.

She asked him: “Tell me about the dying boy whose hand I held. I don’t even know his name.”

That conversation spawned the book, Sudden Death: The Incredible Saga of the 1986 Swift Current Broncos. One of the stories in the book is about RCMP corporal Bob Harriman, the first to respond to the crash in ’86. Bob arrived knowing one of the players on the bus, Bob Wilkie, was billeting with his family. You can imagine the terror. Bob Wilkie survived. Trent Kresse, Scotty Kruger, Chris Mantyka and Brent Ruff did not.

READ: A 16-year-old phenom, a gifted captain and a beloved coach are among the dead in Humboldt bus crash

For 15 years from 1971-86, my father Ron worked for the RCMP as a dispatcher in Red Deer, Alta. as a civilian member of the force. When a crash occurred, Dad would work with RCMP officers on the highways to organize other first responders, such as air ambulance, and call for support.

One night in Killam, Dad and a lone officer dealt with a two-vehicle collision in which six people died and three others were injured. I recall the RCMP officer telling me how wonderful Dad was in the crisis. I was so proud of my father, and tried to imagine him quarterbacking the situation. On buses, victims often have identification in bags stored overhead or below the seat. When there is no identification on the person, it is a traumatic and confusing time. My heart also goes out to those who were at the scene near Tisdale. We can never thank you enough.

At the same time that Dad was working for the rural detachment of the RCMP, I was the junior hockey host and analyst for the Alberta Junior Hockey League’s Red Deer Rustlers. On the team bus, as we rolled up and down Highway 2, I would stare out the window at the lights of farm homes and wonder if the folks living inside ever listened to our broadcasts. About an hour outside of Red Deer, I figured our radio signal was too weak to reach those houses, so I thought: “Boy, the folks on Hockey Night in Canada are lucky. Their show reaches everywhere!”

The players on that bus peered out the window at their dream, while I was seeking mine. When I fly on dark and cold winter nights for our Sunday show, Rogers Hometown Hockey, I find myself looking down at the farm lights and recalling those trips and that dream. After the games we would go to great burger joints, like Peter’s Drive-In in Calgary, or the Saratoga Diner in Edmonton. On the ride home, I would stand in the wheel well by the front door next to our driver, Cliff, and chat with coach Wynne Dempster.

Just as I imagine Tyler Bieber, the now deceased reporter of the Humboldt Broncos, would have done. A soulmate.

On Saturday, I listened to Tom Straschnitzki the father of Humboldt defenceman Ryan, speaking on CBC from his Airdrie home. When asked what he would say to Ryan when he got to the hospital, Tom said: “I will not say a word. I am going to hug him until he says to get off.”

When news broke about the accident in Humboldt, everyone headed for the rink. Canada itself is an endless arena. It houses our stores of energy and hope. That’s where we first went upon hearing the news and it is where we will gather to remember.

There is nothing stronger than our capacity for regeneration. I hope those locks of golden hair are preserved. With that hair one can feel the intimacy of a team and its extended family.

And it can allow you say to your man what I am saying to you now: I love you.

Each month Maclean’s publishes essays, by Canadians, about the people they love—before it’s too late. Here’s how to submit yours.