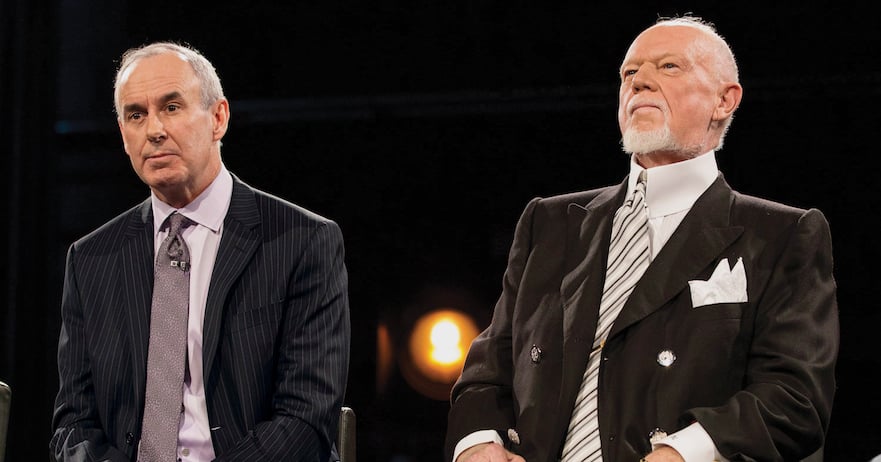 Ron MacLean (left) sits alongside Don Cherry as Rogers TV unveil their team for the station’s NHL coverage in Toronto on Monday March 10, 2014.

Ron MacLean says “nothing’s official” following a Toronto Star report he is poised to replace George Stroumboulopoulos as host of “Hockey Night in Canada” next season.

The longtime broadcaster says “there’s a few balls in the air and things like that” but until Sportsnet executives Scott Moore or Rob Corte “says it’s official, it’s not official.”

Citing industry sources, the Star reported Sunday that MacLean would return to main host’s chair, a spot he occupied for nearly 30 years.

Stroumboulopoulos became the host of “Hockey Night in Canada” in 2014 after Rogers acquired the NHL rights in a 12-year, $5.2-billion deal. (Rogers also owns Maclean’s.)

In an interview Sunday night, MacLean said he remains focused on those roles for now.

“I love ‘Rogers Hometown Hockey’ and Coach’s Corner. I’ve got those jobs as it is now,” he said. “I’m kind of focused on that and I think there’s this feeling that we may do more or that I may do more going forward but I can guarantee that it’s not solid yet until Scott Moore says it is.”

Moore, the president of Sportsnet and NHL properties, hinted earlier this month that there could be changes coming following a low-rated playoff run.

“We’re all kind of just looking at next year and trying to figure out what’s happening,” said MacLean.

Audience levels fell below the million mark for many early-round playoff games, which didn’t feature a single Canadian team. While ratings improved for the Stanley Cup final, they were down on average from last season.

Stroumboulopoulos is on a five-year deal while MacLean is in the middle of a four-year contract.

Sportsnet announced earlier this month that Cherry had signed a new multi-year deal.